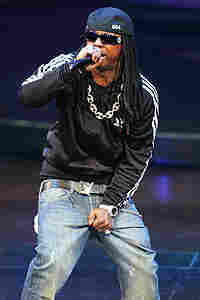 The hottest star in rap this year didn't release a record — at least not formally — in 2007. Instead, Lil Wayne crept to the top with mixed tapes and scorching performances.

Kalefeh Sanneh of the New York Times reports that Lil Wayne rose through the hip-hop ranks in New Orleans, with a group called the Hot Boys. By 2005, the last time he released a solo album, he referred to himself as the best rapper alive. "It turns out he has started to seem more and more right," says Sanneh.

Lil Wayne works his magic by grabbing other people's beats and rhyming over them, Sanneh reports. Lil Wayne sounds a bit like a frog, Sanneh says, and he packs the bluesy sound typical of New Orleans rappers.

"He was putting words together in a way that other people weren't," Sanneh argues. "This is one of the things that makes hip-hop so entertaining. Every few years someone gets in a zone, where they sound great, and they sound almost as if they're doing it unconsciously."