Accessibility links
Martirio's Freedom Songs Transcend Boundaries Martirio, the creation of vocalist and performance artist Isabel Quinones Gutierrez, expands the boundaries of flamenco and the traditional song called cancion — a mixture of verse and traditional Spanish music. Part of a generation of artists who came of age in post-Franco Spain, her music mixes flamenco with rock and pop. 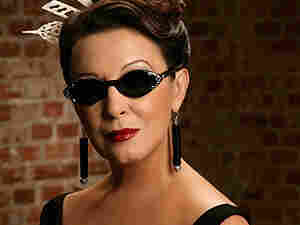 In her native Spain, vocalist Martirio is known for expanding the boundaries of flamenco and the traditional song called cancion — a mixture of verse and traditional Spanish music. Part of a generation of artists who came of age in post-Franco Spain, Martirio has become a favorite of critics and musicians in Spanish-speaking countries.

Martirio is the sunglasses-sheathed creation of vocalist and performance artist Isabel Quinones Gutierrez. In Martirio's music, rock and pop from America and folk music from Latin America mix with the flamenco culture of Andalucia in southern Spain, where Quinones grew up.

The Birth of Martirio

Quinones says she created Martirio to inspire Spaniards to explore personal and artistic freedoms after the death of dictator Francisco Franco in 1975.

"Martirio is meant to allow people to confront their true feelings and follow the path of their lives," she says, "so they are free to love whoever makes them happy, so they can validate their existence, so they can be free within themselves."

Quinones describes the musical and artistic philosophy of a woman who always dresses with a dramatic flair, a traditional flamenco hair comb perched atop her head — and who is never without her dark sunglasses.

"I developed my singing style, how I choose songs I will sing, how I present myself to an audience with the hair combs and sunglasses ... It's all within the context of the music I'm going to sing," she says.

Quinones says the music is a reaction to decades of being told what to listen to.

"During the era of Franco, there was lots of censorship in respect to all the arts," she says. "We were told by the government what to listen to, and it was music that didn't allow people to freely express themselves."

Music that was not allowed still got in from outside Spain — especially popular music and jazz from America.

Quinones was 21 when Franco died. She was already singing in clubs, and like Martirio, she embraced the new freedom by mixing flamenco with pop, traditional Spanish songs and rock.

On her most recent CD, Primavera en Nueva York, she has mixed things up again by setting boleros — an old style of love songs — to jazz.

"To make this kind of fusion, you must know the original intention of the composer, so the two styles flow naturally," Martirio says, adding that what jazz and flamenco have in common is a yearning for freedom.

Quinones cites flamenco's origins among the Roma, commonly referred to as gypsies, and compares that to the early African-American roots of jazz.

To get the two to work together, she says, she's had to tone down the flamenco vocal trills and pump up the shared emotions.

Despite the fact that Martirio is a fictional creation, she comes from a real place in Spanish history, according to producer Nat Chediak, a Grammy-winning Latin jazz producer who says he was drawn to the emotional integrity of her voice.

"Martirio is the truth; there is nothing phony or put-upon with her," Chediak says. "What you see is what you get."

What we get on Primavera en Nueva York is a song cycle about a woman falling in and out of love.

Quinones says she approached the love longs, the old boleros, the way a jazz singer would approach the work of the Gershwins or Jerome Kern.

"It was very emotional for me," she says. "I didn't have any of my familiar trappings of flamenco and completely dedicated myself to the music, the musicians and the words, the emotions of the composers."

As she reflects on what she's been able to accomplish in her music, Quinones wonders what might have been had it not been for Franco's de facto cultural blockage.

"Imagine if we didn't go through the years of dictatorship and the musical frontiers were open," she says. "Imagine Billie Holiday singing an emotion-drenched Spanish copla."

With that in mind, Quinones says that her dream is to record a double CD, one in Spanish and the other in English, offering two distinct cultural approaches to the same lyrics. For her, it would be her own way of creating the kind of world without musical borders that Spaniards were denied for so long.