Accessibility links
U.S. Troops Clear Insurgent Haven, Build New Base U.S. troops recently cleared out a key haven of al-Qaida in Iraq where insurgents are said to have trained recruits and built bombs used in suicide attacks across Iraq. But the fight in northern Babil province is far from over. As a U.S. base is being built, troops are working with tribal leaders to return order to the region. 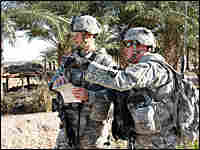 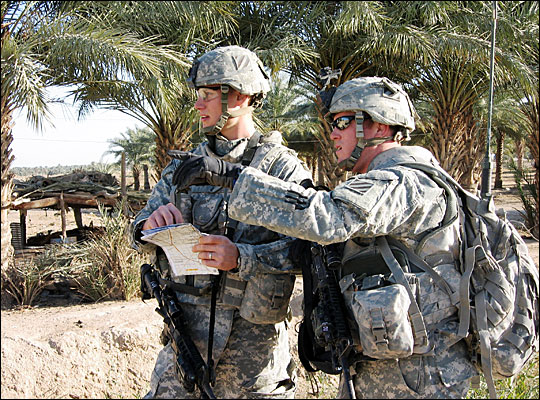 First Lt. Allen Von Plinsky (left) and Pfc. Scott Carlblom examine a map as they point toward a town in Babil province, Iraq. 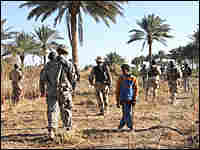 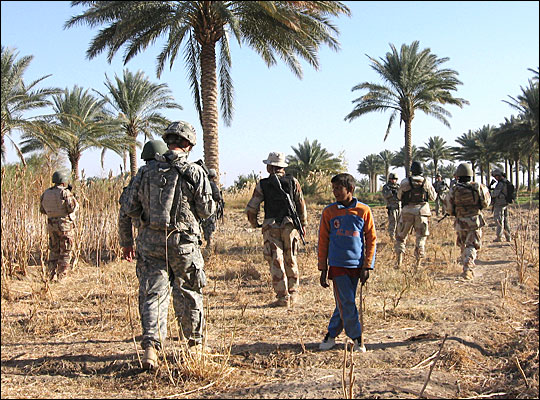 An Iraqi boy in Babil province watches the Bravo Company platoon on patrol.

U.S. troops recently cleared out a key haven of al-Qaida in Iraq where insurgents are said to have trained recruits and built bombs used in suicide attacks across the nation. Many insurgents fled when the Army's 3rd Battalion, 7th Infantry Regiment started building a small base a couple of weeks ago. But the military says the fight is far from over in the northern part of Babil province.

Intelligence-gathering is among many steps that the unit is taking to try to restore calm to the area, a sparsely populated mix of swamp, date groves and fish farms. The unit is acting at the request of local tribal leaders, many of whom were linked to insurgents only a few months ago. But the sheikhs, who belong to the same strict Islamic sect as al-Qaida in Iraq, have turned on the group — partly because of turf battles, but mostly because everyone here is tired of war.

A dozen American soldiers attached to Bravo Company and their Iraqi army counterparts move swiftly across fields of nettles and palm trees, their weapons at the ready. Their mission this day is to meet the new neighbors — Iraqi farmers who have started trickling back into the area after the U.S. forces arrived and al-Qaida in Iraq fighters fled.

But as the attack helicopters buzzing overhead suggest, the troops aren't here for a social visit. They are trying to find out whether the Iraqis are insurgents or sympathizers.

The first stop is a crumbling compound with a single-story home. Women in long robes and scarves peer out nervously from inside. Their children are more daring, lingering in the yard as Iraqi soldiers pound on the metal door at the back.

There are no men at home. The soldiers suspect they've run away because they have something to hide.

Suddenly, an Iraqi man herding sheep approaches the compound. The man greets the troops in Arabic and bids them to enter, which the troops do. Through an interpreter, Staff Sgt. Brad Cantrell and his men ask the Iraqi man and an older male relative whether they know of insurgents in the area.

The interpreter says, "He knows them — I mean the bad guys. He says he's got the roster."

Lt. Allen Von Plinsky says they take that with a grain of salt.

"A lot of them have rivalries amongst their tribes and stuff," Plinsky says. "We're just trying to figure out what is rivalry and what is really al-Qaida."

Something in the sheepherder's behavior makes the soldiers suspicious, so they take down his name and phone number and photograph his irises — a process similar to taking fingerprints. By cataloging the men, troops will be able to find them more easily if they turn out to be troublemakers.

The new relationships with Iraqi leaders and residents give troops a vital edge over the enemy. Lt. Col. Tim Newsome, the battalion commander, nurtures those relationships. At meeting Tuesday in the nearby town of Jurf al Sakhar, over platters of lamb and rice, Newsome asks sheikhs and tribal leaders about trouble spots.

"These irreconcilables who are going to operate in and amongst our populations, they've got to be killed and captured," Newsome says.

He says he's interested in creating additional squads of Iraqi men hand-picked by the sheikhs to set up checkpoints and gather intelligence on insurgents. The sheikhs quickly provide a list of 100 candidates for the "concerned citizens patrols."

Armed with AK-47s and reflective armbands to identify them to U.S. and Iraqi forces, the citizen patrols provide vital intelligence to thwart insurgent activity. They receive a monthly stipend for their trouble.

It's a program that, in Newsome's area of operations, costs more than $1 million each month. But U.S. military commanders say employing local men for such patrols keeps them from being recruited by al-Qaida in Iraq.

Building a Patrol Base

Back in al Khidr, the sparsely populated area where the Bravo Company was on patrol, company commander Capt. James Hart is busy getting his new patrol base up and running. With the sheikhs' blessing, he and his men moved into the area less than two weeks ago.

At the moment, the base amounts to a patch of sand ringed by thick blast walls made of wire, cardboard and dirt. Hart's office for now is the damaged headquarters of the Islamic State of Iraq, an al-Qaida-linked group. All that's left of the group are its slogans written in charcoal on the walls.

Hart says the building will be torn down as soon as the base is ready next month.

He says getting here was difficult, mainly because insurgents lined the road leading to the new base with bombs. A U.S. soldier, Sgt. Samuel Kelsey, died diffusing those bombs. The new base is named for him.

Hart says air strikes and artillery fire hours before they moved in destroyed most of the al-Qaida hangouts and munitions. How many enemy fighters were killed is unclear.

"Estimate 15 to 20, but we never recovered any," Hart says. "Some fighters, financiers, the harborers, a lot them have blended back into the population pool. We'll spend the next couple months trying to dig them out. The real important guys had either run off or disappeared into other safe havens.

"We detained a few people here and there, we questioned some people, and there are some we got our eyes on that we don't have the facts yet to prove they are guilty."

One clear success has been the American recapturing of a key canal that provides water to the nearby city of Iskandaria. The militants used it as a tool to terrorize Shiite residents.

"The ministry of water just sent a rep back up here, and he's now operating this dam, because ... AQI had opened it up, and they were flooding out the Shiite apartments down in Iskandaria, all the way down there," Hart says. "So right now, we are keeping it blocked off until we get established, and then we'll open it back up for civilians to move back into the area."

Getting Iraqis back into their homes and to work is the only way to stop this war, says Brig. Gen. Jim Huggins, deputy commanding general for maneuvers, who recently visited the new patrol base.

"And eventually, what you'll see — because this is a pretty fertile area in Iraq, you'll see it be repopulated, and then life will start to get more like their normal," Huggins says. But that doesn't mean there won't be setbacks, he says.

"We know the enemy won't like us here, and typically, where we go where we haven't been before, he'll try and mount some sort of attack. But that's why we plan pretty thoroughly when we come in, and we think we'll be fine," Huggins says.