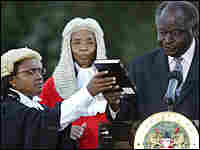 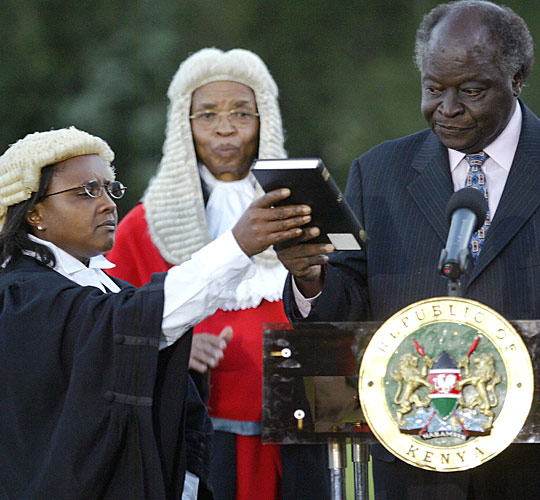 Newly re-elected Kenya President Mwai Kibaki (R) is sworn in for a second term on Sunday.

Kenyan President Mwai Kibaki has taken the oath of office for a second term amid widespread protest.

Kibaki claimed a dramatic, come-from-behind victory over challenger Raila Odinga in the tightest presidential race in Kenya's history. Fewer than 300,000 votes separated the two candidates in the final tally.

Odinga, his many supporters and even international observers question the tally.

Kibaki took the oath of office less than an hour after the results were announced, but his appeal for unity rang hollow throughout much of Kenya.

Armed soldiers and police were in full force, and live television news broadcasts were snatched off the air.

"This is Raila's time. That's what I know. Raila's time to be president is now," said Kelley Omondi. He called the election results bogus and said Kibaki should have conceded.

"Remember, there are times in the U.S.A. when Bush and Gore, they were fighting it out. Al Gore, he conceded," Omandi said.

International observers also disputed some of the results.

"The figures of President Kibaki have been inflated by as much as 300,000 votes. That is the kind of rigging we are talking about," said Odinga.

Odinga had been poised to become Kenya's first ethnic Luo president. At the Election Commission on Sunday he called for a recount.

"You can see the chairman here is under a lot of pressure, completely. But we want to tell the members of the commission, the destiny of the country is in their hands," he said.

The commissioners then quietly moved to another room at their headquarters and called Kibaki the winner by fewer than 300,000 votes. Within minutes, riot police were on the street and Kibaki was sworn in.

Andrew Ndegwa, a resident of the Kibera slum dominated by Luos, said he has a different set of problems with the Kibaki win. He is a Kikuyu, the same ethnic group as Kibaki. Ndegwa said Luos are now after the Kikuyus.

"If they find any Kikuyu person loitering around, they just start cutting. Many of our people are going. My wife, I don't know where she is going to escape," he said.

Kibaki has declared Monday a national holiday; the Odinga camp is planning an alternative inaugural ceremony. 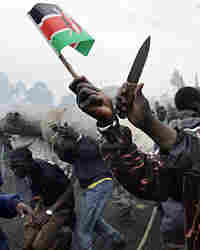 Odinga called on 1 million people to gather Thursday in Nairobi's Uhuru Park — where protesters converged to demand multiparty democracy in the early 1990s. He later postponed the rally to Monday after police warned the opposition party not to hold it.

Kibaki, 76, was sworn in almost immediately after the results were announced. Within minutes, the slums exploded into fresh violence.

Suspicions over rigging were fueled by the fact that the opposition took most of the parliamentary seats in Thursday's vote, but Kibaki still won the election.

Police fired tear gas, and several officers said they had orders to shoot to kill. A government spokesman denied such an order was given.

Opposition supporters from the Luo ethnic group said they would risk death to protest what they called a stolen election. Demonstrators were beaten back with tear gas and water cannons, and police fired live rounds over their heads in Nairobi's burning slums.

"We have been rigged out, we are not going to accept defeat," said 24-year-old James Onyango, who lives in Nairobi's Kibera slum. "We are ready to die and we're ready for serious killings."

Odinga, the fiery opposition leader who came in second according to the official results, compared Kibaki to a military dictator who "seized power through the barrel of the gun."

"We are calling for mass action," said Odinga, who had been leading early results and public opinion polls. "We will inform police of the march. We will march wearing black arm bands because we are mourning."

An Associated Press reporter saw a man who had been shot in the head being carried in a blanket. Men around him said he had been shot by police. Police were not immediately available for comment.

Teams of riot police fired shots into the air and tear gas into homes and businesses; in one home, a woman and her four young children ran out, retching.

"We were just hiding from the shots," said Dorothy Nyangasi, who frantically poured water over the eyes of her 6-month-old old son, Daniel.

One 14-year-old girl said police had shot her brother and another man in the stomach. Shortly after she spoke to reporters she was arrested and taken away crying in a marked police vehicle.

U.S. officials expressed concern over serious problems during the counting of votes.

"Those alleging vote tampering may pursue legal remedies and should be able, consistent with respect for freedom of speech, to make their case publicly. We call on the judiciary to play its role expeditiously," a statement from the U.S. embassy in Kenya said.

Kenya is one of the most developed countries in Africa, with a booming tourism industry and one of the continent's highest growth rates. Many observers saw the campaign as the greatest test of this young, multiparty democracy and expressed great disappointment as the process descended into chaos.

Kibaki's supporters say he has turned Kenya's economy into an East African powerhouse, with an average annual growth rate of 5 percent. He won by a landslide in 2002, ending 24 years in power by the notoriously corrupt Daniel arap Moi. But Kibaki's anti-graft campaign has largely been seen as a failure, and the country still struggles with tribalism and poverty.

The election violence had a disturbing tribal undertone in the slums, where youths shouted ethnic slurs. Kibaki, from the Kikuyu tribe, has been accused of maintaining the tribal patronage system of the Moi years. Odinga is a Luo, another major tribe. 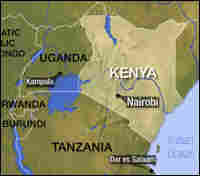 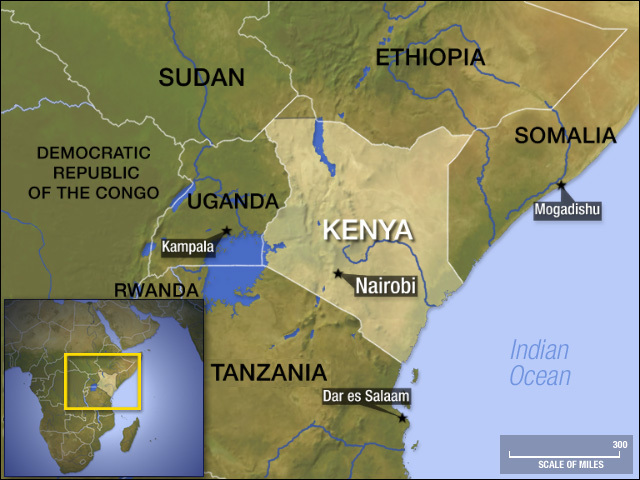 Kenya President Mwai Kibaki and his wife, Lucy, wave to supporters after Kibaki presented his nomination papers to the Electoral Commission of Kenya in November. Simon Maina/AFP/Getty Images hide caption 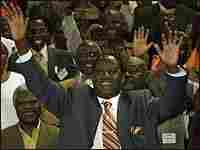 Presidential hopeful Raila Odinga salutes surpporters after he is nominated to vie for the presidency of Kenya in September. AFP/Getty Images hide caption

Kenya is set to choose its next president and other political leaders Dec. 27. Several candidates are up for the country's main leadership role, but it is coming down to a battle between the incumbent, Mwai Kibaki, and the main opposition candidate, Raila Odinga.

Here's more on the elections and the issues at stake:

What's on the ballot?

Kenya's 14 million eligible voters will choose a president, more than 200 members of parliament and more than 2,000 local councilors.

The election will determine political control of one of the most vibrant economies in East Africa. Kenya's capital, Nairobi, is the main financial, transportation and communications hub for the region.

Kenya is also one of the most stable countries in an unstable area. It borders Sudan, Ethiopia and Somalia, all of which are currently involved in violent internal struggles or tensions with other nations.

Why should Americans care?

The Kenyan government's cooperation is critical to U.S. efforts to combat terrorist groups such as al-Qaida. Kenya has been a way station for terrorists and the site of violent attacks, including the 1998 bombing of the U.S. Embassy in Nairobi, which killed 213.

Who are the key candidates for president?

Current President Mwai Kibaki is running for a second five-year term. His strong points include an economy that has grown steadily over the past five years, and a record of working for social reforms, such as free primary education. His weak points include his advancing age — he's 76 — and a failure to deal with widespread government corruption.

Kibaki's leading opponent is Raila Odinga, 62, who served as a minister in Kibaki's government but has been campaigning as an agent of change. He says he can improve conditions for Kenya's poor majority. Odinga spent nine years in jail for opposing the government of former dictator Daniel Arap Moi.

The third-ranking candidate is Kalonzo Musyoka, 53, whose campaign has stressed his evangelical Christianity. Musyoka trails the leading candidates in the polls, but he could influence an election that's expected to be very close.

What are the main issues?

Economic inequality is a key issue in a country the economy has been improving, but most people still live in poverty. Corruption is considered widespread at all levels of government, and several major government procurement scandals have taken place over the past five years. Violent crime is also a serious issue in major cities, especially car-jackings and robberies. Tribalism will play a major part in the voting, because Kenya has more than 40 tribes. The dominant Kikuyu tribe is supporting Kibaki, who is one of its own. The Luo, the second largest tribe, and most other minority tribes have given their support to Odinga.