Accessibility links
Our Characters, Ourselves: 'In Character' From NPR From Darth Vader to Scarlett O'Hara, the best fictional characters reflect something about who we are and how we got here. In Character, a six-month series from NPR, explores indelible American characters from fiction, folklore and pop culture.

Listen
Our Characters, Ourselves: 'In Character' From NPR 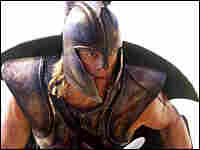 Tragically flawed: Achilles (Brad Pitt in the 2004 film Troy) is one of the prototypes that define our sense of what makes an unforgettable character. Warner Bros. Pictures hide caption

The 'In Character' Blog: Tell Us Which Characters Changed You 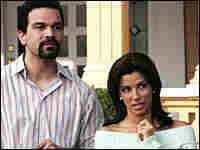 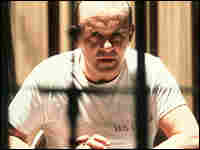 He sees you: Actor Anthony Hopkins says he explored dark fascinations we all harbor, but few of us acknowledge, to discover the character of Hannibal Lecter. MGM hide caption

From Darth Vader to Scarlett O'Hara, the best fictional characters reflect something about who we are and how we got here. That's why today we're launching In Character, a new NPR series exploring indelible American characters from novels, movies, television and popular culture.

To kick off the series, NPR's Elizabeth Blair took a look at what makes a great character — and what it takes to create one.

Pop Culture on the Couch

Blair starts the deconstruction on the psychologist's couch — with help from Linda Edelstein, who asks her graduate counseling-psychology students at Northwestern University to analyze characters and relationships from pop culture. One prime subject: The perfectionist Beth Jarrett, from Judith Guest's Ordinary People. (Mary Tyler Moore played her in the 1980 film.)

Unforgettable characters aren't simply an American phenomenon, of course. They've illuminated human behavior for centuries. That's why Blair talks to Bard College classics professor Bill Mullen about the iconic Greek figures Achilles and Odysseus: Mullen says that we're all born one or the other: either an Achilles, the raging, passionate fighter who dies young; or an Odysseus, the calculating strategist who survives.

Both Achilles and Odysseus were kept alive in oral traditions for centuries before Homer finally wrote them down. Mullen says they "taught people what they needed [to know] to survive and thrive emotionally."

But not, he stresses, because they were role models. For a character to mean something, Mullen says, he or she must have something else the Greeks knew about: an Achilles' heel.

"Aren't we really interested in seeing how someone who we do admire nevertheless has weaknesses?" Mullen asks. "And how with those weaknesses he develops, how he comes out on the other side?"

Many characters, in fact, are defined by their imperfections or their problems. Take the women of Desperate Housewives, for instance. Mark Cherry, the show's creator and executive producer, tells Blair he was inspired by the ultimate desperate housewife: Lady Macbeth.

Murderous ambition, in suburbia? We've all felt a dark urge, admit it or not. Anthony Hopkins, who played serial killer Hannibal Lecter, told WBUR reporter Andrea Shea that to create that unforgettable character, he tapped into something inside himself that most of us might be afraid to touch.

"I've always had a sneaky fascination with the shadowy world that's in us all," Hopkins says.

How do writers create such striking creatures in the first place? Stewart Stern — co-writer of Rebel Without a Cause, the 1955 James Dean classic that revealed the angst-ridden teenager as emotionally vulnerable — tells Blair that he teaches his own students to fully imagine a character's life and world before they write a single word.

"You don't have to tell the audience what your discoveries were, but you have to have it in your body when you're writing it," Stern explains. "Or you don't know what will come out of their mouths."

These fully conceived characters often do the things we couldn't, wouldn't or shouldn't. The superhero flies. The wisecracker says things we think about saying, but don't. The villain does the unthinkable.

And when we get to know them, we learn something about ourselves.