Accessibility links
Post-Election Kenya Violence Claims More Lives Amid continued post-election violence in Kenya, at least 50 people are killed when a mob sets fire to a church west of the capital, Nairobi. Opponents to re-elected President Mwai Kibaki, who was sworn in Sunday, say the vote was rigged.

Amid continued post-election violence in Kenya, at least 50 people are killed when a mob sets fire to a church west of the capital, Nairobi. Opponents to re-elected President Mwai Kibaki, who was sworn in Sunday, say the vote was rigged.

And we start this part of our New Year's Day program in Kenya. At least 250 people are now reported killed in post-election violence there. The conflict began on Sunday when election results returned incumbent President Mwai Kibaki. But the challenger, Raila Odinga, has refused to concede the vote. And the nation has been paralyzed by ethnic conflict and a de facto state of emergency.

NPR's Gwen Thompkins is in Nairobi.

GWEN THOMPKINS: What began as a political contest in Kenya has become a reckoning. Since President Mwai Kibaki took the oath of office on Sunday evening, much of the nation has been burned and looted, and people raped and killed. The ethnic groups that supported challenger Raila Odinga are in conflict with those that supported Kibaki. Earlier today in western Kenya, a Catholic church harboring women and children who had been burned out of their homes was itself burned. Aid workers estimate that at least 50 people were killed.

Mr. MAINA KIAI (Chairman, Kenya National Commission on Human Rights): Innocent Kenyans did not do anything wrong. They exercised their right to vote whichever way they did it. And that's - they're not the problem.

THOMPKINS: Maina Kiai heads the Kenya National Commission on Human Rights. The commission is calling on Kibaki and Odinga to do more to end the violence.

Mr. KIAI: What we suggested is for Nelson Mandela moments, where the political leadership reaches out to the other side in dramatic gestures.

THOMPKINS: On the face of it, Kenya is experiencing a backlash against Kibaki's tribespeople, the Kikuyu, and the other tribes that are seen as Kibaki supporters. The Kikuyu are the nation's largest ethnic group. They are perceived by Odinga's supporters to have prospered unfairly during Kibaki's first term.

Cecilia Wanjira, a Kikuyu in the Kalanguari slum of Nairobi, watched her neighbors from different ethnic groups burn everything on her plot of land.

Ms. CECILLA WANJIRA (Kikuyu): We want peace. We don't want that war because they are our brothers and sisters.

THOMPKINS: But the dead and wounded across Kenya include many of Odinga's people as well, the Luo and other tribes sympathetic to the Luo. Across the nation, people are being told to stay in their homes or at some other shelter where they feel safe. Most businesses have not been open since Christmas Eve. Hooliganism is rampant. Hunger is increasing. The government has banned public demonstrations. Live television broadcasts are off the air, and security forces are on red alert. As Kibaki and Odinga remain at a standstill, so does everyone else.

Mr. ALEXANDER GRAF LAMBSDORFF (Chief Observer, Election Monitoring Delegation, European Union): We find that these elections have fallen short of key international and regional standards for Democratic elections to which Kenyans committed themselves.

THOMPKINS: Alexander Graf Lambsdorff heads the European Union's election monitoring delegation. He says Kibaki may have had the most votes, but the mistakes made in the tallying have eroded his confidence in the veracity of the final count. He's calling for an independent investigation into the matter. Kiai, of the Commission on Human Rights, is calling for a recount. But for now, Kiai says, he would sell for some goodwill food.

THOMPKINS: As of now, no one can tell if the situation is getting better or worse. On Wednesday, many Kenyans expect to go back to work. And some say that normalcy will prevail. One Kikuyu tour operator in Nairobi seemed confident that his tribespeople will quickly recover from this time of trouble. We Kikuyu are so many, he said, we are mighty. 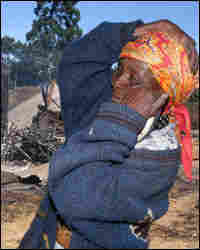 A woman reacts outside a Kenyan church that was torched by a mob Tuesday in violence following a disputed presidential election. Up to 50 people died in the church. Stringer/AFP/Getty Images hide caption 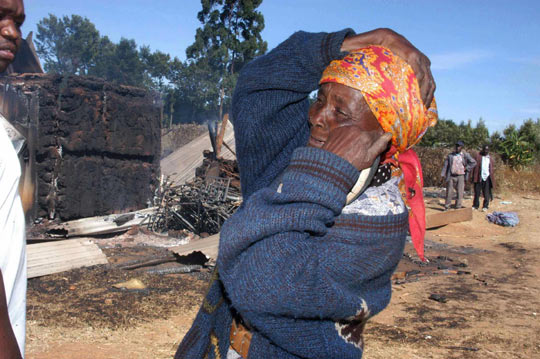 A woman reacts outside a Kenyan church that was torched by a mob Tuesday in violence following a disputed presidential election. Up to 50 people died in the church. 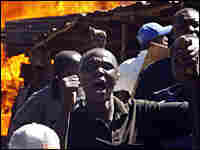 Residents of the Mathare slum in Nairobi, Kenya, shout at demonstrators during clashes between two rival groups on Tuesday. Tony Karumba/AFP/Getty hide caption

Up to 50 people died Tuesday when a mob torched a Kenyan church in the fourth day of ethnic violence that erupted after the disputed presidential election.

President Mwai Kibaki was sworn in Sunday after a vote that opponents say was rigged. On Tuesday he called for a meeting of political parties and made an appeal for an end to the riots.

At least 270 people have died in what had been east Africa's most stable and prosperous democracy.

Kibaki's opponent, Raila Odinga, refused to meet with his rival.

"If he announces that he was not elected, then I will talk to him," Odinga said. He accused the government of stoking the chaos, saying Kibaki's administration is "guilty of genocide."

The violence - which has erupted from the shantytowns of Nairobi to resort towns on the sweltering coast - has exposed tribal resentments that have long festered in Kenya. Kibaki's Kikuyu people, Kenya's largest ethnic group, are accused of turning their dominance of politics and business to the detriment of others.

Odinga is from the Luo tribe, a smaller but still major tribe. In the slums, which are often divided along tribal lines, rival groups have been going at each other with machetes and sticks as police fire tear gas and live rounds to keep them from pouring out into the city center.

The church fire in Eldoret, some 185 miles from the capital, killed at least 50 people, said a Red Cross volunteer who counted the bodies and helped the wounded. But she asked that her name - which would identify her tribe - not be published, saying gangs were even checking on the tribal affiliations of aid workers.

Anne Njoki, a 28-year-old Kikuyu, said she fled her home in the slums after she saw Kikuyus being attacked and their homes looted. She was camped out near a military base with her sister, 3-year-old nephew and 7-year-old niece.

"They have taken our beds, blankets, even spoons," she said of the looters. The children had not eaten for days.

The European Union and the United States have refused to congratulate Kibaki, and the EU and four top Kenyan elections officials have called for an independent inquiry.

"The violence must be brought to an end," he said Tuesday in London.

Also Tuesday, Odinga insisted he would go on with plans for a march of a million people in the capital Thursday against Kibaki, who had been trailing Odinga in early election results and opinion polls before pulling ahead.

The government banned the demonstration, but Odinga said: "It doesn't matter what they say."

The widespread violence and gathering international pressure could pressure Kibaki to compromise. Riots also have been raging in opposition strongholds in western Kenya, the tourism-dependent coast and the Rift Valley.

"The car had 14 people in it, but they only slashed Kikuyus," said Boniface Mwangi. Five were attacked by the machete-wielding gang, others robbed, he said.

In Nairobi's slums - home to a third of the city's population - parents searched for food with many shops closed because of looting.

Winnie Nduku, 34, said she and her three young children hadn't eaten in three days and the family had no money because her husband, a minibus driver, had been unable to get to work.

"My eldest daughter keeps asking what am I going to do and the small one is crying from hunger," she said.

Kibaki 76, won by a landslide in 2002, ending 24 years in power by Daniel arap Moi. He is praised for turning the country into an east African economic powerhouse with an average growth rate of 5 percent, but his anti-graft campaign has been seen as a failure, and the country still struggles with tribalism and poverty.

Odinga, 62, cast himself as a champion of the poor. His main constituency is the Kibera slum, where some 700,000 people live in poverty, but he has been accused of failing to do enough to help them in 15 years as a member of parliament.