Accessibility links
Baby Boomers Begin to Claim Social Security The first of the baby boomers will turn 62 this year and become eligible to claim retirement benefits. But a "baby bust" means there are fewer workers paying into the Social Security system to support each retiree. 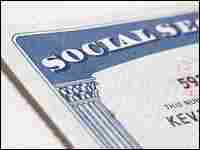 There are nearly 80 million baby boomers, Americans born between 1946 and 1964. iStock hide caption

For decades politicians, pundits and scholars have been warning about the looming retirement of America's baby boom generation and its impact on Social Security.

Well, the baby boom's retirement is not just looming anymore .... It's here.

This year, the first of the baby boomers will turn 62 years old and become eligible to claim Social Security retirement benefits. The Social Security Administration projects that about a million of those first baby boomers, people born in 1946, will take the early retirement option even though their monthly checks will be 25 percent lower than if they waited until they are 66, the normal retirement age.

In all, there are nearly 80 million baby boomers, Americans born between 1946 and 1964. They've had a big impact on American culture and they'll have a big impact on Social Security's finances. That's because they had a lower fertility rate than their parents and grandparents. Baby boom females had, on average, just under two children, down from more than three children per woman in previous generations.

That "baby bust" means there will be fewer workers paying into the Social Security system to support each retiree. Instead of three workers per retiree, there'll be just two.

Then, if nothing is done to shore up the system, payroll taxes will cover just 75 percent of promised benefits. To bring the system back into financial balance Congress and the president will have to agree on tax increases or benefit cuts, or both. If they decided to just raise taxes to solve the problem they could make the system solvent for the next 75 years by boosting the payroll tax 1 percentage point for workers and 1 percentage point for employers, according to the Social Security Trustees annual report for 2007.

Despite the often overheated rhetoric about Social Security, its financial problems could be easily solved by modest tax increases and benefit cuts.

An even bigger problem facing the country is the rising cost of medical care. As a result, the projected cost of Medicare and Medicaid will jump more than seven times faster than the cost of Social Security over the next four decades.