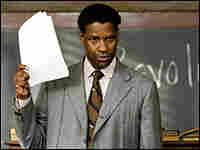 Denzel Washington directs and stars in the new film The Great Debaters, inspired by the true story of Wiley College's winning debate team of the early 1930s. The film also stars Forest Whitaker.

Washington made his directorial debut with the film Antwone Fisher; he won Oscars for his performances in Training Day and Glory.

His other films include Mo' Better Blues, Cry Freedom, John Q, Man on Fire, Devil in a Blue Dress, and Malcolm X. 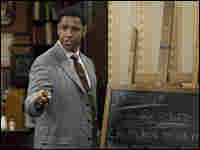 Denzel Washington directs and stars in The Great Debaters, a film about a debate team from a historically black college competing against a team from a white college in 1935. David Lee/TWC 2007 hide caption

In 1935, Wiley College, a historically black college in Marshall, Texas, fielded a debate team that went largely undefeated. It did so well, in fact, that it was invited to debate a team from a white college, an event almost unthinkable in the Jim Crow era of racial segregation.

The preparation for that historic event is chronicled in somewhat fictionalized form in a formulaic but affecting drama directed by Denzel Washington and produced by Oprah Winfrey. Washington stars as professor Melvin B. Tolson; Forrest Whitaker plays fellow prof James Farmer, whose namesake son grew up to be a civil rights leader. The younger Farmer is played by 17-year-old Denzel Whitaker (who is related to neither of his co-stars).

The film is essentially a sports-underdog story centering on debating, and anyone who knows how sports-underdog stories generally go will have no trouble predicting the outcome. Still, formulas become formulaic because they work, and this variation champions literacy, reading, hard work and kids who use brains rather than brawn to triumph against tough odds.

Some early scenes are so powerful — a white sheriff and farmers breaking up a sharecropper's meeting, a lynching, a trip to a neighboring college that takes the team past a lynching — that their effect is to diminish the dramatic impact of the big debate — it's a little like following up a war with a game of bridge. And the composite characters and event-inflation (Wiley debated the University of Southern California, but there's no evidence that the team debated Harvard, as happens in the film) make the history lesson seem a bit suspect. Still, Washington's work is solid both in front of and behind the camera, and the other performances are all striking.