Accessibility links
Patti Austin in Concert Fresh off a Grammy nomination for her latest album (Avant Gershwin), the veteran vocalist performs "A Gershwin New Year's Eve," live from the John F. Kennedy Center for the Performing Arts in Washington, D.C. 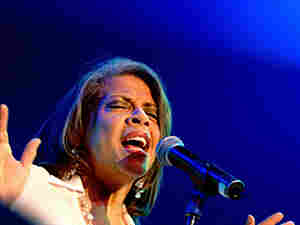 A professional singer since early childhood, Austin has straddled pop, R&B and jazz for decades, both as an in-demand session musician and as a prolific solo artist. Her latest release updates the catalog of the brothers Gershwin with challenging interpretations, and features the complex arrangements of the WDR Big Band.

"Sheathed in a snug gown, she looked glamorous and sounded even better, accompanied by a horn-powered octet and inspired by a series of fresh interpretations of Gershwin tunes arranged by Michael Abene [of the WDR Big Band]," wrote Mike Joyce in the Washington Post.

WBGO Newark and NPR present Patti Austin in concert, on Toast of the Nation.