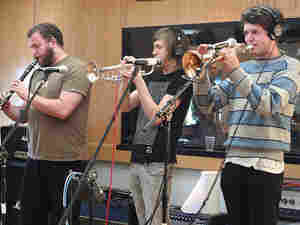 Performing live on KEXP for the third time in a third different city, Beirut proved its tirelessness in this in-studio appearance, having arrived at Engine Studios in Chicago the morning after an overnight drive from Montreal, where it had just performed.

"My first thought seeing them in the studio was that I wanted to get them a hot meal and warm shower," recalls John Richards, host of The Morning Show and this session. "You see them, and they're so funny and nice to be around, and you just want to put them up in a nice hotel and take them out to buy nice new clothes. They'd say no, but you just want to take care of them to make sure they're playing music for years."

Without hesitation, the members of Beirut set up in a circle and proceeded to perform six songs, five of which would appear on their 2007 album The Flying Club Cup, set to be released just a week after this performance.

"They were able to transform a friendly and warm but ultimately generic studio into a timeless Eastern European cafe for the 25 minutes that they played," says Aaron Starkey, KEXP's Manager of Online Services, who witnessed the performance. "The music echoed both the weariness of the road and the innocence of being young and on the road. What struck me the most about their performance was the passion by which the instrumentalists played. [Singer] Zach Condon was in perfect form as he led the circle of musicians through the songs in such a way that they could not have mustered any more passion if their lives had depended on it."

Richards says he was also struck by the band members' unflagging enthusiasm for their musical calling: "As always, this band of modern gypsies brought up every instrument you could think of, and even at an early hour and worn out with tour fatigue, they were in good spirits and debuted the new record live on the air." For fans already familiar with The Flying Club Cup or even Beirut's previous KEXP performances, Richards adds, "The beauty of this band is hearing the live versions of the songs recorded for the album. They are always a little different and often have a new edge to them. After they played, they quickly packed up and headed out to get ready for their next show, leaving KEXP with one of the best in-studios of 2007."

Recording under the name Beirut is Santa Fe native and Brooklyn resident Zach Condon, who discovered Balkan music while living abroad and brought its influences back home to the music that he had been making since he was a teenager. After recording his debut, Gulag Orkestar, in his New Mexico bedroom, Condon assembled a collective of musicians to re-create its concepts live. Drawing also from Condon's time spent in Paris with busking musicians, Beirut's albums, particularly 2007's The Flying Club Cup, effortlessly blend Western and Eastern European styles. Thanks to Internet buzz, prolific songwriting, and frequent touring, Beirut has become both a critics' darling and a fan favorite.