Accessibility links
FBI Seeks Help in Solving Skyjacking Mystery The FBI is asking amateur detectives to help write the final chapter of a 36-year-old mystery. Last month, the bureau reopened the case of the airline hijacker known as Dan Cooper, who bailed out of a plane with $200,000 in extortion money in 1971. 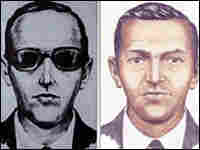 Sketches of the 1971 hijacking suspect known as Dan "D.B." Cooper. The FBI is asking the public to help solve the case. Federal Bureau of Investigation hide caption 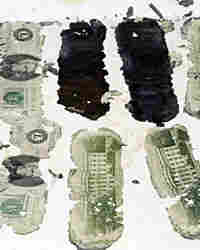 A boy found some of the extortion money while walking by the Columbia River near the Washington-Oregon border in 1980. Federal Bureau of Investigation hide caption

The FBI is asking amateur detectives to help write the final chapter of a 36-year-old mystery.

Last month, the agency reopened the case of the airline hijacker known as Dan "D.B." Cooper, who bailed out of a Northwest Orient airplane with $200,000 in extortion money in 1971.

Cooper vanished after the jump, and his true identity has never been discovered. Now, the FBI is releasing sketches of the legendary hijacker, a map of the area where he could have landed and a handful of photos from the case. They've also unveiled a Web site dedicated to solving the crime.

"Help us solve the enduring mystery," the Web site entreats. "Who was Cooper? Did he survive the jump? And what happened to the loot, only a small part of which has ever surfaced?"

"Maybe a hydrologist can use the latest technology to trace the $5,800 in ransom money found in 1980 to where Cooper landed upstream, or maybe someone just remembers that odd uncle," he said on the FBI's posting.

The mystery unfolded the night before Thanksgiving in 1971 when a man calling himself Dan Cooper used cash to buy a one-way ticket to Seattle at the Northwest Orient Airlines (now Northwest) counter in Portland, Ore.

During the flight, Cooper handed the flight attendant a note saying he had a bomb in his briefcase and wanted $200,000 in $20 bills and four parachutes.

When the flight landed in Seattle, Cooper took the money and parachutes and let the 36 passengers go. He then directed the pilot to take him to Mexico City.

At about 8 p.m. — somewhere between Seattle and Reno, Nev. — Cooper went to the back of the plane and jumped into the pitch black night in the midst of a driving rainstorm. The plane landed safely, but no trace of Cooper was ever found.

Nine years later, 8-year-old Brian Ingram found $5,800 of the extortion money when he was vacationing with his family.

Ingram, who is now 36 and lives in Mena, Ark., said he found three bundles of deteriorated $20 bills while looking for firewood on the sandy banks of the Columbia River near the Washington-Oregon border.

Ingram said he got to keep only half of the money — the other half was turned over to Northwest's insurance carrier, which had paid the $200,000 extortion.

Most of the money has deteriorated into small pieces, but he still has 13 half-bills and nearly 20 that are still intact. Ingram said he wants to keep at least one of the bills for his family, offer one to a museum and auction off the rest. He said he thinks the bills could bring enough to put a child through college.

Photos of the tattered bills are posted on the FBI's Web site, and Carr is hoping they might provide a clue to Cooper's landing site — or his body.

Carr said most agents believe it's unlikely that Cooper survived the foul weather jump into such rugged, heavily forested country.

"Diving into the wilderness without a plan, without the right equipment, in such terrible conditions, he probably never even got his chute open," Carr said.

Over the years, the legend of D.B. Cooper has grown, serving as fodder for countless news articles, a movie and ballads.

On Monday, the FBI decided to take another stab at solving the case. The bureau released drawings of Cooper that were made from the descriptions of two flight attendants and witnesses on the ground.

They all described a middle-aged man with brown eyes.

"The two flight attendants who spent the most time with him on the plane were interviewed separately the same night in separate cities and gave nearly identical descriptions," said Carr. "They both said he was about 5'10" to 6', 170 to 180 pounds, in his mid-40s, with brown eyes. People on the ground who came into contact with him also gave very similar descriptions."

Carr has included some observations on the Web site that might help would-be detectives who accept the FBI's challenge.

Agents now believe Cooper was not an experienced skydiver because he made the jump in street clothes on a dark, rainy night; and he is believed to have acted alone because he did not coordinate with the flight crew to fly over a particular drop zone.

Over the years, several people have thought they knew Cooper's identity or have claimed to be the hijacker. FBI officials said they have considered more than 800 suspects and processed thousands of pieces of information.

They even arrested Richard Floyd McCoy for a similar airplane hijacking and escape five months after Cooper's flight, but McCoy was ruled out as a suspect in the Flight 305 hijacking because he didn't match the physical description.

The most recent suspect — Kenneth Christiansen — was revealed in an Oct. 22 article in New York magazine.

According to the article, Christiansen's brother, Lyle Christiansen of Morris, Minn., took his suspicions to the FBI and Sherlock Investigations, a private detective agency in New York.

Kenneth Christiansen, who died of cancer in 1994, was a former employee of Northwest airlines. He also lived in Bonney Lake, Wash., and had trained as a paratrooper in the U.S. Army.

The FBI said Christiansen didn't match the physical description, however.

Other claims have also been discounted based on physical descriptions, parachuting experience and DNA recovered from the thin, black tie that Cooper removed before he jumped.

The FBI is asking that anyone with information e-mail the Seattle field office at fbise@leo.gov.

Additional reporting by The Associated Press