Accessibility links
Candidates Rally Voters in Iowa Caucus Countdown Caucusing is not voting. It's not secret, and it can take hours. So persuading Iowans to support a candidate is just the beginning. The candidates go to great lengths to get their supporters to go to the Iowa caucuses.

Caucusing is not voting. It's not secret, and it can take hours. So persuading Iowans to support a candidate is just the beginning. The candidates go to great lengths to get their supporters to go to the Iowa caucuses.

As the caucuses approach, there is increased focus on the nuts and bolts of making sure people actually turn out. The weather could have an impact. It'll be cold. No surprise there.

Also worth noting is that a large percentage of people who tell pollsters they will be caucusing have never participated in the Iowa caucus before, so it's not clear how many of them will actually show up.

DON GONYEA: Presidential candidates have been working Iowa voters since last winter, but now with caucus day upon us, and with races on both Democratic and Republican sides very tight, it all comes down to getting committed supporters to live up to that commitment. Candidates are out making last-minute speeches, their job is to keep enthusiasm up among their backers. But even more critical at this late-stage is the work of campaign organizations.

Mr. GENTRY COLLINS (Iowa State Campaign Director for Mitt Romney): We're going to door-to-door to as many of them as we can get to, although in 15-degree weather that's hard to do. And we are making certain that they know where to go, making sure that they remember that the caucuses happen at a time certain, that you can't just go vote all day long, that you have to show up at seven o'clock and vote, and frankly, doing anything else that we can think of to turn our supporters out.

GONYEA: Collins says they're also attracting special cases, people who will need help getting to the caucus. He cited one woman with a broken hip who supports Romney, who will be just one of many people being chauffeured tomorrow night.

In downtown Des Moines at Mike Huckabee headquarters, they're doing the same things, though on a lower budget. Upstairs, about 50 volunteers, from senior citizens to high schoolers, are making thousands of last-minute phone calls.

PAUL(ph) (Volunteer): How are you doing? I'm Paul. I'm a volunteer for the Mike Huckabee campaign. I'm calling to remind you about the caucus tomorrow evening. Oh, great.

Mr. ERIC WOOLSON (Iowa Campaign Manager for Mike Huckabee): Two hours ago, we had a phone call, a gentleman said that he was sight impaired and was there something that we could do, and we said, you know, what's your precinct, what's your address, we'll get somebody there to get you to your precinct to caucus and back.

GONYEA: Huckabee has used enthusiasm among Iowa Republicans particularly evangelicals to build a small lead over Mitt Romney in the polls in the state over the past two weeks. Now, the Huckabee campaign is hoping that such enthusiasm can help offset the big money and organizational advantages that Mitt Romney has. The big final push is playing out in Republican and Democrat campaign offices across the state.

But phone banks and door-knocking are old-school techniques. The most organized campaigns, and those with the most money, are also extremely tech-savvy, reaching out to Iowans through text messages, through Internet networking sites such as Facebook, through e-mails. Babysitting services are being offered to families. Casseroles are even being dropped off, so busy moms can go caucus.

Campaigns are also mindful of the fact that because this is a caucus, there can be confusion even about where to go. Again, Gentry Collins of the Romney campaign.

Mr. COLLINS: Even for people who vote all the time, vote very regularly, their regular voting location and their precinct caucus location are two separate places. And so, just simple things like making certain that our supporters know where to go actually turn out to be quite important.

GONYEA: Also underway today are efforts by the statewide Republican and Democratic Party organizations here to make sure that caucuses simply come off without any problems, and they are braced for a potentially huge increase in turnout.

Carrie Giddins of the Iowa Democratic Party notes that in 2004, roughly 120,000 Democrats participated. This year?

GONYEA: Giddins says that's not a prediction, but simply something they have to be ready for, given the intense spotlight on Iowa tomorrow night.

The Countdown to Iowa: Last Bid to Boost Turnout 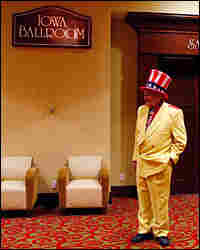 Oscar Poole waits outside of a news conference by Republican presidential hopeful and former Arkansas Gov. Mike Huckabee in the days leading up to the caucus. Justin Sullivan/Getty Images hide caption 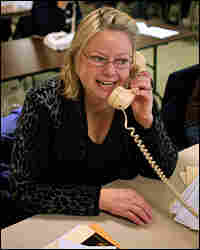 The moment has finally come when Iowans will begin choosing candidates for the 2008 presidential race, as they go to the state caucuses Thursday night.

Candidates have been frantically traversing Iowa and reaching out to residents through phone banks, door-to-door campaigning and political rallies. But the candidates have also turned to technology to help them get out the vote in chilly Iowa, sending text messages to potential caucus-goers, or urging them to participate through social networking sites such as Facebook and MySpace.

"Go to the caucus," he urged rally participants. "Stand up, speak out, change this country — show what you're made of, show what your courage is, show what your character is. Let's make America a country all of us are proud of, for our children, for our grandchildren."

Former Massachusetts Gov. Mitt Romney has run more than 8,000 television ads, but on Wednesday, the Republican asked for support from a crowd in the tiny Mason City Municipal Airport before taking off in a chartered plane bound for a stop in West Des Moines.

At the headquarters for Republican Mike Huckabee, former governor of Arkansas, about 50 volunteers from senior citizens to high school students made thousands of last-minute phone calls to remind Iowans that the caucus doors would open at 6:30 p.m. sharp.

Sen. Barack Obama (D-IL) directly addressed his younger supporters at a local high school, asking them to disprove cynics who say students do not vote.

Sen. John McCain (R-AZ), who largely ignored Iowa through the fall and early winter, had to push his way through an overflow crowd of supporters outside of his Des Moines campaign headquarters.

"I'm very grateful for you being here. I'm grateful for this expression of support. And I can tell you we've come a long way since I met the 1,203-pound pig named Big Red at the Iowa State Fair — and then enjoyed a pork chop on a stick, followed by a delicious deep fried Twinkie," McCain said.

With such a tight race, campaign workers say they're tracking caucus participants who may need special attention to help them get to the caucuses. The Romney campaign cited one woman with a broken hip who will receive a ride Thursday night to her precinct place.

For Iowans who say they're too busy to attend the caucus, campaigns are offering child care and even the shoveling of snow-covered driveways — anything to make it easier.