Accessibility links
Hotel Maids Challenge the Placebo Effect A study of hotel maids showed that they did not think they got much exercise — even with all the heavy lifting they do. But when they were told that their jobs qualified as workouts, the pounds started dropping. 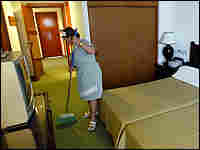 The holidays are finally over and your waistline is as overstretched as your credit card. It's time to take action! What should you do?

B) Make a solemn pledge to never ingest another sweet for as long as you live.

C) Hit the gym and make a solemn pledge to never ingest another sweet for as long as you live, or ...

D) Sit around on the couch eating chocolate bonbons while genuinely believing that you are getting a lot of rigorous exercise.

Langer is a researcher who has published several important and provocative studies. In this study, she decided to look at whether our perception of how much exercise we are getting has any effect on how our bodies actually look. To do this, she studied hotel maids.

As any casual observer of the hospitality industry knows, hotel maids spend the majority of their days lugging heavy equipment around endless hallways. Basically, almost every moment of their working lives is spent engaged in some kind of physical activity.

"Given that they are exercising all day long," Langer says, "that seemed to be bizarre."

What was even more bizarre, she says, was that, despite the fact all of the women in her study far exceeded the U.S. surgeon general's recommendation for daily exercise, the bodies of the women did not seem to benefit from their activity.

So Langer set about changing perceptions.

She divided 84 maids into two groups. With one group, researchers carefully went through each of the tasks they did each day, explaining how many calories those tasks burned. They were informed that the activity already met the surgeon general's definition of an active lifestyle.

The other group was given no information at all.

One month later, Langer and her team returned to take physical measurements of the women and were surprised by what they found. In the group that had been educated, there was a decrease in their systolic blood pressure, weight, and waist-to-hip ratio — and a 10 percent drop in blood pressure.

One possible explanation is that the process of learning about the amount of exercise they were already getting somehow changed the maids' behavior. But Langer says that her team surveyed both the women and their managers and found no indication that the maids had altered their routines in any way. She believes that the change can be explained only by the change in the women's mindset.

The implication is that the "objective reality" of the physical body is not as immovable as we might have assumed. Hence, the theoretical possibility that, if done with genuine conviction, one might be able to sit around eating chocolate and still lose weight.

But Martin Binks, director of behavioral health at the Duke Diet and Fitness Center in North Carolina, is skeptical of Langer's conclusion, even though he is impressed with the physical changes in the maids.

"There's a very high likelihood that [the maids] behaved differently after they received that information," he says, "and they were being more active and eating more healthfully. And that resulted in their improvements in health."

But Binks has a more substantive criticism. He does not believe that placebos are capable of producing the kind of objective change in the physical body that Langer is claiming.

"Generally what placebos work on is subjective types of findings," he says.

In other words, a placebo can help change something like your perception of pain or perhaps your sense of whether you feel depressed, but it can't do something objective like shrink a tumor or cut three pounds off your waistline.

Howard Brody has spent years looking at this issue. He says that a number of relatively new studies challenge the old assumption that the placebo effect alters only subjective perception. He is the director of the Institute for the Medical Humanities at the University of Texas Medical Branch and the author of the book, The Placebo Response.

For example, Brody notes one study where researchers gave asthmatic patients a drug that actually makes asthma worse. When they gave the drug to the patients, they told them that it relieves asthma.

"So the idea that the placebo effect applies only to subjective things is really one that we have to dismiss."

So maybe it really might be possible to sit on the couch eating chocolates and lose weight. I, for one, am certainly willing to sacrifice and give it the old college try.