Accessibility links
Revitalizing the Dried Bean For many, "dried beans" conjures up memories of school cafeterias and grayish-brown, lumpy dishes devoid of flavor and with the texture of library paste. An Egyptian cook's inventive use of dried legumes gave Kevin Weeks a newfound respect for them. 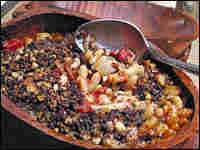 A classic cassoulet is made of white beans, and preserved and fresh meats. It's a perfect way to showcase dried legumes. Kevin Weeks for NPR hide caption 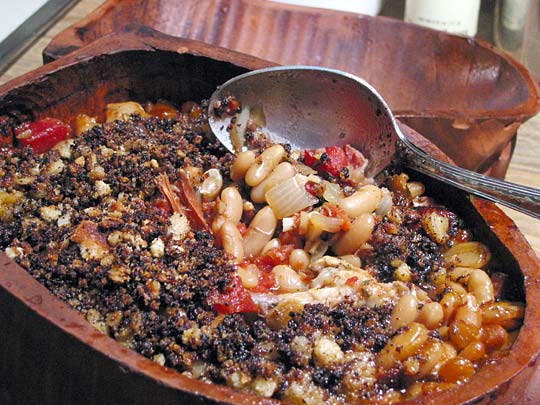 A classic cassoulet is made of white beans, and preserved and fresh meats. It's a perfect way to showcase dried legumes.

Get recipes for Cassoulet, Cannellini Mediterranee and Lentil Soup.

A lot of recipes call for soaking dried beans overnight before cooking them. The argument is that the soaking reduces the cooking time. Although true, it only reduces cooking time by about an hour. This doesn't make much difference when you still need to simmer them for another two or three hours. The other reason offered is that soaking reduces the effects on the digestive tract.

Beans cause flatulence because they contain complex sugars that the digestive system can't break down. Soaking, however, has little or no effect on these sugars. The other cause for flatulence is the high fiber content of beans. Again, soaking has no effect on the fiber.

So instead of soaking beans, I just simmer them for three or four hours. Don't boil the beans, as this will toughen them. Instead, bring the cooking liquid to a simmer and cook them gently.

I also strongly urge simmering them in some sort of stock. If you're going to rehydrate the beans, you might as well have them soaking up flavor at the same time. And that business about not salting the cooking liquid is garbage. Salt doesn't make the beans tough. So, as I do with pasta, I add plenty of salt to the liquid to get that saltiness inside.

There is some truth to the idea that adding acid early in the cooking process toughens beans. However, the amount of acid — in the form of vinegar or lemon juice — required is quite high, probably higher than you'd enjoy eating. The milder acid levels in tomatoes or wine won't significantly toughen the beans.

A more common cause of tough beans is the water used. If it's high in calcium or magnesium it will slow the softening process. You might want to try making your bean stock with distilled water if your tap water is particularly hard.

Mah'moud was a big man — about 6 feet 3 inches and 250 pounds — so people noticed when he walked down the street leading a turkey by a string around its neck. He was on his way to the backyard of our house in a suburb of Cairo, Egypt, where I lived the year I turned 18 and where he worked as our cook.

An excellent French-trained chef, Mah'moud would slaughter and dress the turkey before roasting it for dinner. While the bird was delicious, it was what he did with the leftovers that I loved best. He made stock from the carcass and lentil soup from the stock. In the process, he made me a believer in dried beans.

Despite being born and raised in the South, where dried legumes are a staple, I'd never been a fan. They were often served as the main dish at the school cafeteria and were a grayish-brown, lumpy mixture, devoid of both color and flavor and with the texture of library paste.

Even my mother's Senate bean soup, red beans and rice, and the black-eyed peas Southerners eat on New Year's Day for good luck could not diminish my distaste for dried and reconstituted legumes. It took an Egyptian cook to do that.

Mah'moud cooked the beans in a stock, and in retrospect I suppose he simmered them long, low and slow. Plus it turns out turkey and lentils have a natural affinity, at least according to my taste buds, so a turkey stock was the perfect base flavoring.

Mah'moud also introduced me to hummus bi tahini using dried chickpeas he soaked all night and to which he added hand-ground sesame paste — a dish I quickly came to adore and years later to master. In fact, this Egyptian figured out how to make a great pot of chili when we ran out of the packaged chili mix we'd brought from the United States. And he did it with dried beans.

The summer after I left Egypt, I hitchhiked through Europe where I discovered cassoulet, an extraordinary peasant dish from the Languedoc region of France. I was being treated to lunch by my ride at the time, American journalists who insisted I have cassoulet.

Once again, I was taken by the dried beans. Cassoulet is built around small white beans cooked just past al dente: They're silky smooth but retain a noticeable bite. The beans are mixed with chunks of sausage, duck and pork, and herbs such as rosemary and thyme.

Like so many peasant dishes, this one has been "discovered" and elevated to fancy bistro fare. In the process, it has evolved from a simple bean soup or stew using whatever is in the larder to a much more complex, multi-day affair sometimes requiring hard-to-find ingredients such as saucisson de Toulouse or rabbit.

The classic cassoulet is made of white beans, and preserved and fresh meats. It includes duck or goose confit (duck or goose slowly poached in fat, which preserves the meat so it can be kept for a time without refrigeration), sausage (another way of preserving meat) and fresh meat, most commonly pork or mutton.

Like most bean dishes, cassoulet tastes better on its second day, after the flavors have time to meld.

After all this, I might still not describe myself as a bean-lover. Since that year in Egypt, however, I've continued to experiment with beans. I've learned that the key to good beans is adding bold, assertive flavors; gentle long cooking to produce a tender result; and a good dose of fat to improve the mouth-feel. Dried beans are a great source of protein and fiber and they're dirt cheap. I am indebted to Mah'moud. 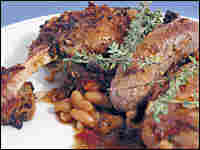 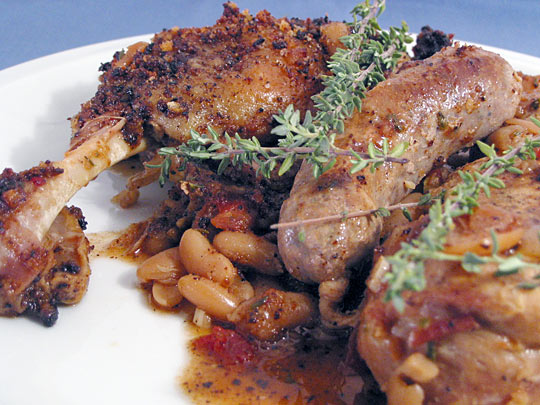 As with all such peasant dishes, there are as many recipes as there are cooks. This recipe is very much in the traditional mode. I did make duck confit (a three-day affair) specifically for the cassoulet, but I also wanted some to make duck rillettes for Christmas dinner, so I would have made the confit anyway. With the exception of the ribs, I already had all the ingredients on hand. The bottom of the clay casserole that's traditionally used is often lined with pork rind, but I elected to add some chunks of pancetta to the bean cooking liquid because I had it.

1 celery stalk, broken in half

1 carrot, unpeeled, broken in half

2 large yellow onions, 1 peeled and cut in half, the other peeled and diced

2 duck legs confit (about 12 ounces with bone in), you can use fresh duck or chicken if confit isn't available

Pick over beans and add to a large pot along with carrot, celery, the onion cut in half, pancetta, thyme and bay leaves. Add stock and bring just to a boil over high heat, then reduce heat and simmer for 3 hours. Top up liquid with water as needed to keep all ingredients covered.

Cool beans then pick out vegetables and herbs and discard. Remove pancetta, dice roughly and return to pot.

Season pork ribs with salt and pepper and brown on all sides in a tablespoon of duck fat in a cast-iron skillet. Cover skillet with aluminum foil, place in oven and cook until the beans are done — about 3 hours. Allow to cool.

Place sausages and 2 tablespoons of duck fat in a skillet with 1/2 inch of water. Simmer for 4 minutes, turn sausage over, and simmer until all water is gone. Brown sausages and set aside.

Add another tablespoon of duck fat (if needed) to sausage skillet and add diced onions. Saute over medium heat for 4 minutes, stirring as needed to prevent burning. Stir in 3 tablespoons minced garlic and cook 1 minute longer. Mix onions into beans along with diced tomatoes and their juice.

Add last tablespoon of duck fat to skillet and toss in breadcrumbs and remaining tablespoon of minced garlic. Cook until lightly browned. Reserve.

If you're using fresh duck or chicken, season it generously with salt and pepper and brown it in the skillet with a tablespoon of oil or fat.

Combine all the ingredients except breadcrumbs in a deep casserole or Dutch oven, but make sure beans cover all the meat to keep it from drying out. You may need to add a bit of liquid, just enough to bring the level slightly below the top. Water works, but so does either red or white wine, and wine adds more flavor. Sprinkle with breadcrumbs to form a crust.

Bake, uncovered, for 1 hour. Remove from oven, cool and refrigerate overnight. If you want to eat it the same day, cook it an hour longer, but it's much better on the second day.

The next day, preheat oven to 300 degrees.

Remove meat from bones and slice sausage into rounds then stir back in along with the crust. Cook for 1 hour and serve.

I like a red wine with this dish, but white is fine. A green salad with vinaigrette is the perfect side dish. 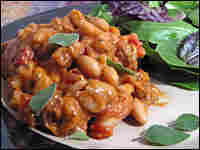 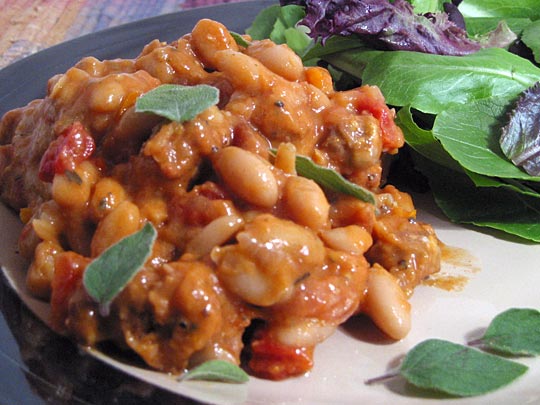 This dish was inspired by cassoulet, but it lacks the complex flavors of the traditional dish. It also lacks the complex preparation. However, it's absolutely delicious and, because I used canned instead of dried beans, it's relatively quick to make.

Add all remaining ingredients to the pot along with just enough chicken broth to bring the liquid level with the other ingredients.

Cover the pot and place it in the oven for 1 1/2 hours. Remove the cover and continue cooking for another hour until a few beans begin to split and release some starch into the broth for thickening. 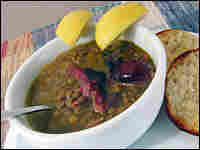 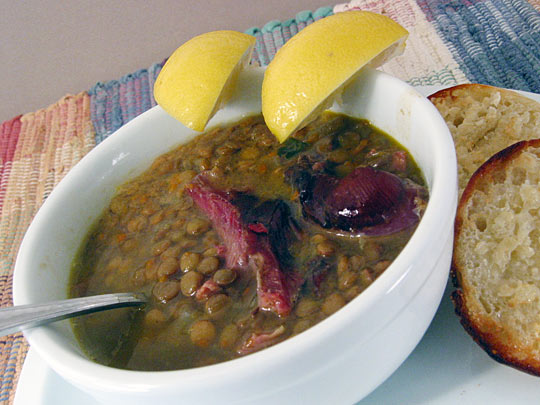 This is my re-creation of Mah'moud's lentil soup. The most distinctive element of this recipe is the lemongrass (which is my addition) and the lemon wedges, which Mah'moud always served. I use smoked turkey legs from my supermarket's meat department to make the stock.

Break the turkey carcass (or turkey leg or ham hock) into pieces and place in a stock pot and the remaining stock ingredients. Add enough water to cover completely, place over high heat and bring almost to a boil, but don't boil. Reduce heat to medium and simmer for 2 hours, skimming off any scum that forms. Add additional water as needed to keep ingredients covered.

Remove carcass from pot. Pick off any meat, and chop finely. Strain broth into another pot or container and discard solids (except for any meat that may have fallen off, which should be chopped).

Bring just barely to a boil over high heat, then reduce heat to medium-low, cover and cook for 2 hours, stirring occasionally and adding additional stock or water to keep the lentils under 1/2 inch of liquid. Remove from heat and stir in any chopped meat and heat through. Season to taste with salt and pepper. Serve with lemon wedges.