Accessibility links
Muslim Women Behind Wall of Silence in Germany Tens of thousands of uneducated Muslim women are physically living in Germany but leading lives of isolation and violence in their homes. Many seek solace in religion. By reaching out to these women, Germany hopes to facilitate the integration of a larger Muslim community.

Listen
Muslim Women Behind Wall of Silence in Germany

First in a six-part series. 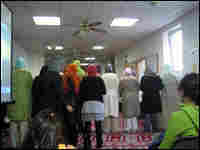 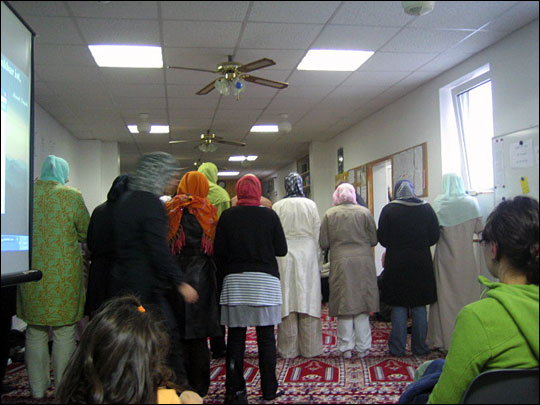 Read Sylvia Poggioli's thoughts on reporting on Muslims in Europe over the past decade. 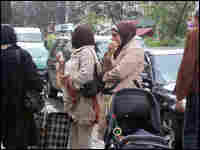 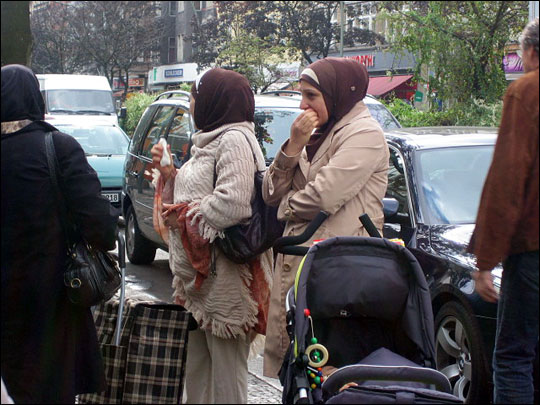 Women in Neukölln district of Berlin. Authorities are now focusing on Muslim women, hoping that they can facilitate Muslim integration into mainstream society. 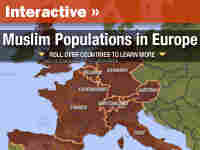 View the locations of Muslim populations across Europe.

Europeans are starting to question the notion of multiculturalism, which can lead to separate, parallel societies and a large Muslim underclass.

Officials are now focusing on Muslim women, believing their empowerment can facilitate their communities' integration into mainstream society.

In Germany, many Muslim families are guided by the strict patriarchal traditions of rural Turkey. The men say those customs are necessary to protect their women from what they see as the evils of Western secular societies.

But many of those Muslim women live behind invisible walls of silence.

Tensions in a Multi-Ethnic Society

"Turkish for Beginners" is a popular TV sitcom in Germany. A German psychotherapist who is a single mother of two teenagers falls in love with a policeman of Turkish descent. He also has a teenage son and daughter. They all move in together and form a patchwork family.

In one scene, the veiled Turkish daughter tells her new blonde stepbrother that she wants her own plates, ones that haven't been tainted by his German pork.

The sitcom — written by a Turkish German — pokes fun at the cross-cultural family, but also raises more serious issues in a multi-ethnic society. It deals with religion and relations between men and women.

One of the biggest problems in these multi-ethnic societies is the wall of silence behind which tens of thousands of uneducated Muslim women live. Many of them first met their husbands on their wedding day, only to disappear into a world ruled by rural Turkish traditions — unnoticed by their German neighbors.

Seyran Ates is a lawyer and women's rights activist who says that many Muslim women in Germany lead lives of isolation and often experience physical violence.

"They are under the control of the man or their families," she explains. "This is women who are physically living in Germany, but psychologically living in another culture, which is looking for gender apartheid."

Polls show that only one-third of Muslims in Germany want to integrate. And German authorities worry about the rise in the number of uneducated, imported brides and grooms from Turkey, who arrive through both arranged and forced marriages. The interior ministry says that nearly half a million spouses have been imported since the 1980s. Tens of thousands continue to arrive every year.

These families — where children don't hear German spoken and where the values of rural Anatolia prevail — are increasingly seen by authorities as an obstacle to integration. With every new imported bride, the parallel society grows, and it's as if each generation is a first generation.

Alarmed by the growing divide, the Berlin city council has turned to people like Nailya Alieva, an Azerbaijani who speaks numerous languages. In her modest apartment, she counsels Muslim women with problems. Her official title is district mother.

It's very difficult for women, Alieva says, to go out from their closed world into an alien German society where they have to put on a smiling face and act self-confident.

Shishek is one of the women Alieva counsels. She grew up in Germany and speaks German well, but she was dragged back into the world of rural Turkey, she says, when her parents forced her to marry a much older man from their home village. Once he arrived in Germany, he began having girlfriends and beating her.

Shishek is adamant that her daughter will not follow in her footsteps.

"I want her to finish whatever studies she wants," Shishek says. "I will not allow her to drop out of school as I did, or to be married off the way I was."

Many Turkish women have similar experiences.

In 2004, the German ministry for family affairs claimed that 49 percent of Turkish women had experienced physical or sexual violence in their marriage. And in the last decade, there have been 49 known cases of honor killings, 16 in Berlin alone.

Some women — those daring enough to break the family code of silence — flee domestic violence and seek help in the few existing shelters.

Social worker Gockcen Demiragli, who is German-born and of Turkish descent, says that every month, 300 to 400 women come for assistance to her center alone. But most, she says, remain hidden in their homes, fearful of an outside world they don't understand.

For them, Demiragli says, Islamic preachers are filling the void.

"The Muslim institutions, they see these problems, that families are having problems," she explains. "They say, 'If you become again religious or get back to your roots and your religious beliefs, then everything will become better.' And that's why we have this movement, religious institutions are becoming bigger and stronger."

On Friday evening, veiled women gather in their section of the Bilal prayer hall. It also serves as therapy, a place where women can find their equals and be reassured in their identities.

They barely speak German and, like 40-year-old Zinna Abbas, they say they feel comfortable only in the mosque.

"In the streets, especially elderly people, they, Germans, call me foreigner and they kind of ... they look at me in a certain way, so I notice they don't like me because of the way I look," Abbas says.

Muslim conservatives are closing ranks, fearful the patriarchal family might be undermined if their women yield to the seduction of Western society. Schools are increasingly granting Muslim parents' demands that their daughters not take part in sports, sex education and field trips.

Iranian-born Mina Ahadi heads the council of ex-Muslims — a group founded in February that has since spread to other European countries. She has received death threats and is under police protection. She believes Germany has allowed the construction of too many big mosques.

"We want to show to the people that people from the Islamic countries do not have religion as their main identity," she says. "What we want to achieve is that politics acknowledges that there is no alternative to human rights, to women rights, and this is what we are fighting for."

In March, a Frankfurt judge rejected a Muslim woman's request for a fast-track divorce. The woman said her husband beat her, but the judge ruled that the Koran sanctions such physical abuse.

Ahadi says this is an example of German condescension.

Under the guise of religious tolerance, she says, German institutions turn a blind eye to women's rights violations.

Her group's main goal is to fight against both political Islam and German policies that strike compromises with Islamic institutions at the expense of women's rights.