Accessibility links
The Challenge of Eating Local: Distribution Many consumers want to eat locally grown produce. Many small farmers want to oblige but have difficulty getting the food shipped to a local market. The business is dominated by big distributors. In northern Michigan, one entrepreneur is trying to solve the problem. 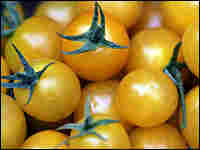 Consumers are increasingly asking for locally grown produce, but distribution can be a problem. A Michigan man has begun a business that distributes produce from local farms to area restaurants, homes and stores. David Silverman/Getty hide caption

More and more consumers are demanding produce grown near their homes, and small farmers are happy to oblige.

The problem is how to get locally grown fruits and vegetables into local kitchens.

Produce distribution in the U.S. is still dominated by big companies that buy and sell in huge volumes, trucking goods across state and international lines. But in a corner of northern Michigan, one entrepreneur is using his experience as a chef and wholesaler to solve one problem facing small farmers.

Eric Hahn grew up in Charlevoix, Mich., at the northern end of a cherry-growing region that produces at least 100 million pounds of cherries a year.

Hahn was the sales representative for a national food distributor out of Detroit. The sweet cherries he trucked to nearby stores were brought from Washington state because the cherries ripen earlier there, and the growing season is longer.

But the stores and restaurants Hahn supplied were constantly asking for local cherries.

"I had grocery stores, some of my chefs were interested in them, and one of them one day said, 'Run down to Friskes and bring me back a box of cherries. I don't have time to do it,'" Hahn recalled. "So I did and sent him an invoice. That was the start of it all."

At one point, Hahn convinced his company to work with some small growers on a pilot distribution project, but the fruit and vegetables still had to go through the warehouse in Detroit. There were also some other logistical problems, so the company stopped the program.

"The farmers I was working with were people I'd known for a long time going back to grade school, and I knew they grew great peaches, great strawberries," Hahn said.

So, Hahn quit his job, took $5,000 out of his savings account, traded in his Volvo for a van and started Cherry Capital Foods.

Now, he distributes food grown on about 60 local farms to more than 100 nearby restaurants, resorts, stores and schools.

As Hahn dropped off a load of potatoes at the Grand Traverse Resort and Spa, executive chef Ted Cizma said it used to be a chore for him to get a bag of locally grown potatoes.

"I bought from a lot of the people that he brings from, but it would require a phone call to each of those purveyors. It required really being creative to get it (the produce) here because most of the smaller producers aren't set up to deliver," Cizma said. "I was actually having to send somebody out to the different areas to pick stuff up. And, quite frankly, we weren't getting the variety or consistency that we have now."

There is some debate about the environmental benefits of buying food locally, but Cizma said it's just the right thing to do. He said there's no reason for him to buy food from California or China when he has a local alternative.

"Let's think about Michigan's economy for a minute. We need it here more than they need it there," he said.

Hahn said he spent nearly every day this summer in his van, and his revenues have grown to $250,000.

The profit margins in this business are slim, though, especially since Hahn often competes with produce grown in countries with cheap and abundant labor.

Farmer Dick Zenner said it's a win-win situation for him. At Cherry Capital Food's warehouse, Zenner dropped off the last of his hothouse tomatoes for the year.

Hahn will deliver Zenner's tomatoes to a delicatessen later this morning, marking the travel time from the vine to the shelf in hours, not days.

Zenner sold half of his tomato crop through Cherry Capital Foods.

"That saved me driving around," Zenner said. "And with the gas prices the way they are, that's money in my pocket."

Zenner said he'll be putting in some more greenhouses for lettuce, and Hahn said he'll contract to buy every head of lettuce Zenner can grow.

Hahn said he expects sales will top $1 million next year, once more farmers like Zenner see the markets that are opening up.