Accessibility links
Issa Reinvents More Than Music Sales The Canadian singer-songwriter's "self-determined pricing" strategy for selling her songs predates Radiohead's. But it's only one of the ways that Issa, once known as Jane Siberry, is adapting to the Internet era in music.

Mimi on the Beach

The response from people is so positive that it confirms that it's the right way to go ... People say, 'I can't believe you trust us,' or 'Thank you for not making us feel like the minute you take off the brakes we're going to shoplift everything.' 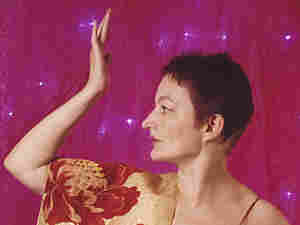 Radiohead made headlines recently by making its latest record available to download for whatever fans wanted to pay — or even for free. But it's not the first to have done so.

The Canadian musician Jane Siberry started using what she calls "self-determined pricing" for her songs back in 2005. And that's just the beginning of how the artist, who now goes by the name Issa, is reinventing her life in music.

Siberry's music has drawn an avid following since the early '80s. As a singer-songwriter, she's often compared with such free spirits as Joni Mitchell, Kate Bush and Laura Nyro.

Today, Siberry could easily be trading on her musical past, but she's chosen to leave it behind. In 2006, she emptied and sold her house in Toronto, even shredding her old letters and photographs. And she renamed herself Issa.

On a recent U.S. tour, Issa sang almost no Jane Siberry songs. Backed only by a keyboard player, she came across as a strange and mesmerizing combination of jazz singer, poet and performance artist — the furthest thing from a pop artist touring to promote her latest album.

She carries around a small backpack that contains most of her belongings.

"My clothes, I didn't want to look like I was a backpacker and wearing mountain co-op stuff, so I wear really elegant expensive boots and shoes, but only one pair and one beautiful suit," Issa says. "It's a different way of doing things."

The rebirth of Jane Siberry as Issa, as she tells it, is not just about clearing away the glut and clutter of modern life. It's also about reinventing the way musicians sustain themselves in the Internet era.

In the mid-'90s, well before the record business began its precipitous decline, Siberry left Warner Bros. to start her own label. Two years ago, she stopped selling CDs. She started allowing fans to download her music and pay whatever they wanted — including nothing.

"The response from people is so positive that it confirms that it's the right way to go, and I'll sink or swim by it," Issa says. "People say, 'I can't believe you trust us,' or 'Thank you for not making us feel like the minute you take off the brakes we're going to shoplift everything.'"

Issa's Web site gives statistics on what it costs to produce her music, and how much fans are paying for it. The average payment is around $1.25 a track, considerably more than the iTunes Store's 99 cents.

"I didn't do it as a business model, although I have a feeling that it will help me do what I want to do," Issa says. "But if you see it as a way to further manipulate people into emptying their pockets, I think it'll get a balancing reaction."

Issa still doesn't make much money from downloads: Touring and licensing, she says, are her bread and butter. But to Issa, the point of self-determined pricing is to circulate her music more widely and to create a direct way for fans to support her.

In fact, Issa's fans can now support her even more directly: by subsidizing a day in the studio. So far, patrons have given more than $10,000 for the recording of 33 new songs — essentially advancing her the money the way labels used to do.

"She has a genuinely warm relationship with her fans," Issa patron Tom Neff says. "They love her, we love her, and that's one of the big reasons this works."

"When she says, 'Hey, I'm going to try this new thing,' we trust her," Neff says. "We know she's not doing a number on us, and we know that the experiment is going to be worth a shot."

These days, Issa is taking the self-determined pricing idea even further. She's making the prototype of her Web store available for other musicians to use — for, of course, whatever they want to pay. She also plans to introduce something called creative currency: In exchange for a download, you can choose to do a good deed. And her site will automatically post your choice for others to ponder.

"We are returning to more of the original vibration of music and creativity through the removal of this distortion called the music industry," Issa says. "That's where we're heading, and it'll cut out a lot of music if people ever expected to make money, and people will even cut down on the songs they put out. Maybe put three songs out in your whole life — no rush to do it."

So Siberry/Issa has truly put herself out on a limb: building a radically new kind of music career, under a new name, with no label or manager or publicity machine — all while roaming around with little more than a backpack, laptop and cell phone. Issa calls this reverting to a troubadour state. She acknowledges that it may not prove sustainable.

"I'm just opening the doors, and a lot of this is new to me — thinking about it and letting go again and again and again, trusting that if I'm meant to continue working as a musician, it'll happen. If I'm not, then pull out the life support."