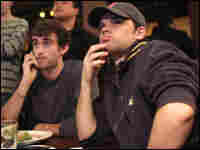 Illinois Sen. Barack Obama was propelled to victory in the Democratic caucuses in Iowa Thursday night in large part because of the support of young people and first-time caucuses-goers. Among Democratic caucus participants under 30, Obama took 57 percent of the vote.

"That's a landslide margin," says Jehmu Greene, a political consultant and former president of Rock the Vote, an organization that aims to mobilize young people. "It is clear that his message of change and hope connected with this generation of new voters."

Young voters made up about a fifth of the 239,000 caucus participants, about twice as many as typically take part, according to party officials. While people under 30 made up 23 percent of the Democratic caucus, they were just 12 percent of the Republican caucus, however.

From the beginning, reaching out to young people has been an integral part of the Obama grass-roots approach.

"The Clintons have a strong operation with traditional voters. The Obama campaign knew they were going to have to find new voters, and the best way to find new voters is to reach out to young people, because they are the group that votes in the smallest numbers," says Greene.

In the 2004 presidential election, just 47 percent of 18-to 24 year-old citizens voted, compared to 66 percent of citizens 25 and older, according to The Center for Information and Research on Civic Learning and Engagement. This was still an 11 percent jump from four years earlier.

Obama targeted young people not only through phone lines, e-mail and social networking sites — such as Facebook — but also face-to-face in an unprecedented way.

"Usually there's very limited resources put into engaging young people, but the Obama campaign actually put a lot of resources into identifying these young people and they stuck with them, knocked on their doors and actually turned them out," Greene says. "I think the key point with the Obama campaign is that they didn't stop with the Internet and cell phone outreach; they took this to the street."

The Obama campaign has 175 student chapters in Iowa.

"Each one was turning out five to 20 young people to the caucuses," Greene says. "That is just unprecedented in presidential campaigns."