Accessibility links
For Iraqi Refugees, Art May Be Avenue to New Life The Iraqi refugee community in Damascus, Syria, is a haven for young artists: filmmakers, painters, dancers. For dancer Muhanad Rasheed, talent is one way out: An invitation to Europe is an opportunity to perform and, hopefully, find a new life.

Listen
For Iraqi Refugees, Art May Be Avenue to New Life 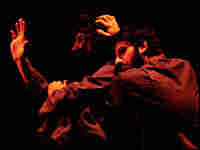 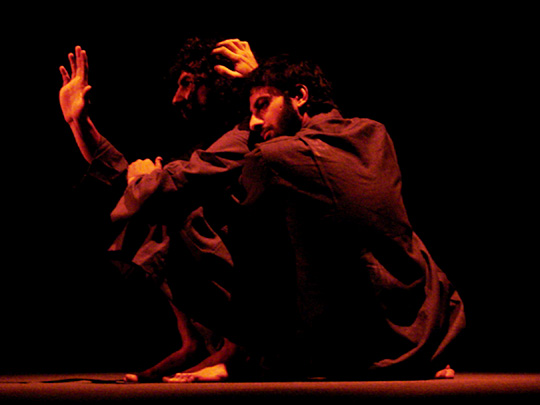 Iraqi dancer and choreographer Muhanad Rasheed (left) and Duraid Abbas perform "Crying of My Mother" — a work by Rasheed — in Damascus, Syria. 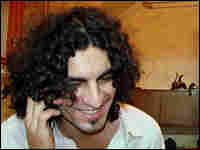 Rasheed says goodbye to his family before leaving Damascus to perform at a dance festival in Holland. Nezar Hussein for NPR hide caption 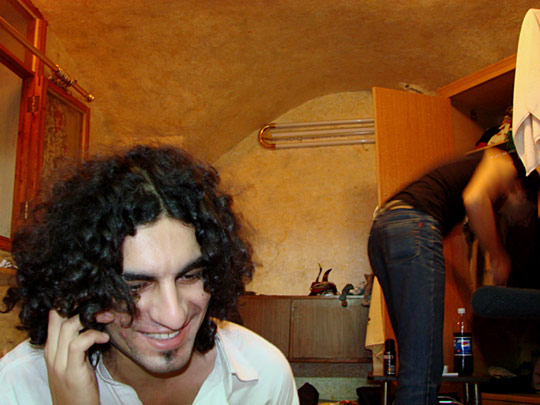 Rasheed says goodbye to his family before leaving Damascus to perform at a dance festival in Holland.

Many of the more than 2 million Iraqi refugees now in Jordan and Syria are hoping to build new lives elsewhere. For young artists forced to flee Iraq, talent is one way out. Invitations from Europe are the prize: an opportunity to perform and, hopefully, find a new life.

The Iraqi refugee community in Damascus, Syria, is a haven for young artists: filmmakers, painters, dancers. They say the country they left behind has no place for them, not now anyway. Like most refugees, they have time on their hands, which they spend developing their talents.

Muhanad Rasheed, 23, joined a contemporary dance company in Baghdad in 2003. But when the company fled the country, he quickly founded his own group in Damascus. Called Iraqi Bodies, the dance group combines Western, Japanese and Iraqi folklore dance styles.

He says all the hours of rehearsals and all the hard work have finally paid off: The group has received an invitation to perform in Holland.

"You should do something good because you are from Iraq. ... You [should] go there and tell the world that there [are] artists in Iraq [and that] not all the Iraqis carry guns in the street."

Rasheed is evasive when asked if he will return to Damascus after the festival. European visas are highly prized by the refugee community because an invitation to one capital opens the door to all of the European Union and a host of asylum opportunities. He knows to announce an intention to stay for good could jeopardize the invitation.

And before he departs, he is focused on a dance performance in Damascus — perhaps his last in the Arab world for a while — where he debuts his dance, "Crying of My Mother."

The theater is in an old stone building — cold and damp. There is a good turnout — Syrians and some Iraqis. The performance is both beautiful and violent: Two brothers who love each other turn on each other and die in each other's arms.

It is everything Rasheed wants to say about his country. It's a message, he believes, that is too dangerous to deliver inside Iraq.

The Iraqi people are the main problem, he says.

"We have a lot of problems in our culture. And that's why they killed each other. I understand there is an American military and a lot of bad hands from outside Iraq, but I think it is in our hands. We can fix the problem or we can make the problem a huge problem."

The performance is a hit with the audience, including two Iraqis, Yaser and Miriam Rahim.

Miriam Rahim says she loves the dance, which she describes as "very, very beautiful." And Yaser Rahim says he thinks it is "brilliant."

A few days after the performance, Rasheed and his brother are packing their few belongings in their one-bedroom basement apartment in Damascus. By cell phone, Rasheed says goodbye to family who are also refugees in Syria.

Rasheed says he will try to find his future in Holland.

"If I succeed I will stay there, and if I will not, who knows? Maybe I will come back to Iraq."

Rasheed did dance at the Dutch festival in mid-December — then was accepted for asylum when he applied a week later. His success has been telegraphed throughout the Iraqi arts community in Damascus, where young dancers, filmmakers and composers are working harder than ever.