Accessibility links
Democratic Candidates Cross Paths at Dinner With only three days before the New Hampshire primary, presidential candidates are rushing around the state so fast it can be hard to catch them. But Friday night, almost all of the Democratic contenders managed to be in the same hall in Milford. 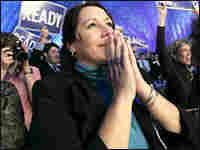 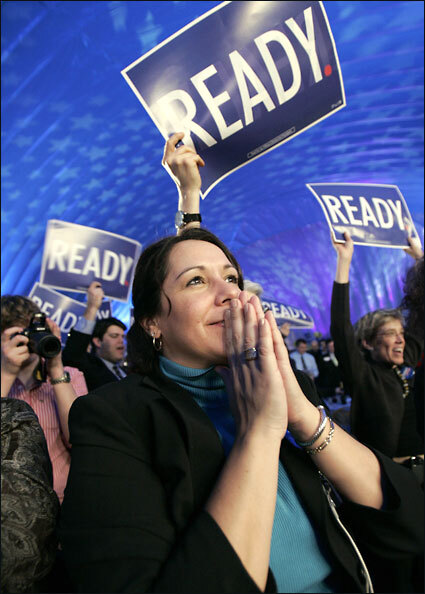 A supporter of Democratic presidential hopeful Hillary Clinton at the New Hampshire Democratic Party 100 Club Dinner in Milford on Friday.

With only three days before the New Hampshire primary, presidential candidates are rushing around the state so fast it can be hard to catch them.

On Friday night, however, almost all of the Democratic contenders managed to be in the same hall in Milford. They gathered for the annual 100 Club Dinner. Flush from the Iowa Caucuses, the atmosphere was charged. 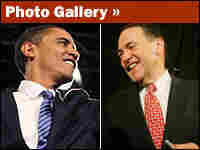 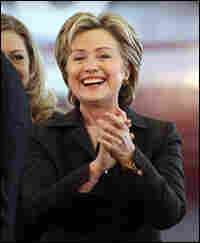 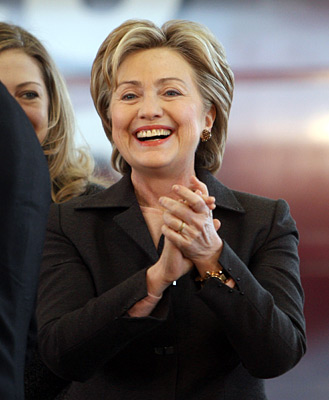 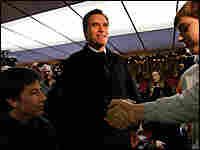 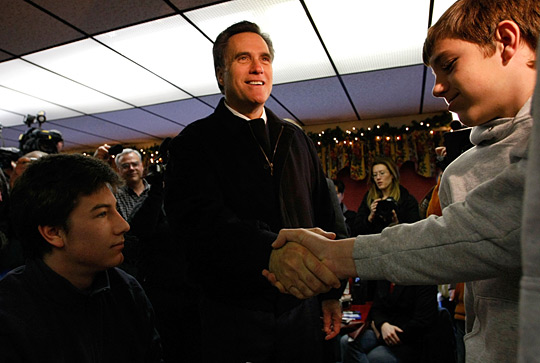 Both the Republican and Democratic candidates are now blanketing the Granite State in anticipation of Saturday's back-to-back debates, with only five days left until the primary. Even Huckabee's previously impoverished campaign chartered a plane from Iowa to New Hampshire, after months of flying coach between campaign stops. GOP candidate and former Massachusetts Gov. Mitt Romney touched down in New Hampshire at 3:30 a.m. Friday, while Clinton arrived with her daughter and husband in tow.

The candidates will face different challenges in New Hampshire. Granite State residents pride themselves on their independence. One indication came in 2000, when independent voters were largely responsible for McCain's victory in the Republican primary, when he beat then-Gov. George W. Bush, 48 percent to 30 percent.

New Hampshire also has a smaller base of evangelical voters than does Iowa, where they accounted for at least 60 percent of Huckabee's supporters.

On the Democratic side, the latest polls show Obama within striking distance of Clinton, trailing her by six percentage points. But the Clintons have a special bond with New Hampshire voters: Then-Gov. Bill Clinton spent months campaigning there in 1992, finishing a close second to Paul Tsongas and proclaiming himself "the Comeback Kid."

Clinton reminded New Hampshire voters of her husband's legacy at a campaign stop Friday morning, saying, "We have learned before it has taken a Clinton to clean up after a Bush."

For the Republicans, New Hampshire polls indicate a close race between McCain and Romney. Like McCain, Romney is a familiar face there, having previously served as governor of neighboring Massachusetts. All this could slow Huckabee's momentum after the Iowa caucuses, especially since his campaign has not been as well funded as those of the other front-runners.

Huckabee has been running third or fourth in New Hampshire polls, but the national chairman of Huckabee's campaign, Chip Saltzman, says Huckabee will try to appeal to fiscal conservatives by touting his economic record as the former governor of Arkansas.

Former North Carolina Sen. John Edwards, who put a tremendous amount of time and effort into Iowa, finished second among Democrats there. With far less money than his two more celebrated rivals, Edwards faces much stiffer odds in New Hampshire. He told NPR Friday morning that he still sees himself as a contender in the race.

"I still finished a strong second to the Clinton political machine," he said. "It proves that people care what you stand for, as opposed to how much money you raise."

Two other Democratic senators from the East Coast fared so poorly in Iowa that they dropped out — Chris Dodd of Connecticut and Joe Biden of Delaware. Gov. Bill Richardson of New Mexico didn't finish much better than they did, but has vowed to continue his campaign.

Democrats have a similar mixed record, though lately — in 2000 and 2004 — the Iowa winners went on to win in New Hampshire as well.

From NPR staff reports and the Associated Press