Accessibility links
From Togas to Yoga: Fraternities Try to Alter Image Some fraternities are using programs that promote civility, scholarship and virtue in an effort to get past the Animal House stereotypes. At Georgetown, Sigma Phi Epsilon has gotten rid of pledging as part of its "Balanced Man" program.

Listen
From Togas to Yoga: Fraternities Try to Alter Image 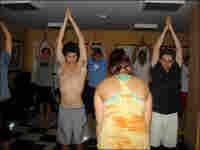 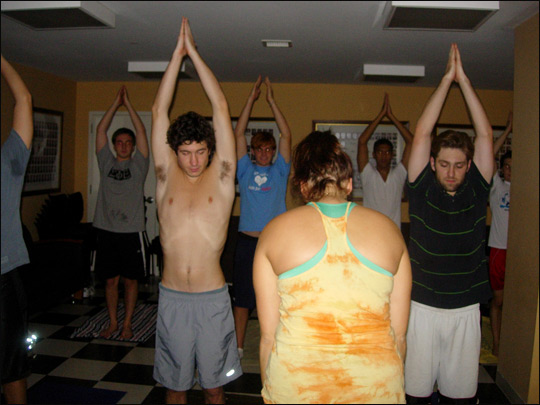 The brothers of Sigma Phi Epsilon at George Washington University learn to stretch and breathe in yoga class. 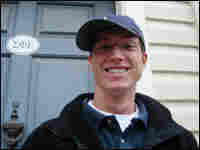 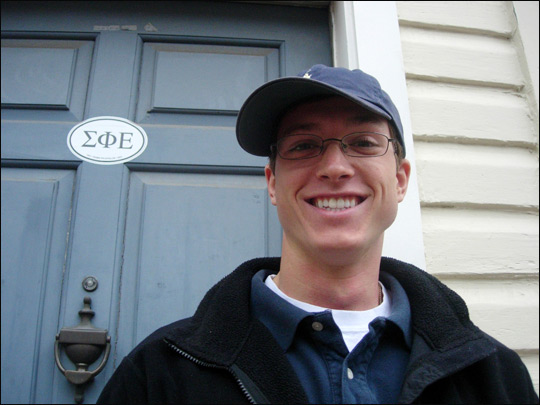 The movie Animal House has defined the college fraternity stereotype for decades — binge drinking, hazing, partying — but some fraternities are now trying to change that "frat boy" culture.

When asked about his fraternity's latest, wildest, hottest party, freshman and new Sigma Phi Epsilon recruit Lin Chen at Georgetown University in Washington, D.C., brings up pumpkins. Not togas or beer bongs, but pumpkins. And not pumpkin smashing, either.

"[We] laid down some tarps and just started carving. Music, hot cider, [got] the real family feel together," he says.

Fraternity President Paul Happel says he and his brothers aren't about random drunken hookups, either. They are trying to do something different.

"There's sort of this thing at Georgetown, this sort of unspoken rule that you don't exactly take girls out on dates," he says. "And it's interesting that SigEp really takes great pains to improve the culture of dating at the school, and they do that through having different sorts of events off of campus." Events like ice skating, formals or going to the opera.

Sigma Phi Epsilon has taken on a new agenda, and it goes by the name of Balanced Man. The principles: leader, scholar, athlete and gentleman. There's a lot of talk about being gentlemen.

They have thrown out the defining first step of fraternity membership: pledging. That means freshmen like Chen don't have to scrape out the pumpkin seeds — or do unspeakable things with them. Chen says that if there were hazing and endless keggers, he never would have joined.

"I came to Georgetown. I'm paying $50,000 a year. I kind of want to accomplish something outside of, you know, having a good story to tell my grandkids about what not to do in college," he says.

Sigma Phi Epsilon isn't the only one trying the "classy frat guy" style. According to the North American Interfraternity Conference, half of its 350,000 undergraduates are in these "re-imagining the frat"-type programs. With names like Men of Principle and the True Brother Initiative, the programs prop up civility, scholarship and virtue.

But these programs weren't exactly born out of some lofty ideal.

Matt Ontell, director of member development for Sigma Phi Epsilon, remembers the rowdiness of the '80, the '90s and a lot of the 2000s.

"We had a lot of risk-management issues," he says. That's fraternity code for lawsuits after drunken kids throw themselves off buildings. "From hazing to alcohol abuse and declining academics in grades."

Basically, frat-boy culture spawned so many disasters on college campuses that chapters kept getting shut down. Now, people like Mike Hayes, director of fraternities at the University of Maryland, are hesitantly allowing some chapters to reopen — as long as they are "balanced men."

Hayes says universities have been pushing fraternities to focus on honor and scholarship for years now. But finally, the fraternities' headquarters are on board.

As for the kids who want to be animals, who aren't into wine tastings and group study sessions, Hayes says, "I don't think they're going to have a choice. I think the headquarters and the universities are now in sync, and so the undergraduates won't have a choice. I think it's one of the first times in my 20 years where I've seen something that I believe will stick."

Over at George Washington University's Sigma Phi Epsilon chapter, the brothers are on the basement floor, concentrating on their breathing. That's right: The frat boys are doing yoga. They are sweaty, red-faced, earnest and incredibly inflexible.

But the downward dog, the talk about manly virtue, it's all almost too much. Where's the fun?

Happel, Georgetown's SigEp president, says not to worry: They know how to party. They just take an approach that's a little different now.

"If we're going to drink, we do it in moderate ways. And that's sort of what virtue is all about," he says. "Aristotelian ethics is all about moderation... A frat boy doesn't have any moderation. A fraternity man recognizes the fact that there are things out there to be enjoyed, like a good beer and a nice glass of wine."

Happel, 21, who just became legally able to drink anything alcoholic, says chugging is for boys. Slow sips — that's what a gentleman does.