Accessibility links
New Hampshire Campaign Goes Door to Door Even in these high-tech days of voter profiling and targeted e-mail, there's no better way to reach out to voters than by standing on their front stoop. Knocking on doors puts campaign volunteers face-to-face with voters. The key, according to a volunteer for John Edwards, is to "be nice, be friendly and don't bug people if they don't want to be bugged." 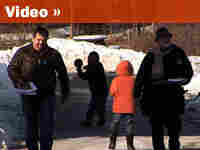 Don't be fooled by the pretty pictures of campaign rallies in New Hampshire.

Sure, you can be mesmerized by the banners and balloons and the sing-song cadence of the candidates. But none of that gets people to the polls on primary day.

Voters in New Hampshire need the personal touch. The phone call, the handshake, the knock on the door. Every campaign has compiled a list of the people who are likely to support their candidate. The names are culled from events and Internet lists and secret marketing databases. Even in these high-tech days of voter profiling and targeted e-mail, there's no better way to reach out to those people than by standing on their front stoop.

I went out with video producer David Gilkey to learn the art of street-level politics, and it wasn't hard to find the experts. On just about every cold sidewalk in New Hampshire is someone with a clipboard, carrying campaign literature and peering up at house numbers.

We chose to tag along with two volunteers from the John Edwards campaign as they knocked on doors in Portsmouth, but we could have picked any campaign, any town. We ran into canvassers for Bill Richardson and Barack Obama. I saw a team of women with Hillary Clinton signs heading up the next street. It's crowded with true believers out there.

In the end, we found that there are only a few tricks you need to learn to do this job. Wear sturdy shoes and two pairs of socks. Don't stand too close to the door when it opens. And be relentlessly upbeat. The guys we were out with never argued with voters; they just asked some gentle questions and reminded them to vote on Tuesday. But that may be enough. Political operatives believe that you can increase the likelihood that people will vote for a candidate by investing those voters in a campaign. Hand them buttons. Provide lawn signs. And most effectively, send a neighbor over to ask them if they are committed to vote for the candidate. Come Election Day, the voter won't want to disappoint the team.

Or that's the theory anyway. On the other side of the door, the constant stream of phone calls and door-knocks can drive a voter nuts. Even though we got to the front porch of Melissa Costa by 11 a.m., she had already received three campaign calls and two personal visits. She admitted that sometimes she just turns her hearing aid off and goes upstairs to avoid the politics. But most of the time, she opens the door and lets the volunteers give it their best shot.