Accessibility links
A Closer Look at Musharraf, U.S. Ally Against Terror In his first televised interview since the assassination of Benazir Bhutto, Pakistan's President Pervez Musharraf tells CBS's 60 Minutes that Bhutto took too many risks and is responsible for her own death. There is criticism that the White House may be making too many allowances for him.

Listen
A Closer Look at Musharraf, U.S. Ally Against Terror 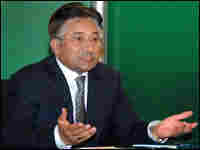 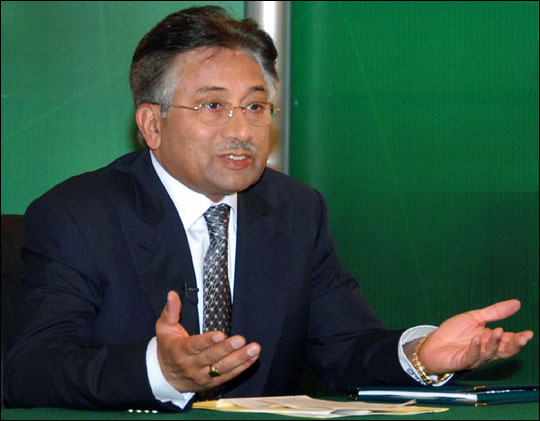 Pakistan's President Pervez Musharraf said assassinated opposition leader Benazir Bhutto took too many risks and is responsible for her own death.

Musharraf made the comments on CBS's 60 Minutes in his first televised interview since the Dec. 27 assassination of the opposition leader.

Though Musharraf and Pakistani relations with the U.S. have come under intense scrutiny in the wake of Bhutto's killing and ensuing violence, the Bush administration may not have any option except to continue the relationship.

There is criticism that the White House may be making too many allowances for Musharraf: signaling that it would be OK to delay the parliamentary elections from January to mid-February; not pushing for an international tribunal into Benazir Bhutto's death as it did with the assassination of former Lebanese Prime Minister Rafik Hariri; and forging a $500 million U.S. defense department contract with Pakistan for a fleet on F-16 fighter planes, which are not thought to be used for counterterrorism operations.

During the past few years, since it became apparent that Musharraf planned to hold on to power, he has lurched from one crisis to another, increasingly losing support of the Pakistani public and causing concern in the international community.

Throughout this time, the Bush administration has stood firmly behind Musharraf. Last week, while political turmoil raged across Pakistan, President Bush again called Musharraf an ally of the U.S.

Christine Fair, a south Asian specialist at the Rand Corp., said, "The Bush administration really sees Musharraf in the sort of terms that are standard for the Bush administration, which is: He's a good guy, he's the right man, he's the best thing we have in terms of an ally in the war on terrorism. Musharraf is clearly not the best person; increasingly he is very much part of the problem."

Many are shrugging off the Bush administration's support, though, and calling for Musharraf to step down because he is a threat to Pakistan's stability.

"What we've seen, particularly in the past six months, is that Musharraf has systematically undermined institutions such as the judiciary, the media, political parties," said Robert Templer of the International Crisis Group, a nonpartisan international monitoring organization. "This is not a man who is really looking for democracy; he's looking to cement his personal power and place."

Templer, director of ICG's Asia Program, said Washington's seemingly unquestioning support for Musharraf could backfire and cost the U.S. what little goodwill it has left with the people of Pakistan.

"They see it as enormous hypocrisy — America pretending to support democracy around the world while simultaneously doing everything in its power to prop up a military dictatorship in Pakistan," he said.

But Dr. George Friedman, CEO of the global intelligence service Stratfor, said the U.S. does not have much choice when it comes to dealing with Musharraf, especially when he was the army chief of staff.

Friedman said the U.S. needs the help and cooperation of Pakistan's army — however limited that help is — for the war in neighboring Afghanistan and to help contain al-Qaida and Taliban militants in Pakistan. He said it's critical that the U.S. maintains its relationship with Pakistan's military even if that means dealing with Musharraf.

"I think the U.S. policy is not really pro-Musharraf nearly as much as it is pro-army in the sense that we really need them. The Americans can live with anyone in the army who emerges in power," he said.

The Bush administration would be happy for Musharraf to quietly leave the scene, Friedman suspects, and be replaced by another general.

But, he adds, the White House would only alienate, or annoy, the Pakistani military by calling for Musharraf to resign, or by trying to play one individual off another, because so far there are no signs that the army wants Musharraf gone.

"While there are a lot of calls for the resignation of Musharraf, the army has made no decision. And when the army makes a decision, it will do so in order to have as orderly transition as possible," Friedman said.

But the Rand Corp.'s Fair said even if the U.S. continues to back Musharraf, it must also be seen to support Pakistan civil society and institutions.

"For example, the Supreme Court and the election commission. We should be working with the political parties, with the lawyer's guild, with the Pakistan human rights commission," Fair said.

Fair said the U.S. needs to make up for lost time now leading up to the Feb. 18 parliamentary elections.