Accessibility links
Military Officials Disagree on Impact of Surge One year ago, President Bush ordered an additional 30,000 troops to Iraq. Violence is down, and the situation seems to be improving. But some say that it has little to do with the surge, and fear that relief may be only temporary. 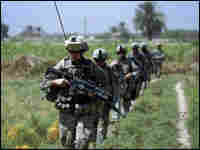 Troops from the 1-30 Infantry Battalion, part of the U.S. "surge," patrol along the Tigris River south of Baghdad in September. David Furst/AFP/Getty Images hide caption 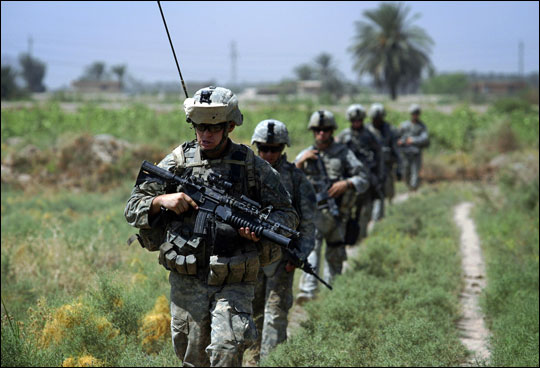 Troops from the 1-30 Infantry Battalion, part of the U.S. "surge," patrol along the Tigris River south of Baghdad in September.

More About the Surge

This week marks the anniversary of President Bush's "New Way Forward" speech to the nation. Click to view an interactive graphic of the Jan. 10, 2007, address, including NPR analysis. 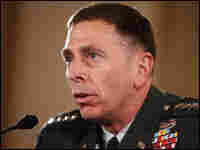 Gen. David Petraeus, the U.S. commander in Iraq, testifies before a joint hearing of the House Armed Services and Foreign Affairs committees on the state of the Iraq war in September. Tim Sloan/AFP/ Getty Images hide caption 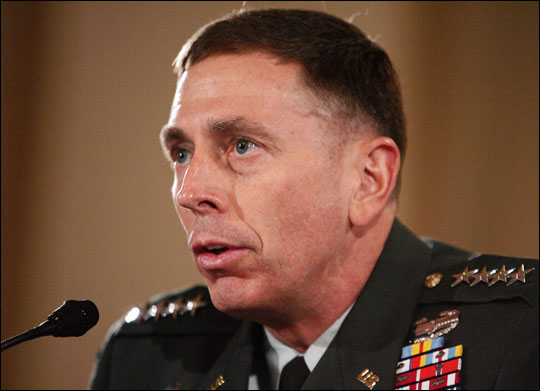 Gen. David Petraeus, the U.S. commander in Iraq, testifies before a joint hearing of the House Armed Services and Foreign Affairs committees on the state of the Iraq war in September. 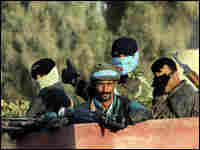 Members of an Iraqi Concerned Local Citizens group patrol in November during an air assault operation aimed at clearing and searching for al-Qaida suspects in the village of Sufeit, south of Baquba. Gianluigi Guercia/AFP/ Getty Images hide caption 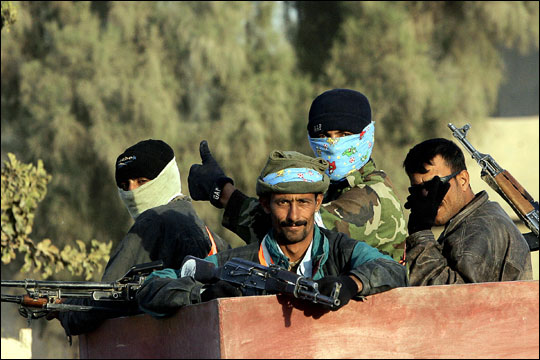 Members of an Iraqi Concerned Local Citizens group patrol in November during an air assault operation aimed at clearing and searching for al-Qaida suspects in the village of Sufeit, south of Baquba. 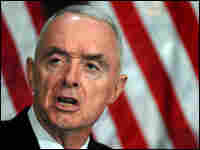 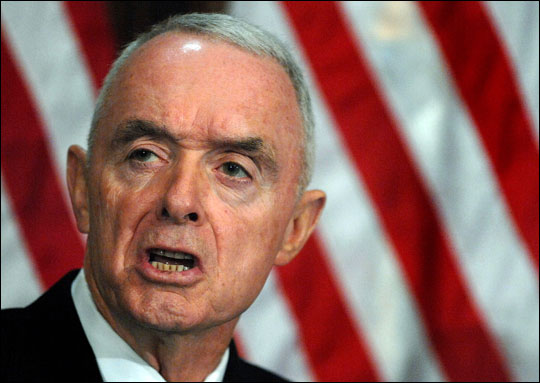 Gen. Barry McCaffrey speaks during a news conference at the U.S. Capitol in November.

A year ago this week, violence in Iraq appeared to be spiraling out of control, prompting President Bush to come up with a new strategy.

The idea was to create "breathing space" — to give Iraq's leaders a chance to take hold of their country. To do this, the president ordered a "surge" of 30,000 additional troops to be sent to Iraq.

One year later, supporters and even some detractors have hailed the surge as an unqualified success. Violence is down to levels not seen since 2004, and Iraqis are now back out on the streets.

Prayer of the Surge

By the end of 2006, the situation in Iraq was so bad that even supporters of the administration, like the editors of the neoconservative magazine The Weekly Standard, acknowledged that failure was just around the corner.

The magazine's key military writer, Frederick Kagan, was clearly distressed when he appeared on C-SPAN, saying, "The American people have become very frustrated with the course of this war. They should be frustrated. We're losing."

So Kagan, who also works at the neoconservative American Enterprise Institute, along with retired Army Gen. Jack Keane, presented the White House with a plan to change its strategy in Iraq. It called for a surge in troops.

The two men also pushed for a change in leadership. Keane suggested his protege, Gen. David Petraeus, an ambitious officer with a Princeton pedigree to boot.

The White House listened and agreed to roll the dice.

Effectiveness of the Surge

During the first six months of the surge, violence in Iraq reached an all-time high. Retired Army Col. Douglas Macgregor said, "Up until that point, the surge was simply providing more targets for the insurgents to shoot at."

But then around June, almost too fast for anyone to absorb, the violence began to plummet — a decline that continues and has turned one-time Iraq skeptics like former Gen. Barry McCaffrey into believers.

"The real debate, in my mind ... (is) not whether things are better in Iraq — they are unquestionably like night and day, (the) change in the level of violence. The real question is what caused it," McCaffrey said.

What caused it is open to debate.

"Improvements in security are a result of the greater number of coalition and Iraqi security forces and the strategy that guides the operations we conduct," Petraeus says.

But some current and former military officers with whom NPR spoke disagree.

Virginia Sen. Jim Webb, whose own son, a Marine, served in Iraq before the surge was implemented, is one of the dissenters.

"My son was there fighting in Ramadi when the situation began to turn around, and I don't believe that it would be appropriate for people to say that that was even part of the surge," says Webb.

McCaffrey and other former officers say that a surge of 30,000 additional troops into a country of 30 million could never have enough of an impact alone to turn things around.

"The least important aspect of the so-called change in strategy was the surge," McCaffrey says.

If it wasn't just the surge, how did it happen?

It could be, in part, exhaustion among Sunnis, tired of fighting and dying. Or also, in part, a cease-fire declared by the largest Shiite militia, others say.

But another part, and possibly the most significant, can be traced to the end of last May. That month, 126 U.S. troops died; it was the second deadliest month for U.S. forces during the war. Petraeus was under pressure to reduce those casualties.

"Petraeus seems to have concluded that it was essential to cut deals with the Sunni insurgents if he was going to succeed in reducing U.S. casualties," Macgregor says.

It's a somewhat abstract euphemism. The CLC program turns groups of former insurgents, including fighters for al-Qaida in Iraq, into paid, temporary allies of the U.S. military.

McCaffrey just got back from a five-day trip to Iraq where, he says, he "went to a couple of these CLCs, you know, five awkward-looking guys with their own AKs standing at a road junction with two magazines of ammunition — and they're there as early warning to protect their families in that village. I think that that's good."

Some 70,000 former insurgents are now being paid $10 a day by the U.S. military. It costs about a quarter billion dollars a year.

It's a controversial strategy, and Macgregor warns that it's creating a parallel military force in Iraq that is made up almost entirely of Sunni Muslims.

"We need to understand that buying off your enemy is a good short-term solution to gain a respite from violence," he says, "but it's not a long-term solution to creating a legitimate political order inside a country that, quite frankly, is recovering from the worst sort of civil war."

That civil war has subsided, for now. It's diminished because of massive, internal migration, a movement of populations that has created de-facto ethnic cantons.

"Segregation works is effectively what the U.S. military is telling you," Macgregor says. "We have facilitated, whether on purpose or inadvertently, the division of the country. We are capitalizing on that now, and we are creating new militias out of Sunni insurgents. We're calling them concerned citizens and guardians. These people are not our friends, they do not like us, they do not want us in the country. Their goal is unchanged."

Macgregor, a decorated combat veteran and a former administration adviser, articulates a view that is privately shared by several former and current officers. It's not that they believe the plan isn't working. It's that they see it as a dangerous one with potentially destructive consequences.

But McCaffrey argues that at $10 a day, the gamble is worth taking.

"We can pay them that for 10 years if we had to," he says. "Better we provide an infusion of cash where we're keeping a local night watchman for us on duty than we conduct combat operation. Money isn't even a factor we ought to take into account."

Macgregor says that people are desperate for success.

"They want to believe that we have done something positive for the population of Iraq. That we are helping them to become something positive," he says. "The thing that worries me most of all is what happens over the next 12 to 24 months in Iraq. Could we not have made matters worse in the long term? Are we not actually setting Iraq up for a worse civil war than the one we have already seen?"

Iraq can be seen as a conflict temporarily frozen.

The largest Shiite militia group has temporarily sworn-off attacking both the U.S. military and Sunni Muslims. Sunni groups are, for the time being, allying themselves with the United States for a fee. And in the north, Kurdish militants are focused on Turkey rather than Iraq. It is a waiting game.

And still, quietly, each group builds its own armory, preparing for the inevitability of fighting another day.