Accessibility links
'The Orphanage' A young mom and her family move to a dark, brooding country estate and act out a horror-movie version of Peter Pan. Directed by newcomer Juan Antonio Bayona, it's a creepily effective exercise in gothic technique. 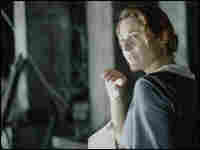 Laura's Turn: Belen Rueda in The Orphanage, an ambiguous psychological thriller in the Turn of the Screw tradition. Picturehouse hide caption

A young mom and her family move into a dark, brooding country estate and act out a horror-movie version of Peter Pan. Once they're settled in, memories come flooding back — of children who stay forever young in memory, who seem not quite of this world, who just want to play. And they want new playmates.

Mom, it turns out, grew up on the estate, which was then an orphanage, and remembers vaguely that kids kept disappearing. When her son, who has a terminal illness they've not told him about, also vanishes, Laura gets a bad feeling. Consulting with a police psychologist — and a psychic — she gets very different answers as to what might have happened, then comes up with her own answer. Produced by Guillermo (Pan's Labyrinth) del Toro and directed by newcomer Juan Antonio Bayona, the picture is a creepily effective exercise in gothic technique.