Accessibility links
Unclassifiable Musician Baby Dee Is Now 'Safe' Safe Inside the Day is the latest record from transsexual harpist and pianist Baby Dee. The songs tell the many stories of Dee's life, including her stints in freak shows at Coney Island and playing organ at a South Bronx church.

Fresh out of Candles

Only Bones That Show 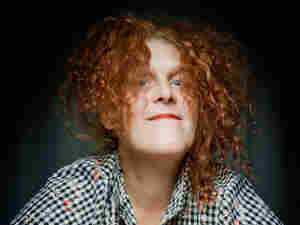 There have been many wild and wooly characters in the history of rock and pop music, but none wilder or woollier than a transsexual artist named Baby Dee. Her unusual life and career have led to her latest record — Safe Inside the Day.

Dee launched her musical career as a harpist in New York's Central Park in a bear costume. She says, "I just had this fuzzy picture in my mind of something sort of festive playing a harp. I don't know, it just sort of came to me."

She was a street performer, but Dee also studied music seriously and was so obsessed with Gregorian chant and the Renaissance that her conducting teacher suggested that she learn to play the organ and get a job in a church. Dee thought that was sensible advice. She'd been playing religious music for years, but the idea of working in a church had never occurred to her. "Within weeks of him saying that, I had a big job up in the South Bronx that became what I thought would be my life's work," she says.

What eventually changed Dee's mind about her life's work at the church was her sexuality. Dee is a transsexual, and after years of living what she says was a life of pretense as a man, she finally made the decision to become a woman.

Dee says the sexual transformation, for which she had such great hopes, was emotionally devastating: Everywhere she went, she was the constant object of staring and commentary. "You can go through a thing like that," Dee reflects, "and instead of having it make you better, it can just embitter you."

She also ended up working in side shows on Coney Island: "I was the Bilateral Hermaphrodite. I worked in circuses, like the Bindlestiff circus [and] the Kamikaze Freak Show."

Dee grew up in suburban Cleveland across the street from two guys named Bobby Slot and Freddie Weiss. In the song "The Dance of Diminishing Possibilities," on her new record, Safe Inside the Day, she tells the story of the day they decided to smash their old upright piano in the front yard. Dee was only 4, but she remembers vividly how the occasion turned into a kind of block party, with all of the neighborhood men joining in the demolition.

"What I learned was that inside the piano is a cast-iron harp that's very hard to wreck. You can't just hit it — you have to saw away at it with a hacksaw, and that wasn't very fun for them. So everything else went to bits, but that cast-iron harp inside sort of stayed. And the garbage men wouldn't take it, and it sat on their front lawn for months. And I fell in love with it."

In the song, the harp inside the piano serves as a metaphor for Dee's metamorphosis.

About eight years ago, Dee left New York and moved back to Cleveland to look after her ailing parents. Safe Inside the Day is a happy career resurrection. The producers, intense folkie Bonnie Prince Billy and guitarist producer Matt Sweeney, urged Dee away from her trademark harp and toward her piano music. The resulting songs burrow into some of the hard terrain of Dee's Cleveland childhood and then use it to reflect on the unusual twists and turns of her adult life. In that process, she manages to grow a kind of sinewy, deceptively simple poetry that matches her fragile emotional core with bursts of toughness and joy and artistic fearlessness.

Dee is not afraid anymore, if she ever was, to sound weird or out of the ordinary. She sings her outsized personality, and in turn, her pain and her tremendous warmth and quirkiness all come bouncing and shining through.