Listen
Clemens' Denial of Steroid Use Hard to Believe

Clarification: Morning Edition has a clarification to Frank Deford's commentary this week on baseball pitcher Roger Clemens. Deford spoke of a conversation that Clemens had taped with his former trainer, Brian McNamee. In a report for Major League Baseball, McNamee said he had injected Clemens with banned performance-enhancing drugs. Deford noted that on several occasions during the taped conversation, McNamee pleaded, "What do you want me to do?" Deford concluded, "Wouldn't an innocent man, with the tape secretly running, say, 'Just tell the truth?'"

While Clemens never replied to McNamee's questions in those exact words, Clemens did — elsewhere in that taped conversation — say several times that he wanted the truth out, and in one instance, told McNamee, "I just need you to come out and tell the truth." 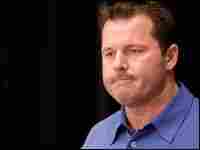 Roger Clemens pauses Monday during a news conference in Houston. The pitcher denied allegations by his former trainer Brian McNamee that he had supplied Clemens with performance-enhancing drugs. Dave Einsel/Getty Images hide caption 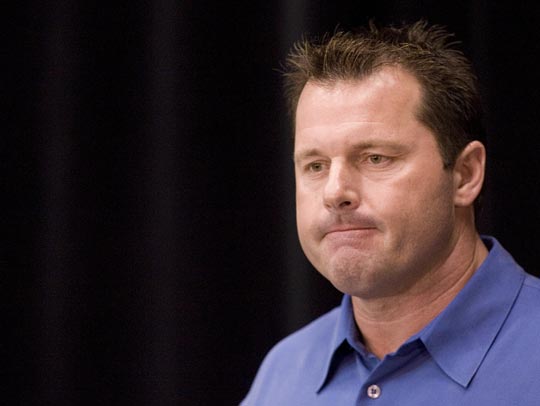 Roger Clemens pauses Monday during a news conference in Houston. The pitcher denied allegations by his former trainer Brian McNamee that he had supplied Clemens with performance-enhancing drugs.

Most of you never heard of Ralph Beard, or if you did, had forgotten him by the time he died a few weeks ago just short of age 80. But back in the 1940s, Beard was a terrific All-American, who led Kentucky to two national championships and the United States to a gold medal in the 1948 Olympics. He was already a first-team NBA All-Star when it was revealed that he had taken money from gamblers to shave points in games at Kentucky.

Beard, like so many other players of that era, was summarily banned for life from the game. He admitted his guilt, too, saying that he had simply grown up poor and just couldn't resist taking the money. He lost it all for only about $700 — branded forever as a fixer.

We tend to be more critical of athletes, like Ralph Beard, who conspire to lose, rather than those, like steroid users, who cheat trying to win.

But the fact is, that it makes no difference in which direction an athlete cheats; either way he is distorting fairness, which is the very essence of sport. Ralph Beard's transgressions cost his own team victory. If Roger Clemens — or any other player named in the Mitchell Report — is guilty as charged, then he cost other teams their fair due. What, pray, is the difference?

Now, of course, Clemens has taken a refrain from so many other guilty athletes' lyrics by claiming that he didn't know that he was being given a banned substance. Barry Bonds swore he thought it was all just flaxseed oil. Remember?

But here Clemens is, disputing his trainer, Brian McNamee, who testified — under threat of jail if he was caught lying — that he injected Clemens with steroids and HGH.

The sad and bizarre phone call with McNamee that Clemens taped last Friday and then played in public seemed only — to me — to confirm the pitcher's guilt.

McNamee was distraught for having testified against his old friend and meal ticket. Time and again, he pleaded: "What do you want me to do, Roger?"

Wouldn't an innocent man, with the tape secretly running, say: "Just tell the truth, Brian." And never did McNamee volunteer that he had lied. He seemed only to regret that the truth had hurt so.

All right, I'm sorry. Perhaps I'm just too cynical. Perhaps I have just heard it all too often — even emotionally, to my face — from athletes claiming, with just as much dramatic insistence as Clemens, that they were innocent, only to be convicted later.

Even after he told the truth, Ralph Beard spent more than 50 years of his life in shame. If Roger Clemens is guilty, then he deserves no better. Let's put the right word on it. Any player who took steroids is a fixer. He fixed games.