Accessibility links
'Cloverfield': History Repeated . . . with Monsters The monster movie Cloverfield debuts this weekend. Bill Tsutsui, a professor of modern Japanese history, looks at the parallels between the new film and the monster classic, Godzilla. 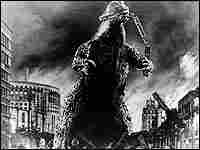 Cloverfield, the latest film by director J.J. Abrams, shows a Lower Manhattan eerily reminiscent of the days following Sept. 11. A giant monster demolishes the city, leaving it a smoldering and chaotic mess. Cloverfield is not the first film to make a thinly veiled reference to a scar on the collective conscience of a nation.

Fifty-four years ago, Godzilla gave more than a nod to a historic tragedy by using a gargantuan beast to terrorize a city. In that case, says Bill Tsutsui — a professor of modern Japanese history at the University of Kansas — Godzilla was referencing the dropping of the atomic bomb on Japan and the devastation of World War II, which had ended just nine years prior.

"We see Tokyo consumed in flames and of course this brings to mind for viewers the fire bombings, which again, were only less than a decade away," Tsutsui says. "You can't help but think of all those familiar images that all of us see of Hiroshima and Nagasaki: a wasted landscape, rubble everywhere, a few spindly burnt-out tree trunks. It really would have captured for Japanese audiences of the day very close memories of the war."