I'm Steve Inskeep. And this is Hillary Clinton.

Senator HILLARY CLINTON (Democrat, New York; Presidential Candidate): I want especially to thank New Hampshire. Over the last week I listened to you, and in the process I found my own voice.

INSKEEP: So there's one explanation for her surprise win New Hampshire last night. Let's find out what else we can from NPR's Juan Williams, who's in New Hampshire.

And, Juan, what were Clinton's advisers saying before the results were known?

JUAN WILLIAMS: Well, before the results, Steve, they were pretty much down. They thought that this was going to be a loss. They were talking about the fact that Bill Clinton didn't win one before Georgia; looking down the road, thinking about what they could possibly do in terms of even bringing new people into the campaign, re-jiggering the message. They did not expect to win here.

INSKEEP: So they did not expect to win, but they did have a campaign organization, it's often said, in New Hampshire. What kind of organization was that?

WILLIAMS: An organization that was very strong in terms of making calls, getting out the votes, and I think in some ways they understood the message better than Mrs. Clinton and her national team, because they, for example, were sending out leaflets here highlighting the fact that Hillary Clinton has been a strong supporter of women's right to choose on abortion and presenting Barack Obama as an unknown, unsteady ally in that cause - something, of course, very important to Democratic female voters. Among union members, seniors, people over 40, and especially people over 65, Hillary Clinton had a dominant performance Tuesday night. So in all those ways you see you the power of a Democratic Party machine in New Hampshire benefiting the Clinton campaign.

INSKEEP: Democratic Party machine. Who were the people or the kinds of people that Hillary Clinton had on her side even as it seemed that her campaign was slipping?

WILLIAMS: Well, elected officials, union officials, and you're talking about people who have been involved, of course, going to back to Bill Clinton's comeback effort back here in '92, and of course he finished second and become the comeback kid. Hillary Clinton has actually won this to become her own version of a comeback kid.

INSKEEP: So Democratic elected officials in New Hampshire were with Hillary Clinton? Could Obama or John Edwards, for that matter, bring in anybody to compare?

WILLIAMS: Well, no. What the effort for Obama was really the tremendous energy, the sense of history being made by the first African-American to really been a leading contender for his party's nomination. If you look at people who were casting their first vote in a primary, plus 12 for Obama; if you look at the independents, people who weren't registered as Democrats or Republican, plus seven for Obama; and with young people, those under 30, particularly those 18 to 24, two-thirds of them voting for Barack Obama.

So those were newcomers to the process, people outside of the Democratic Party or the union organizations, who were the primary supporters for Barack Obama.

INSKEEP: So you've got newcomers favoring Obama, you've got solid Democrats and organizational Democrats sticking with Hillary Clinton and coming up with a lot of votes. And I want to draw on one voter group - women. Women voters in Iowa seemed to go for Barack Obama by a substantial and surprising margin. What did Hillary Clinton's campaign do or say to try to win the women's vote back in New Hampshire?

WILLIAMS: I think Hillary Clinton presented herself as a woman who understood the struggles of women in American society, often talking about issues relating to health care, relating to caring for children, and having to deal with children while you're a working mom.

She had a tremendous advantage with the women with children, married women with children in particular. And don't forget she got emotional, I think that may have played to her advantage. She shows a little bit of emotion and people see it as breaking through the ice queen image and making it clear she cares deeply about this process. I think that's the big difference between the Hillary Clinton that we saw campaigning in Iowa and the Hillary Clinton we saw on stage, especially in the last few days here in New Hampshire.

Clinton, McCain Look Ahead to Next Round 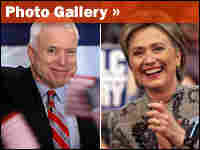 Michigan Is Next: NPR's Steve Inskeep and Mara Liasson

Hillary Clinton and John McCain are New Hampshire's comeback kids, remaking their stalled presidential campaigns and blunting the momentum of opponents as they head into fresh contests in Michigan and South Carolina.

"I felt like we all spoke from our hearts and I am so gratified that you responded," Clinton told cheering supporters outpacing Sen. Barack Obama in the first-in-the nation primary. "Now together, let's give America the kind of comeback that New Hampshire has just given me."

New Hampshire's record turnout also revived the White House hopes of Republican John McCain, seven months after his campaign had seemed to be down for the count.

"Tonight, we sure showed them what a comeback looks like," a grinning McCain told supporters as they chanted, "Mac is back!"

"I am still fired up and ready to go," a defeated Obama told his backers. "We know the battle ahead will be long. But always remember that, no matter what obstacles stand in our way, nothing can stand in the way of the power of millions of voices calling for change."

New Hampshire was a bitter blow for Romney, who spent millions of dollars of his own money in hopes of winning the kickoff Iowa caucuses and the first primary - and finished second in both. Huckabee, who won the leadoff Iowa GOP caucuses last week, was running third in New Hampshire.

After Iowa, Clinton and her aides seemed resigned to a second straight setback. But polling place interviews showed that female voters — who deserted her last week — returned to her column in New Hampshire. She also was winning handily among registered Democrats. Obama led her by an even larger margin among independents, but his campaign was less successful in turning out young voters than it had been in Iowa.

Word of Clinton's unexpected triumph set off a raucous celebration among her supporters at a hotel in Manchester — gathered there to celebrate a New Hampshire primary every bit as surprising as the one 16 years ago that allowed a young Bill Clinton to proclaim himself "the comeback kid."

Her performance came as a surprise even to her own inner circle. Officials said her aides were considering whether to effectively concede the next two contests — caucuses in Nevada on Jan. 19 and the South Carolina primary a week later — and instead try to regroup in time for a 22-state round of Democratic contests on Feb. 5.

There have also been rumors that a campaign shake-up was in the works, with longtime Clinton confidante Maggie Williams poised to come aboard to help sharpen the former first lady's message.

Obama drew huge crowds as he swept into the state after winning Iowa. Confident of victory, he stuck to his pledge to deliver "change we can believe in," while the former first lady was forced to retool her appeal to voters on the run. She lessened her emphasis on experience, and sought instead to raise questions about Obama's ability to bring about the change he promised.

The grind took a toll on both of them.

Obama suffered from a sore throat, while Clinton's voice quavered at one point when asked how she coped with the rigors of the campaign. That unexpected moment of emotion became the talk of the final 24 hours of the campaign.

The Republican race turns next to Michigan, where McCain and Romney already are advertising on television, and where both men planned appearances on Wednesday. Huckabee also was expected to campaign in the state.