Accessibility links
When Sudden Death Strikes Athletes The sudden death of several prominent young athletes has drawn attention to the problem of silent heart disease. Studies are underway to determine who is at risk. 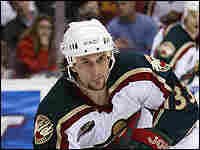 Sergei Zholtok, of the Minnesota Wild, during a game against the Los Angeles Kings in 2004. Later that year, he died suddenly while playing in a game in Belarus, during the NHL Lockout. Doug Benc/Getty Images hide caption 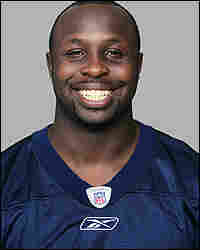 Damien Nash of the Denver Broncos. He died suddenly at age 24 shortly after playing in a charity game. Getty Images hide caption 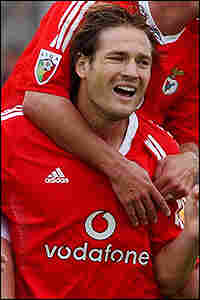 Hungarian soccer player Miklos Feher celebrating a goal with a teammate. He died in 2004 during a game in Portugal. Manuel de Almeida/AFP/Getty Images hide caption 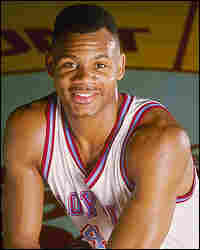 Basketball all-star Hank Gathers of Loyola Marymount University in 1989. He died of a heart attack due to an enlarged heart the following year. Tim de Frisco/Allsport/Getty Images hide caption

The sudden death of several prominent young athletes has drawn attention to the problem of silent heart disease. Studies are under way to determine who is at risk.

The problem of undetected heart disease in young athletes came to prominence in 1990 with the death of Hank Gathers, 23, then an All-American basketball star at Loyola Marymount University. He collapsed on the court during a game with the University of California, Santa Barbara, and died shortly thereafter. He had been treated for an abnormal heartbeat, but after his death, a medical examiner found that he had suffered from cardiomyopathy, an enlarged heart.

Then, the 1993 death of Boston Celtic Reggie Lewis brought new calls for more regular testing of athletes for heart disease. Lewis collapsed during the first game of the 1993 National Basketball Association playoffs with the Charlotte Hornets. Doctors diagnosed myocarditis, an uncommon disorder in which the heart muscle becomes weakened and inflamed. Infections are the usual cause. Lewis died soon after the playoffs at the age of 27 during an off-season practice session at Brandies University, outside Boston.

It's not known precisely how many athletes are at risk for sudden death from heart problems like these — or how many actually die each year. Most deaths aren't publicized because they happen in young athletes who are just beginning their high school or college sports careers.

To gather more information, Dr. Barry Maron, of the Minneapolis Heart Institute Foundation, established a registry of sudden deaths in young athletes. Since 1985, the registry has collected almost 1900 reports of sudden deaths in young athletes who participated in competitive sports. The most frequent cause of death was hypertrophic cardiomyopathy (HCM), a condition where the muscles of the left lower chamber of the heart thicken and enlarge.

On Nov. 23, 2007, Kennedy collapsed at his in-laws' home in Tampa shortly after going to bed early. Preliminary autopsy report says that had hypertensive heart disease, which can lead to HCM. Final report due out soon.

Olympic hopeful Shay collapsed and died 5 1/2 miles into the Olympic marathon trials in New York City on Nov. 3, 2007. Shay was diagnosed with an enlarged heart at age 14. The autopsy report is still pending, awaiting more test results, according to the New York City Medical Examiner's office.

Nash died on Feb. 24, 2007 of undetermined natural causes believed to be "of cardiac origin," according to the St. Louis (Mo.) County Medical Examiner's office. He collapsed shortly after playing in a benefit game for the Darris Nash Find a Heart Foundation, a charity named for his older brother that raises money for heart transplant research. Darris Nash received a new heart after suffering dilated cardiomyopathy, which usually is not genetic.

Collier, a 7-foot, 260-pound football player, had an "enlarged and abnormal" heart, according to the Georgia chief medical examiner, Kris Sperry, who ruled that Collier died of a sudden cardiac rhythm disturbance. Sperry said that Collier, who died Oct. 15, 2005, had passed the pre-season physical, though electrocardiograms (EKGs) administered to Collier in 2003 and 2005 showed "some indication of electrical abnormalities." Sperry said he found no evidence Collier had ever been told he had the abnormal EKGs.

Herrion collapsed in the locker room minutes after a preseason game in Denver on Aug. 20, 2005. He was pronounced dead an hour later. An autopsy found that his right coronary artery was nearly blocked. The sports network ESPN later asked four cardiologists to examine the autopsy report and each concluded that Herrion had HCM.

Zholtok was playing in a game in Belarus during the National Hockey League lockout that year. He left the Nov. 3, 2004 game and collapsed on the way to the locker room, dying a few minutes later. An autopsy found that he died of heart failure, which sometimes accompanies HCM. Zholtok had previously been diagnosed with an irregular heartbeat.

Feher collapsed during a Jan. 25, 2004 game in Portugal. News reports citing Portugese authorities said he died from an abnormal heart rhythm triggered by HCM. One report said Feher had undergone extensive tests a month prior, including an EKG, and that nothing unusual was found.