Accessibility links
U.S. Wary of Warming Syrian-Turkish Ties Syria is rapidly improving relations with Turkey, a key U.S. ally in the Middle East. This development could have substantial repercussions in the region — and particularly for Washington, which views Damascus as a dangerous regime. 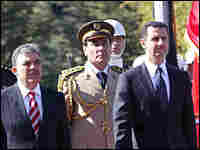 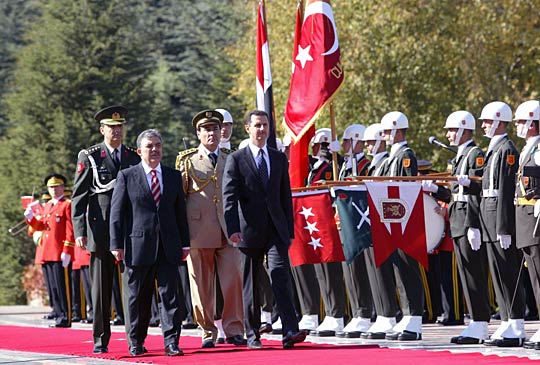 One place President George Bush is not visiting on his tour of the Middle East is Syria. Relations are icy, with Washington and Damascus at odds over Lebanon, the Arab-Israel conflict, the Iraq war and Iran.

But Syria is rapidly improving ties with a key U.S. ally in the region, Turkey. And that is a development that could have substantial repercussions, particularly for Washington.

Syrians Have Much to Gain

Syria's ambassador in Washington, Imad Moustapha, characterizes his country's ties with Turkey as a "honeymoon" and the "best possible relations between any two neighborly countries in the world."

Such enthusiasm over ties with Turkey is a worry for the United States, says Omer Taspinar, a Turkish analyst at the U.S. War College.

"I think the Syrians have a lot to gain. That's why it is in their interests to send a signal they are not isolated and they have Turkey on their side.

"Syria is perceived as the underdog against the U.S. So, the more the U.S. says, 'Don't talk to Syria,' I think, the more it will become attractive for Turkish public opinion," Taspinar says.

And that may be why Syrian President Bashar al-Assad got such a warm welcome on a recent trip to Turkey. With his attractive young wife, Assad toured the capital with Turkey's president and prime minister. The TV cameras were there as they opened a new Turkish shopping center. The coverage of smiling presidents and their wives surprised even Syrians, says George Sageur, a Syrian-American businessman.

The response to the president and his wife — as the face of Syria — has been tremendous in Turkey, he says. They were "received very, very well indeed."

It's a marked improvement from tensions a decade ago. The two countries seemed on the verge of war after Turkey accused Syria of harboring a Kurdish rebel leader.

But that was all before the U.S. invasion of Iraq.

Now, Turkey and Syria have shared concerns. Both have sizeable Kurdish populations. Both worry about the nationalist goals of the Kurds in neighboring Iraq. And both are wary of U.S. plans in the region, says Taspinar.

"The real impetus for these visits is the Kurdish question — let's not miss the real picture here. I think Turks are very much disillusioned with this whole Iraq episode."

Syria has benefited from that disillusionment.

Alliance with Turkey Serves as Balance to Iran

Because of expanded trade relations, Turkish language classes in Damascus are now popular for Syrian Arabic speakers. Syria's deputy prime minister was in Turkey last week to sign an agreement for a joint natural gas pipeline.

"The relationship with Turkey has an economic aspect, but it is also very important for domestic legitimacy," says Josh Landis, an American academic who writes an influential blog on Syria.

Landis says the new partnership with Turkey has helped Syria's president blunt a domestic problem: Many of Syria's majority Sunni Muslims do not like Assad's close relations with Shiite Iran.

"Syria is very unhappy in this Shiite alliance because 80 percent, 75 percent of the country is Sunni. It's caused a lot of angst among your average businessmen in Syria," Landis says.

Turkey is a predominantly Sunni Muslim country. And on the political front, Turkey's moderate politics could offer an alternative to Iran, says Ibrahim Hamidi, a Syrian journalist and analyst.

And this is exactly what Turkey's new government wants, says Henri Barkey, a professor of international relations at Lehigh University. He says Turkey's leaders intend to become players in Middle East politics. The opening to Syria is a major move to do just that.

"It is quite smart on their part ... to say, 'Look we have good relations with everybody, everybody can come and talk to us, we will listen to anybody, we will help anybody,' so this is the way the Turks are pushing themselves up in the region," Barkey says.

It is a new role for Turkey, a welcome lifeline for Damascus, and a problem for the United States: Turkey, a key U.S. ally, is reaching out to Syria — which President Bush has called a dangerous regime.