Accessibility links
With Climate Change Comes Floods A warming atmosphere also means a warming ocean. As water heats up, it expands and triggers a sea level rise around the world. By 2080, a U.N. panel predicts this will have devastating consequences for millions of people around the world rich and poor alike. 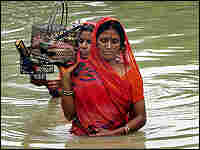 Climate change is disturbing the delicate balancing act that people have with water. Water is critical to life — for drinking and irrigation, and as a source of food, transportation and recreation. But too much water — or water that comes at an unexpected time, or in unexpected places — can be a big problem.

As global temperatures rise, many places are threatened by flooding. A recent study looking at who is at risk shows many coastal cities could be hit hard, particularly heavily populated cities in Asia. But in terms of economic loss, the Organization for Economic Co-operation and Development found that the top 10 cities at risk are all in three industrialized countries: the United States, Japan and the Netherlands.

Warming water can cause rises in sea levels and strong storms, with the potential to impact people around the globe.

As global temperatures rise, oceans get warmer. And when water heats up, it expands and sea levels rise.

The United Nations' Intergovernmental Panel on Climate Change (IPCC) reports that from 1993 to 2003, global sea level rose about 3 millimeters each year, and approximately half of that increase is attributed to the ocean expanding as it warms.

About one-quarter of this rise is attributed to melting glaciers and ice caps. Melting from the Greenland ice sheet and the Antarctic ice sheet combined is estimated to account for about 14 percent of observed sea level rise. If the Greenland ice sheet melted entirely, sea level would rise 20 feet around the world. But such a catastrophic melt isn't projected for thousands of years, if it happens at all. Currently there is no scientific consensus on how much of these giant ice sheets will melt, or when that might happen.

"Scientists do not understand the ice process enough for accurate predictions of Greenland and Antarctica," says Carol Auer, an oceanographer with the National Ocean and Atmospheric Administration.

It is also not known exactly how much warmer the planet will get.

"We can change this around, at least to a degree," Auer says. "It's not a disaster yet."

A sea level rise of just a few millimeters a year may seem insignificant, but Auer says that on flat land, it adds up. She says that a half-inch of vertical sea level rise translates to about three feet of land lost on a sandy open coast, due to long-term erosion. And even a slightly higher sea level can cause more dramatic tides in deltas and estuaries.

"Basically the story is because sea level rises have made everything a little higher, when a storm hits that makes for more vulnerability," Auer says. The higher sea level gives a storm surge a boost to reach further inland.

Auer points to two hurricanes of similar strength that hit the Chesapeake Bay area. The first hit in 1933. The second was Hurricane Isabel, which pummeled the East Coast in 2003.

"Isabel was far more damaging because there had been about a 20-centimeter rise in sea level," Auer says.

A warming planet also means snowy regions become rainy. People who live near rivers could see more flash floods: Melting snow slowly trickles into rivers, but rain can dump large amounts of water all at once.

In some places, like California, where rain and snowfall patterns are already unpredictable, there are elaborate systems of dams and reservoirs to keep a steady supply of water available — and to handle flood control. As snow and rain patterns shift even more, it becomes increasingly difficult to know when to keep the reservoirs full to maintain ecosystems, recreational areas, hydropower and water supply — and when to allow them to empty and make space for flood control.

"The problem is that you have a constant tension between flood control reserve and the desire to keep (the reservoirs) full," says Jeffrey Mount, a geologist who studies flooding at the University of California at Davis. "Climate change exacerbates that pressure."

Low-Lying Areas Most at Risk

Densely populated, low-lying areas, such as large river deltas and small islands, are at the greatest risk from flooding. Many of these areas are found in Asia, such as the Ganges River Delta, the Mekong River Delta and islands in the South Pacific.

In its own estimates, the IPCC predicts that by 2080, millions more people will experience flooding every year due to sea level rise. If global temperature rises by about 1 degree Fahrenheit in the next century, scientists estimate the sea level will rise seven to 15 inches. IPCC's worst-case scenario, which is about a 7 degree Fahrenheit rise in temperature, shows a global sea level gain of 10 to 23 inches.

Poor communities will have a hard time adapting to increased flooding: They don't have the resources to build protection for their cities or to help people move. These communities also tend to rely heavily on local water and food supplies. Water may become contaminated by a major storm, and a rising sea level can contaminate wells. Salinity from rising sea levels also can cause serious problems for farmers.

The wealthy, too, will experience the impacts of greater flooding. "Everyone is building close to the water, building in vulnerable areas," NOAA's Auer says.

She says it is important to protect wetlands and coastal habitats that are threatened by overbuilding, because these wetlands serve as natural barriers to storm surges.

When walls are built between homes and beaches or wetlands, to protect development, they actually put the homes in more danger in the long run, Auer contends. The walls block wetlands and beaches from expanding inland, so with a wall on one side and encroaching water on the other, in the end, the wetlands disappear. Homes are then left vulnerable, right at the edge of the water, she says.

"Flooding wouldn't need to be a problem if people moved further back from the water," Auer says. Climate change, she says, is just "another nail in the coffin to preexisting problems."

Both Auer and Mount say that in the United States, people need to think carefully about where they are building, and about which areas could become flood zones in the future. They also agree that there probably won't be any major change until insurers take climate change into account and refuse to insure high-risk areas.

Mount adds that flooding is natural and is important for ecosystems.

"Flooding is only a problem when there are people in the way," he says. And lack of planning for a changing climate makes that much more likely to be the case.