Accessibility links
U.S., Iran Release Videos of Hormuz Incident Tensions between the United States and Iran have again surfaced. Each country has released vastly different videos showing what they say captures an incident in the Strait of Hormuz last Sunday morning between American Navy warships and fast boats of the Iranian Revolutionary Guard. 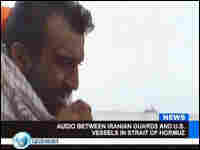 An image taken from a video broadcast Jan. 10, 2008, by the Iranian English-language channel Press TV shows the Iranian version of an incident in the Strait of Hormuz with U.S. warships. -/AFP/Getty Images hide caption 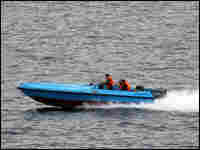 In this U.S. Navy video, small crafts suspected to be from the Islamic Republic of Iran's Revolutionary Guard Navy, maneuver aggressively in close proximity of the a U.S. Navy Aegis-class cruiser. U.S. Navy via Getty Images hide caption

The United States and Iran have released contrasting videos showing what they say are details of an incident between U.S. and Iranian naval vessels, which occurred early Sunday morning in the Strait of Hormuz, in the Persian Gulf.

The incident first set off a war of words. Now it is a war of competing images.

Both sides agree on only these facts: U.S. Navy ships were passing through the Persian Gulf when they were approached by Iranian fast boats.

The U.S. Navy released a video on Monday showing the Iranian boats darting around the warships. An American sailor is pictured on the bridge. Radios crackle warnings to the Iranian boats, a warning whistle is blown, and then the Americans pick up this ominous message:

"I am coming to you ... You will explode after minutes."

The Pentagon called the Iranian behavior provocative. But U.S. officials concede they can't pinpoint the source of the radio message. They said it could have come from the Iranian fast boats, another ship or even a shore station.

Adm. Mike Mullen, the chairman of the joint chiefs of staff, said Friday that the incident may signal a new, more aggressive strategy by Tehran in the Gulf. Mullen and other defense officials could recall no similar incident in recent memory.

"I think what concerned us was first, the fact that there were five of these boats," Defense Secretary Robert Gates said Thursday. "And second, that they came as close as they did to our ships and behaved in what appeared to be a pretty aggressive manner."

But on Monday, the Iranian foreign ministry said the incident was routine and normal.

On Wednesday, they called the American video a fabrication. Thursday, they released their own video on Iran's English-language satellite channel, Press TV.

The Iranian pictures show no hint of confrontation. Instead, the video shows an Iranian Revolutionary Guard sailor standing on a small boat, radioing the Americans and receiving a standard reply.

Responding to the Iranian charges of fabrication, Gates dismissed them, saying the United States is more credible.

U.S.-Iranian tensions in the Gulf go back years. Harlan Ullman, a retired Navy officer who commanded a ship in the Gulf during the 1980s, believes the American tape is real. But he's also not ready to say the Iranian tape is fabricated.

"Until we analyze it," Ullman says, "I'm going to withhold judgment."

Ullman says there are ways to check the authenticity of the Iranian tape, such as matching Iranian radio transmissions with those recorded by the Americans.

Ullman agrees with American officials that whatever happened in the Strait of Hormuz is a serious event, and one that both sides should try to avoid. When similar confrontations occurred with the Soviet Navy during the Cold War, Ullman says both sides signed an agreement to prevent incidents at sea.

Ullman says the United States and Iran should work out a similar agreement, which may help. Today, the U.S. Navy said one of its ships had fired warning shots at an Iranian boat in the Straight of Hormuz in December.