Accessibility links
Candidates' Kids Find Ways to Reach Out Through blogs, YouTube videos and good old-fashioned door-to-door campaigning, many of the presidential hopefuls' sons and daughters are attempting to sway voters their own age. The question is whether the efforts are working. 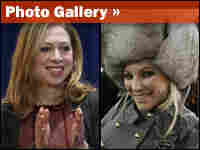 Through blogs and YouTube interviews, the children of the presidential contenders are getting involved in the campaigns. hide caption 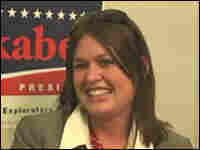 As the presidential candidates gear up for next week's primaries and caucuses in Michigan, Nevada and South Carolina, many of their children are keeping busy as well. Through blogs, YouTube videos and good old-fashioned door-too-door campaigning, many of the contenders' sons and daughters are attempting to sway voters their own age.

Prominent among these is John McCain's 23-year-old daughter, Meghan. Termed by some observers as his "blog bombshell" and "secret weapon," the stylish blonde has been posting photos, journal entries and commentary on McCainblogette.com. Although there are references to politics, she also discusses more personal matters, like her favorite songs — Kanye West's "Stronger" and Tom Waits' "Make it Rain" — and her obsession with shoes.

She started her Web site as a way to show a side of her 71-year-old father people might not otherwise see, she says.

Meghan isn't the only one who's been helping support a parent's campaign — there's an entire section of Mitt Romney's campaign Web site dedicated to his five sons. Each has his own blog. The topics covered range from polls to baseball.

Mike Huckabee's daughter Sarah, 25, has reached out online in a different way — opening up in a frequently viewed interview on YouTube. The interviewer, Michael Green of the political website SCHotline, was bold enough to ask her about her relationship status and if she's ever worn a miniskirt. (Answers: single and no).

Green says he was originally a solid supporter of Mitt Romney, but after his interview with the charming Sarah he may have changed his mind.

"I got to know Mike Huckabee a little better because of that. There is genuineness throughout the whole family," he says.

Cate Edwards, 25, who is campaigning for her father John Edwards, says candidates' kids can play a key role in conveying their parents' message to younger voters.

"I think a lot of times young people feel more comfortable talking to people their own age about politics. Because especially for first-time voters, especially for people who aren't engaged over the long term in politics, it can be a relatively intimidating process."

But do all these blogs and videos and campaign appearances by the sons and daughters actually win youth votes?

"I don't think that that is what turns them to the polls for a particular candidate. What does is candidates talking to young people about issues they care about," says Kleeb

Winning votes isn't the only priority for every son and daughter of the presidential candidates.

"That's never been my personal goal," says Megan McCain, adding that she aims to show young people that politics can be fun.