Accessibility links
Researchers Grow a Beating Heart Scientists constructed a beating rat heart in the lab. They used a scaffolding of tissue created from a rat cadaver. Then, living heart cells were added and given a jolt. 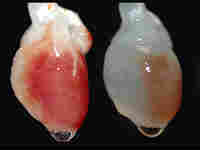 The process of building a new heart starts with a cadaveric rat heart, shown above. As cells are washed away, a whitish skeleton of soft tissue is left behind. Thomas Matthiesen hide caption 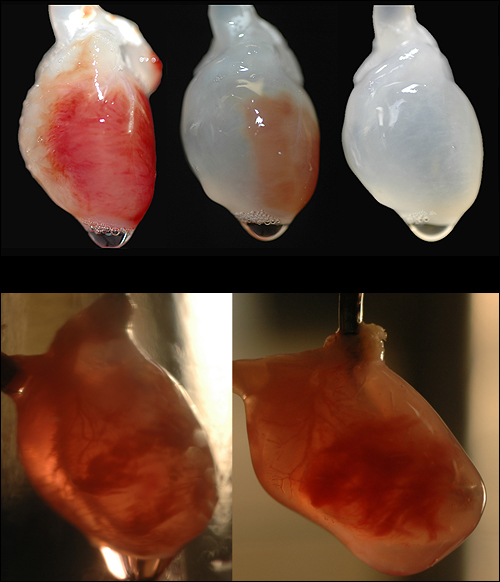 The process of constructing a new rat heart started by soaking the heart in a detergent solution to remove old cells (top row). Once the cells were gone, the heart became translucent (top right). When living cells were added, they grew on the structure left behind (bottom).

A custom-built replacement organ sounds like science fiction, but researchers working in Minnesota have figured out a way to construct a beating rat heart in the lab.

Building a whole heart is much more challenging than simply growing heart cells in a dish, something that labs can do routinely. The heart is a round, meaty muscle the size of a fist, with four chambers and a complicated network of blood vessels.

"The heart is a beautiful, complex organ," says Doris Taylor, director of the Center for Cardiovascular Repair at the University of Minnesota in Minneapolis. "We realized pretty quickly that we weren't going to be able to figure out how to build that in a dish."

Taylor and her colleagues knew that when nature builds a heart, the cells attach to a kind of scaffold, or frame, made of things like proteins. "It's basically what's underneath all of the cells, the tough part that the cells make to hold each other together," she says.

The researchers decided to see if they could take a dead heart and remove all of its cells, leaving this scaffold behind. The scientists thought they could then use the scaffold to construct a new heart out of healthy cells.

Harald Ott, who now works at Massachusetts General Hospital, was working in Taylor's lab, and he took this on as a kind of side project. He started treating rat hearts with all kinds of different solutions.

"We had a big chemical shelf in the lab, from A to Z," recalls Ott. "So I started using all sorts of chemicals starting at A."

He tried enzymes, but they dissolved the heart. Other chemicals made the heart swell and change shape. Then one day, Ott grabbed a chemical known as SDS. "It's a regular component of shampoo," he says. "It's a soap."

At first nothing seemed to happen. Then, patches on the heart began to turn white. The red part, the meaty part, was disappearing.

"You can see the detergent working and making the heart literally translucent so it turns into a jellyfish sort of appearance," says Ott, who explains that it looks just like a jellyfish shaped like a heart, with all the organ's intricate 3-D structures.

Then Ott and his colleagues took heart cells from newborn rats and put them onto the scaffold. The cells stuck and started to grow. The heart became red again.

But it didn't beat, so the researchers attached a tiny pacemaker and the heart began to rhythmically wiggle. After a while, it would beat even without the pacemaker. Taylor says it was an amazing thing to see.

"It was the best we could possibly hope for," she says.

Still, the heartbeat wasn't that strong, just 2 percent of the pumping action of an adult heart. Taylor thinks they can improve on this work, reported in the journal Nature Medicine.

And she's started working with pig hearts, which are about the size of human hearts.

"One possibility is that we could take a pig heart scaffold and then use your cells to repopulate that," Taylor says. She notes that since cells are always slowing replacing their scaffold, eventually the heart would be entirely human.

Taylor's lab is also exploring this approach for other organs. Her group has shown that it can get a similar kind of scaffold from the liver, lungs and kidneys.

"This approach does address some of the major challenges that one faces in thinking about how to generate a functional heart that really has the structure and function of the native heart," says William Wagner, a scientist at the University of Pittsburgh who studies technologies that can replace or restore heart function.

But Wagner cautions that this is just a first step and there's lots of work to do before people could get organs grown in a lab. "The limit right now is the cells," Wagner says, noting that this experiment used cells from newborn rats.

For this approach to be useful in people, scientists will have to find a human cell — preferably one that can be taken from an adult patient — that is very good at growing into new heart tissue.