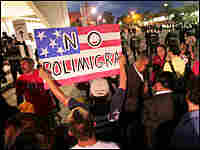 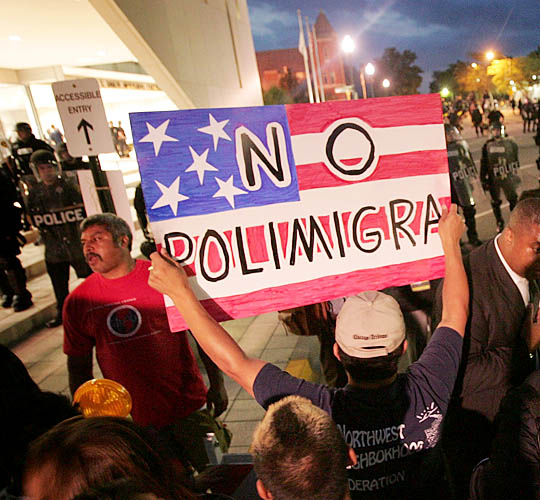 In the past decade, thousands of immigrants have settled among the rolling hills of Virginia's Shenandoah Valley, finding jobs in poultry processing, construction and the service industry. When local police would find they had arrested an illegal immigrant for some crime, they would call Immigration and Customs Enforcement.

But Rockingham County Sheriff Don Farley says that, as often as not, federal agents were so busy that the immigrant would make bail and disappear before they ever showed up, and there was nothing Farley could do.

"When I have to respond to my community about this problem," Farley says, "I don't want to say, 'Well I have a badge but it doesn't work on immigration problems; it only works on speeding and cats in trees and that type of thing.' I didn't feel good at all about that."

So last year, Farley joined nearly three dozen other police agencies that have signed on to a Homeland Security program that lets local officers hold people on immigration charges. Five of his deputies received five weeks of training in immigration law. That now lets them check the legal status of everyone booked at the county jail in Harrisonburg.

Officers can take fingerprints and check them against the federal immigration agency database. If there's no hit there, they can interview the suspect and investigate his legal status. If someone is deemed to be illegally present, the sheriff's office can then detain him and start the paperwork for the deportation process. Sheriff Farley says that since August, his force has detained 69 illegal immigrants.

"We're not going and pulling people off the street because they have a foreign look about them," he says.

Farley says he has taken heat from all sides over the program; immigrant advocates are worried that he'll conduct random raids, while others have criticized him because he's not conducting such raids. Farley says he has no plans to target otherwise law-abiding illegal immigrants who are simply providing for their families. For one thing, he has no space for them in his crowded jail.

"If someone wants to build me a 10,000-person jail, maybe I'll start looking at all the illegals," Farley says, "but that's not going to happen."

Instead, in addition to the checks at the jail, Farley's officers focus on immigrants who are suspected drug dealers and gang members.

Up a steep hill in Harrisonburg, Deputy Sheriff Corrie Bauserman patrols a run-down trailer park of mainly Hispanic families, pointing out layers of graffiti sprayed by competing gangs. In theory, Bauserman has authority to check the legal status of anyone here, even if there are no criminal charges against them. He's done that once. He says a gang member he knew to be here illegally was implicated in crime after crime, but the victims were afraid to press charges.

Bauserman dismisses fears that his new powers make people avoid sharing information with him. In fact, he says, Latinos here are eager to help because they are often the victims of the crimes he targets.

"To me, it's just a matter of fear-mongering," says Rick Casteneda, chairman of the Harrisonburg Area Hispanic Services Council. He says immigrants — even legal ones whose family members are undocumented — are indeed more afraid to report crimes now.

"I've had situations where people called me directly and said I had $1,000 or something stolen, and I have an idea who did it but I'm afraid to go to the police," Castaneda says.

Harrisonburg lawyer Aaron Cook says he appreciates that Sheriff Farley and his deputies exercise discretion. But he says the other local police forces that also use the county jail may not. Since everyone at the jail is checked, Cook says, longtime residents with jobs and families can be deported after minor infractions like reckless driving or petty theft.

Cook had one client that he says was wrongly arrested when she was a passenger in a car accident. Cook was able to get that charge thrown out, but because the woman's legal status had been checked at the jail, she was deported anyway.

Even within the law enforcement community, delegating immigration powers is controversial. Hubert Williams, head of the research organization Police Foundation, worries about racial profiling and about the burden local agencies bear with this new responsibility. Williams says studies show immigrants are less likely to commit crimes than the native born, so he believes this trend isn't as much about public safety as it is about politics.

"Right now (it's) being driven by impulse, emotions and fear of political backlash over the immigration problem," Williams says. "Over time, eyes will be opened, and people will give a lot more thought to the impact of this kind of decision."

Maybe. But right now, the movement toward local enforcement is so strong that the federal immigration agency has just set up a new office to coordinate it. The executive director is a former North Carolina sheriff, Jim Pendergraph, who says that every day he gets calls from other states interested in cooperating with ICE. In fact, demand is so great, Pendergraph has 90 local agencies on a waiting list to be trained in immigration enforcement.

"I don't see it reversing at all," Pendergraph says. "There have been too many people that have said immigration is a federal responsibility. Immigration is all of our responsibility, and it can never be successful without partnerships with state and locals."