Accessibility links
Gas Cloud Headed for Milky Way Collision Astronomers have discovered a vast cloud of hydrogen gas aiming straight for our galaxy. It will collide with the Milky Way in a mere 20 million years and likely trigger a burst of new star formations and stellar explosions. 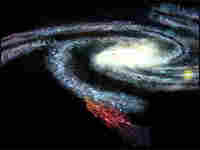 If you're tired of stressing about babysitters, health insurance, house payments and what to eat for dinner, here's something to put it in perspective.

Astronomers announced Friday that they have discovered a massive cloud of gas on a collision course with our home galaxy, the Milky Way.

The story starts in 1963, when a young astronomer in Holland named Gail Smith discovered a giant cloud of hydrogen gas, lurking just beyond our galaxy. She went on to do other things and the Smith Cloud was more or less forgotten.

But recently Jay Lockman at the National Radio Astronomy Observatory in Green Bank, W.Va., decided to take a look. He got interested. Obsessively interested.

Using a radio telescope, he mapped 40,000 locations in the Smith Cloud to cobble together a picture of what it looks like.

"It really looks like a comet," he says. "It has a very condensed head and these trails of gas billowing out behind it."

"Just one look at the image and you know it's falling into the Milky Way, there's no question about which way it's going," he says.

And it's huge. If you could actually see that cloud of gas in the sky, it would appear to be much bigger than the moon. And when it gets here, watch out! It's going to collide with other gas clouds that, at the moment, are sitting rather peacefully out in the nether reaches of the galaxy.

"New stars might pop out of them kind of like raindrops condensing out of a cloud, so the results could actually be quite spectacular," Lockman says.

But don't bother to set up your lawn chair just yet. We still have a little bit of a wait for it to collide with the Milky Way.

If it just keeps falling in toward the Milky Way and it's not slowed down by anything, it's going to hit in about 20 million years, Lockman says. And even then, it's not a worry for Mother Earth. It looks like the Smith Cloud is not going to hit our particular arm of the Milky Way.

"It's going to be about a quarter of the way around the Milky Way from the sun when it hits," Lockman says.

So there's no need to send Bruce Willis out to deflect it.

"But somewhere out there, about a quarter of the way around the galaxy, there's probably some astronomer looking up and saying, 'Oh wow! What is this thing coming toward us?'" Lockman quips.

There's someone more local who's also interested in this news. That would be Gail Smith, now Gail Beeger Smith, who discovered the cloud decades ago. She settled in Holland, is no longer an astronomer, but she's thrilled to hear that her cloud turned out to be exciting.

"If it's going to cause a catastrophe maybe I shouldn't be so happy about it, but of course it is exciting," she said in a phone interview. And when it does collide with the Milky Way 20 million years from now, at least she won't be around to take the blame.