Accessibility links
Extra Golden Members Stranded in Kenya When violence erupted after the disputed elections in Kenya, the turmoil has disrupted business and food supplies. Two Kenyan members of the international rock band Extra Golden have been severely affected by the riots, and now its American counterparts and fans are trying to help. 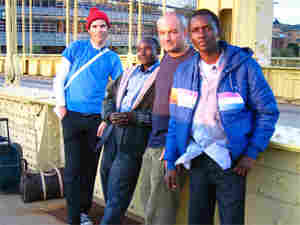 In the wake of Kenya's recent political violence, two of Extra Golden's members have been denied their livelihood in music. Noel Kupersmith hide caption

It's been more than two weeks since a disputed election in Kenya sparked riots that have claimed hundreds of lives. The turmoil has disrupted daily life for thousands more, with businesses shut down and food supplies interrupted. Three members of the international rock band Extra Golden are among those affected, and now the group's American members and their fans are trying to help.

When violence erupted in Kenya, much of the country ground to a halt. Singer Onyango Jagwasi and his band were supposed to play a gig in Kisumu, the country's third-largest city.

"They had gone there thinking they would play elections celebrations. They didn't," says guitarist Alex Minoff.

Jagwasi — who is from the same Luo tribe as opposition candidate Raila Odinga — was stranded 150 dangerous miles from his family in Nairobi. Finally, after 10 days, he was able to get his family on the phone.

"When I got them, all of them are crying," Jagwasi says. "Saying, 'Oh, no. Where, Dad, where are you?' It was really painful. It forced me to come back to Nairobi whether it was bad or good."

Jagwasi made the trip back to Nairobi on Sunday, only to find that his wife and children had fled to safety elsewhere, and his house had been looted. Now, he has to start a new life.

His old life had been as a musician, entertaining listeners and dancers in restaurants and clubs. He plays a style of music called Benga that's popular with many Kenyan bands.

Five years ago, American Ian Eagleson went to Kenya to research his dissertation on Benga. That's how he met Onyango's older brother, Otieno.

"When I got there for the year to do that research, he was my main collaborator [and] contact to meet other musicians," Eagleson says. "And I spent a lot of time with him. We got to know each other's ways of playing music."

They decided to make a record together with Eagleson's bandmate Alex Minoff, a guitarist for the Washington, D.C.-based group Golden. When Minoff arrived, there was no time for rehearsal. They taught the drummer the songs the night before, and the "studio" was the nightclub where Otieno Jagwasi sang in the house band.

"There was sort of a concrete slab that was sort of outside," Minoff says. "It was loosely covered by a tin roof. It was between the restaurant and the restrooms. We set up there, set up all our recording equipment. And about three hours later, we were gone."

The band called itself Extra Golden and named its first album Ok-Oyot System, after a Luo phrase that means, "It's not easy." And except for the music, it seems like nothing for this band has been easy. Before the CD came out, singer Otieno Jagwasi died of liver and kidney disease when he was just 34.

Still, the music gathered enough attention to get Extra Golden invited to the Chicago World Music Festival. But none of the Kenyan musicians had passports, let alone visas to get into the U.S. That's when Minoff put out a call for help to U.S. Sen. Barack Obama, D-Ill., whose father was Kenyan.

"I got through to a woman named Jenna Pilot," Minoff says. "And I went through my whole rant. I must have had 400 cups of coffee. There was a pause. And she said, 'Okay, I think I can help you.'"

With help from Obama's office, the band members made it to Chicago for the show, although just barely. They recorded a song of gratitude called "Obama" on the their second album, Hera Ma Nono.

The band's second recording session was very different from its first. With five days to record, Extra Golden laid down 20 tracks at a house in the Poconos. Everyone wanted to make the most of it.

The band members have seen each other only once since 2006. In the weeks after post-election violence erupted in Kenya, singer Onyango Jagwasi communicated with Eagleson and Minoff by phone and text message. With nightclubs closed, the situation for the Extra Golden members in Nairobi is desperate.

"Since they're out of work, there's no way to get food," Eagleson says. "Their children are getting sick from drinking dirty water. What I wanted [is] to help them some way. And cash is the way to do that."

So Eagleson and Minoff have turned to Extra Golden's fans for help. They posted a message on the band's Web site and MySpace page asking for $5 donations, and have since received hundreds of responses and raised thousands of dollars.

A the moment, however, Jagwasi is keeping a low profile with relatives outside Nairobi. He wants to start playing music again, but he doesn't know when that will happen.

"Now, nobody can enjoy music," Jagwasi says. "They are worried with what is going on in Kenya now. They are just watching news."