Accessibility links
'The Little Mermaid,' Heeling Hard to Broadway Port Critics say the latest stage production from the Mouse House has run hard aground — which just proves once again how hard it is to translate the magic of animation to the world of Broadway. 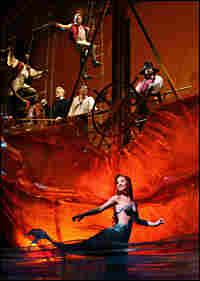 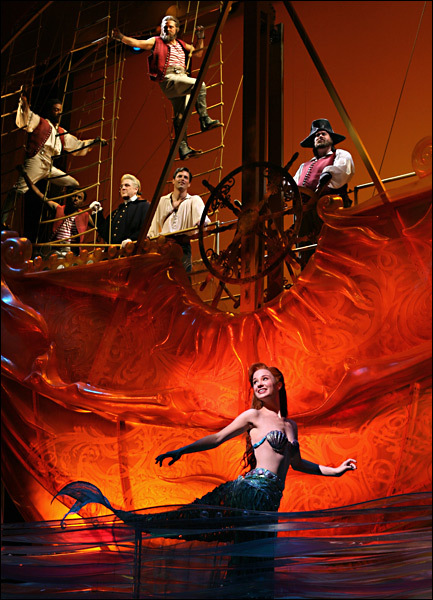 Ahoy, boys: Little Mermaid's Ariel (Sierra Boggess) does the siren thing for a shipload of sailors. 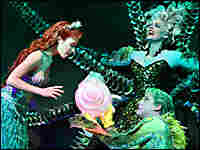 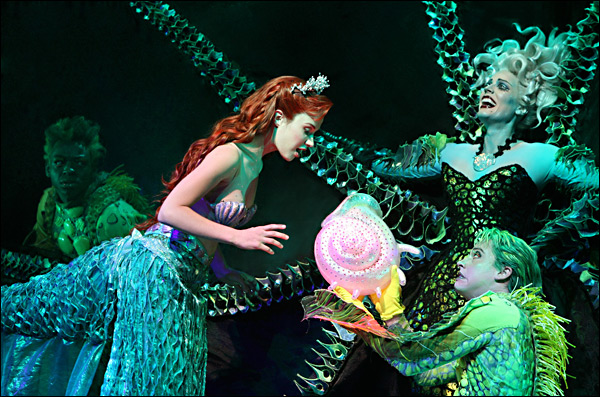 Last night, a new stage adaptation of Disney's much-loved film The Little Mermaid opened on Broadway. This morning, some pretty downbeat reviews washed up in the New York papers. Why is it so hard to make the magic world of an animated movie — one that takes place mostly underwater — work onstage?

After all, Disney's theatrical arm has put more than a few unlikely things on the Broadway stage over the years: dancing teapots and flatware, for instance, in Beauty and the Beast, and the animals of the Serengeti in The Lion King.

In animation, characters can swim, fly and bend in ways that have nothing to do with the laws of physics — particularly the law of gravity.

"You can be a mermaid in an animated movie and swim," says Disney Theatricals producer Tom Schumacher. But onstage, "you're obviously, no matter what, going to stand there."

But those laws are very much in evidence onstage, so a different kind of magic needs to be devised. Variety's chief theater critic, David Rooney, says that in spite of the challenges, Disney managed to beat the odds 10 years ago with The Lion King. That show featured dazzling puppetry and striking stage pictures from Tony Award-winning director Julie Taymor.

"Julie Taymor's ingenuity in that show was to be able to stage a stampede of animals ... a drought in the savannah plains," Rooney says. "All of these things ... were done very visually, very economically, with certain solutions that you would look at and think, Oh my god, that's so simple. And yet, at the same time, it's genius, and something that only somebody with a very interesting command of stagecraft would be able to summon up."

A Mermaid Princess, Aswim (and a-Wheel) in a Plastic Sea

To tell the story, about a mermaid princess who falls in love with a human prince, Zambello asked her designers to create abstract settings using translucent materials that would, she hoped, transport the audience from the sea to the land in a matter of seconds.

"We very much use a lot of plastic, and by lighting it in different ways, we suggest the underwater world," Zambello says. "But also, it suddenly becomes the sun above. So, it was really ... I don't want to make it sound simple, it was difficult to arrive at this solution, but it was really very much about working with special materials and creating sculpture and changing the sculpture through light and through projections."

Because so much of The Little Mermaid's world is underwater, choreographer Stephen Mear had to find a way to suggest swimming. He ended up making extensive use of Heelys — the kid-favorite sneakers with the wheels in their heels.

"I was walking through Disneyland, of all places, about two and half years ago, and ... I saw this kid just walk by me — and then, suddenly, whiz by me," Mear says. "And, at the time, I was looking for a [movement] language for the show — because we didn't want wires, because once you've got wires ... there is no choreography, you can only swing.

"And I just thought, Wow, that's fantastic. You know, you can dance, you can pirouette, you can jump — and then, suddenly, you can just glide somewhere else"

"To me, putting people on Heelys and [having them] wave their arms like they're swimming just didn't do it," he says. "What you get is the equivalent of an ice show. ... It doesn't have this sort of soaring feel to it."

Whatever the critical response, The Little Mermaid, like most stage adaptations of Disney films, has a built-in audience — people who know and love the animated movie. Producer Tom Schumacher says that's the power of the Disney brand.

"We also have 16 shows running around the world, tonight," Schumacher says. "Somewhere in the world you can see Aida, Beauty and the Beast, Lion King, Tarzan, Mary Poppins, Little Mermaid, High School Musical — it's what we do."

And The Little Mermaid? It's been sold-out since it began preview performances in November.