Accessibility links
Many Think Mafia Involved in Naples Trash Crisis The Italian city of Naples is suffocating under mountains of garbage. All the local dumps are full, and many Neapolitans, including author Roberto Saviano, believe it is the Camorra, a mafia organization, that is behind the crisis. 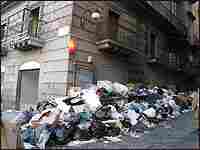 A street near San Carlo Opera House in Naples, Italy, is one of many filled with trash due to the recent garbage crisis. Sylvia Poggioli, NPR hide caption 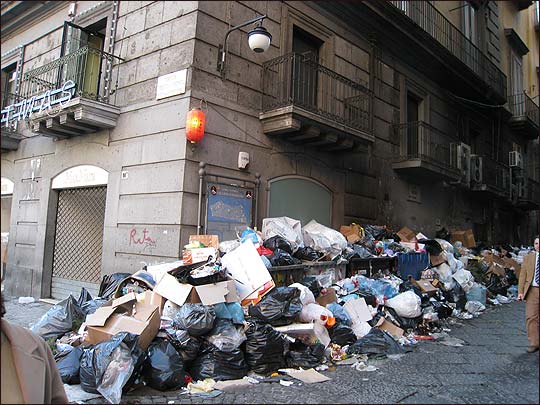 A street near San Carlo Opera House in Naples, Italy, is one of many filled with trash due to the recent garbage crisis. 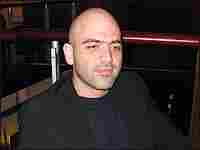 The Italian city of Naples is suffocating under mountains of garbage.

All the local dumps are full, and many Neapolitans believe Camorra, a mafia organization with huge economic power and political influence, is behind the crisis.

Roberto Saviano, the author of a griping and brutal account of how the Camorra works, has carefully studied the nuts and bolts of the group's waste-management business. It allows northern regions, like Tuscany and Umbria, to remain bucolic, while illegally dumping their waste at low costs in the south.

The Camorra has disposed of all kinds of dangerous toxic wastes from northern companies — printer toners, residues from leather tanneries, harmful dusts from pharmaceutical companies. That gets mixed with cement, non-metal car parts and even the remains of the dead from paupers' graves (which have to be disposed of every 50 years).

In a region where there are no high-tech incinerators, more and more agricultural land has been bought up for landfills, and medical research has shown the region's soil is increasingly poisonous — the long-term effects of which can only be guessed at.

"This led to a silent plague that has killed hundreds and hundreds of people. I am scared not only by what I drink and breathe, but what really terrifies me is the idea of having children," Saviano says.

Saviano goes everywhere with a 24-hour police escort. For more than a year, he has been living under a Camorra death sentence triggered by his book Gomorrah.

The book, the result of undercover investigative reporting and long research in court records, has sold a million copies in Italy and recently came out in the United States.

To get the story, Saviano, who is only 28, worked in an illegal textile factory, as a waiter for Camorra weddings and on construction sites.

Naples has the highest murder rate in Europe — more than 100 people were killed last year. The region has Europe's highest ratio of drug dealers to inhabitants.

While the mafia has a pyramid command structure, based on family clans, the Camorra is horizontal, a federation of groups that each has a high degree of decision-making autonomy, he says.

"They sell drugs outside, to Sicilians, Romans, in Lombardy, in France. It is banned for locals to consume drugs. If locals sniff coke, the bosses will break their bones," Saviano says. "They do that to control the territory and their subordinates. The Camorristi are also moralists: They don't want drug addicts or homosexuals among their ranks."

Saviano says in the suburb of Mondragone there's a group that goes around killing addicts and even people with HIV to ensure the virus does not spread. Besides cocaine, the other major Camorra activity is high-fashion knockoffs. Saviano says investigators have shown that the fashion industry is the Camorra's favorite sector to launder money.

"Every top Italian designer label is copied ... but none of these designers has ever denounced the counterfeiters. And the reason is that the knockoff market is actually useful for the designer label — it offers free publicity, it makes the designs visible all over the world, and it ensures their popularity," he says. "Moreover, very often, the originals and the copies are made with identical fabrics, in the same shops, by the same seamstresses. All controlled by the Camorra."

The Camorra understood globalization before many legitimate businesspeople did.

Saviano says the problem for authorities is that the Camorra's criminal enterprises are so closely enmeshed with legitimate businesses they are practically unassailable.

The Italian state and the European community are faced with a dilemma, the organized crime in Italy generates huge sums of money. The three major mafias have a turnover of 100 billion euros a year.

The small-business federation says organized crime is the biggest business in Italy — it accounts for 7 percent of GNP. This means that in an area where no one invests, organized crime is a major provider of jobs and controls votes.

Saviano says this means that one-third of Italy is in the grips of organized crime and condemned to a permanent state of underdevelopment.