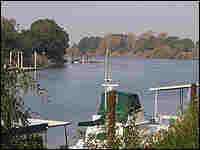 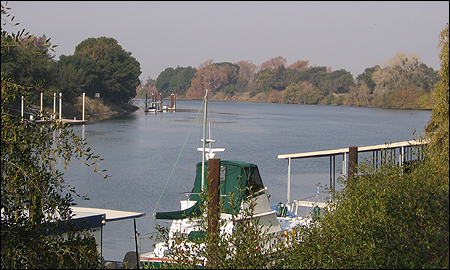 The Sacramento River wends through the old delta town of Locke, Calif.

A warming atmosphere also means a warming ocean. As water heats up, it expands and triggers a sea level rise around the world. By 2080, a U.N. panel predicts this will have devastating consequences for millions of people around the world — rich and poor alike. 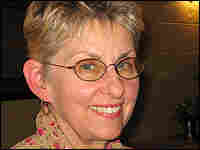 If you've never heard of the Sacramento Delta, you're not alone. Even people who live in California aren't too sure where it is. But the Sacramento Delta is crucial to the health of the state, and climate change is threatening the delta's very existence.

The Sacramento Delta is a small triangle of land just inland from the San Francisco Bay Area. It's where the fresh water from California's major rivers and the salt water from the Pacific Ocean meet. More than 20 million Californians get some of their drinking water from the delta. It also provides much of the water for California's huge agribusiness.

But rising sea levels threaten to turn the delta into a salty marsh, contaminating all that freshwater and flooding the homes and farms of delta residents.

"The delta of today is not sustainable even under today's conditions, never mind climate change," says geologist Jeffrey Mount.

Here's the problem. On one side of the delta is saltwater from the ocean. On the other side is freshwater coming down from California's mountain. And in the middle is the low-lying delta land, much of it below sea level.

About 1,100 miles of earthen walls called levees keep the land dry, and keep the salt- and freshwater from mixing.

Engineer Jay Lund says something has to be done, because he's certain of what will happen if nothing is done.

"The levees will fall down, the saltwater will come in, and you will not be able to pump water from the delta," he says.

And that means the freshwater Californians depend on could be lost.

"The forces arrayed against those levees are inexorable," Mount adds. "They will inevitably go."

Mount and Lund are part of a group of University of California, Davis professors who have been meeting every week for the past two and a half years to discuss the future of the delta.

Peter Moyle, the group's ecologist, says there are constant reminders about how fragile the levees are, including one in the spring of 2004.

"This was a nice June day, on a levee that had just been inspected the day before. It collapsed," Moyle says.

"Probably a beaver did it," Mount says. "How are you going to fix that?"

"And the state spent between $75 and $100 million to restore about $22 million worth of real estate," says Richard Howitt, the economist in the group.

It's partly economics that makes raising the levees impractical.

"Just to raise the levees one inch in this delta would cost you more than $100 million in materials," Mount says.

An Obstacle to Every Solution

But you have to do something to keep up with climate change. There are options, but every solution has its opponents. And any solution will be expensive.

One possibility is to build something called the peripheral canal. Right now, freshwater flows through the delta. But you can capture most of the freshwater before it even enters the delta. If you routed the freshwater around the delta, then you wouldn't have to worry if the levees failed. They would no longer be part of water supply equation.

"That was political poison for about 20 years," Mount says. "You simply did not talk about that as an option."

But if a peripheral canal solves the water-supply problem, it doesn't solve the flooding problems for the delta itself. And delta residents worry that once people get their water, they won't care what happens to the delta levees.

Marci Coglianese has lived in the delta for 40 years in the town of Rio Vista. It's on the Sacramento River, and one of several small towns scattered around the farmland of the delta. Coglianese is the former mayor.

About 4,500 people live in Rio Vista. Coglianese says getting the state to pay attention to the levees that keep her town from flooding isn't easy.

"I understand we are outgunned completely by powerful economic and political forces," she says. "And the reason we're terrified of the peripheral canal is that if we feel that we're not counting for much now, we're absolutely certain we'll count for nothing if that canal is built."

Coglianese says you can't use accounting tools to assess the value of communities like Rio Vista.

"We don't have movie theaters. We don't have malls. We have each other, basically, and it isn't fancy, it's plain, but it's a unique part of American life that is gone from almost everywhere," she says. "When you travel across the country, everything looks the same until you get to the small towns, and they have an intrinsic value that needs to be preserved and honored."

There is a process under way in California to come up with a plan for the delta called the Deltavision Blue Ribbon Task Force. Gov. Arnold Schwarzenegger created the task force to help chart a way forward in the delta.

Phil Isenberg chairs the task force and is a veteran of California's water wars. He says making tough decisions and then moving forward with them it tricky in a democracy.

"When voters are unhappy, they put measures on the ballot themselves, or interest groups do, and they just pile them on top of each other and have since 1911," he says. "It's not a wonder nothing happens rapidly. It's a wonder anything happens at all."

Isenberg says the California's competing interests are known as the "water buffalos." The big players are the farm industry, the urban water districts, the land developers and the environmentalists. Their biggest concern is that the much anticipated giant northern California earthquake will turn the delta into a disaster area. They aren't really focused yet on climate change.

"Global warming is a new kid on the block," he says. "And the funny side effect is to watch all of these water buffalos acknowledge that global warming's there, and then explain that's why their prior positions are even more necessary than they were before."

For the time being, life in the delta rolls along.

Steve Mello, a delta farmer, also hates the idea of a peripheral canal. But he predicts it won't be built. Because even if Gov. Schwarzenegger decides a canal is necessary, he won't be around long enough to see it through.

"When he is out of office, the next governor will come in, and what will happen?" Mello asks. "It depends on the political winds that are blowing then. How strong are the environmentalists, versus how strong are the builders in southern California? It's all about money, and water is money. John Wayne had a good quote: 'Whiskey's for drinking and water's for fighting over.'"

Actually, some attribute that line to Mark Twain. And climate change probably means there'll be plenty of drinking and fighting ahead.