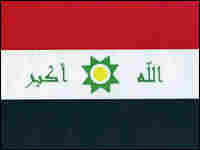 A new flag proposed for consideration by the Iraqi parliament. The new design removes the Baath party insignia and spells out "God is great" in standard script; the yellow circle in the center signifies Kurdistan. Kais al-Jalele/NPR hide caption 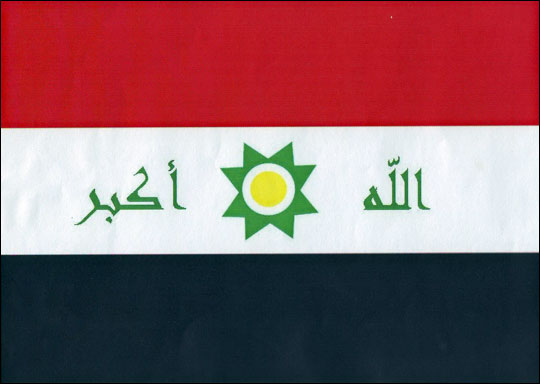 A new flag proposed for consideration by the Iraqi parliament. The new design removes the Baath party insignia and spells out "God is great" in standard script; the yellow circle in the center signifies Kurdistan.

Washington has pushed Iraq's Shiite-led government to pass the new "de-Baathification" law in an effort to bring more Sunnis into the political process and ease sectarian tensions.

President Bush had immediate praise for the new law.

"It's an important step toward reconciliation," President Bush said during his visit in Manama Bahrain. "It's an important sign that the leaders in that country understand they must work together to meet the aspirations of the Iraqi people."

Under the new law former low-level members of the Baath party can recoup government jobs. Many senior bureaucrats who knew how to run ministries, university departments and state companies were fired after 35 years of Baath party rule.

Haidar al-Abadi, an aide to the prime minister, said the new law provides balance, protecting the rights of victims while benefiting innocent members of the Baath party.

The new law still bans those who were most senior in the Baath party from government work; but unlike the earlier decree, senior Baathists will now be allowed to claim their pensions. Those who will benefit most are the thousands of mid-level Baathists who were fired.

The old law was ostensibly designed to give Iraq a fresh start by keeping members of the old regime's political party out of jobs where they could wield influence. But it also resulted in gutted ministries and helped fuel the Sunni insurgency.

Weedad al-Latiya, an educator for three decades, was fired as a school principal because of her Baath party rank. Last year she told National Public Radio that Iraq lost people of great experience even though they had not committed any crimes.

"You know it was mandatory to be a Baathist if you were a teacher. Otherwise, you couldn't get a job," she told All Things Considered in March.

For the past five years, despite repeated promises of a reprieve, she has not received a pension. In a telephone interview on Saturday Weedad said she was sitting in the dark because there was no electricity. She was doubtful about the new law, saying she'll believe there are really changes when they are actually enforced and she sees her money.

Under the new law, former Baathist Mohammed Ali Mohssen, an official in the transportation ministry, can return to government work but not to his former senior position.

In a telephone interview he said he returned from exile hoping for more, and that he too fears the government will not implement even the limited improvements.

The law comes after long, hard wrangling — an early draft offered former Baathists immunity from prosecution after three months. But Shiite and Kurdish lawmakers protested that was too lenient.

Some Sunni members of parliament like Mustafa al-Hiti said the final version was too severe, and in key places dangerously vague, opening the door for abuse.

This is just the first of many reform measures the U.S. has long pushed Baghdad to pass. But so far, a lack of consensus on key issues like states' rights has created a stalemate.

Parliament will next debate a new flag. Earlier efforts have failed. Kurdistan has pointedly refused to fly the old Saddam banner, underscoring the Kurds' growing separation from the rest of Iraq.

A new design removes the Baath party insignia, and instead of "God is great" scrawled in Saddam's handwriting, it is now spelled out in standard script; and right in the middle is a yellow circle signifying Kurdistan.