Accessibility links
Chronically Homeless See New Woes in New Orleans In New Orleans, work is almost complete on the first subsidized houses and apartments for thousands of homeless people with mental or physical disabilities. But they can't move in because Congress never came up with money to help pay the rent. 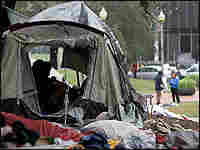 Many of the homeless in New Orleans had been living in Duncan Plaza, across from city hall. But the city recently fenced off the park as part of a new construction project. Chris Graythen/Getty Images hide caption 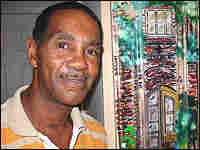 Tyronne Smith was homeless for months after Katrina. He started painting again when a group moved him into a new apartment. Joseph Shapiro/NPR hide caption 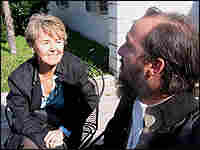 Ann O'Hara of the Technical Assistance Collaborative in New Orleans talks to Benjamin Parnell, a 38-year-old blind man who wants to move out of a nursing home so he can resume his normal life. Joseph Shapiro/NPR hide caption

Austin Earl is so poor that the only place he could find to sleep at night was a spot of hard grass in a city park.

Earl has few possessions. But even when you have almost nothing, it's still not safe to live on the streets of New Orleans.

"I got robbed about a week ago," Earl says. "Broad daylight, coming from the grocery store. Two youngsters.

"They took the money I had. Took my cigarettes, my lighter. I found my wallet about a block away. You know, to rob the homeless is something I really couldn't understand, but there's guys that does it. "

Earl, 52, has been on the streets for four years — even before Hurricane Katrina. He has a mental illness, but it's been a while since he's taken the medications he needs. He's one of an estimated 12,000 chronically homeless people in New Orleans.

Since Katrina, the city's homeless population has doubled, according to groups that work with the homeless. Almost all the city's affordable housing was destroyed.

So Louisiana came up with a bold plan to house the most desperate and hardest-to-help homeless people like Earl. The state is building thousands of new apartments and houses.

They're for "permanent supportive housing." The idea is to give the most chronically homeless people a permanent place to live.

Unlike in other programs, these people are not required to get off drugs or alcohol, or to get their mental illness under control before they can move in.

Just getting them off the streets is considered therapeutic.

According to the plan, when the homeless have found a permanent place to live, the state will offer them whatever social services they need to succeed in that house, from substance-abuse counseling to simple help in learning how to shop or how to balance a checkbook.

Congress gave the state of Louisiana millions of dollars to provide the social services the people need when they move into the new apartments.

It also gave millions of dollars of tax breaks to developers to build housing for homeless people. In return, the developers agreed to give low rents to the poor and to set aside at least 5 percent of their units to the most chronically homeless.

The first of those new homes and apartments will be available in the next few weeks.

No Money to Move In

But there's one problem: Homeless people are not moving in.

That's because Congress never got around to coming up with the third part of the program.

"What we don't have are the rent subsidies that will help people pay their rent," explains Ann O'Hara of the Technical Assistance Collaborative, a national housing group for people with disabilities.

For the last two and a half years, she's made dozens of trips from Boston to help Louisiana build these homes.

"We're at an incredibly critical point," she says. "Because if we can get the funding for the rent subsidies from Congress, then Louisiana will have a 3,000-unit permanent supportive housing system that will be in place for years and years and years. If we don't get these subsidies, then the whole program could fall apart."

Louisiana lawmakers believe Congress will come up with the $70 million this spring. But that's what they expected last year. And the year before.

Still Looking for a Normal Life

Before Hurricane Katrina, Benjamin Parnell, who is 38 and blind, shared a house with friends. He was self-sufficient. He cooked for himself and he had a job.

He lives in a nursing home now, he says, because he has no other place to go. His room has dull cinderblock walls and a flimsy pink curtain that separates him from the elderly man in the next bed.

Parnell says it would be great to have his own place, especially so he could get his electric guitar back and play his music.

When O'Hara arrives for a visit, Parnell is sitting outside to smoke. He's running a plastic comb through his long black hair and beard.

"Well, today the sky is blue with a little bit of white clouds kind of underneath the blue," O'Hara tells him.

"I'm going to tell you something, Ann. It must be beautiful to see."

"I bet it would be great if you had your own place to live, too," she says.

Out from Under a Bridge

After Hurricane Katrina, Tyronne Smith lived under a bridge. His life was out of control. He was depressed and addicted to drugs.

Now Smith has a place to live. A year and a half ago, a group called Unity of Greater New Orleans moved him into one of just a small number of permanent supportive housing units that already exist in the city.

He rents a three-room apartment for $80 a month. It's crowded with the brightly colored abstracts and landscapes he paints in the back room.

He says he knew his life had changed the day he moved into this apartment.

It was an overwhelming joy, he says, "to have a place over your head, to start your life all over again."

Permanent supportive housing has been used more widely, and with success, in other cities. Now thousands of homeless people in New Orleans are waiting to try it, too.