Accessibility links
The Lone Ranger: Justice from Outside the Law His story is fiction. Names, dates and other facts have all been revised in the 75 years since he hit the airwaves. But he's always on horseback. He always wears a mask. And he never accepts praise or payment.

Listen
The Lone Ranger: Justice from Outside the Law 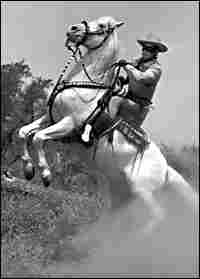 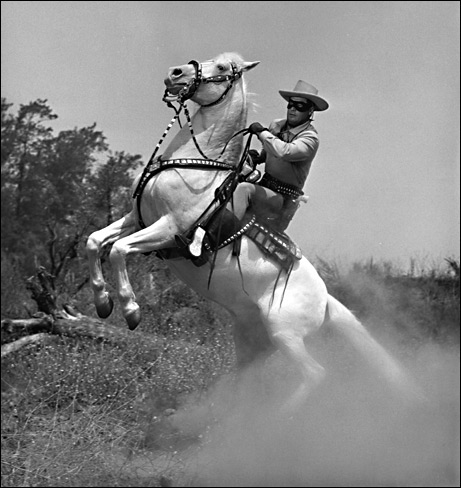 The 'In Character' Blog: Tell Us Which Characters Changed You 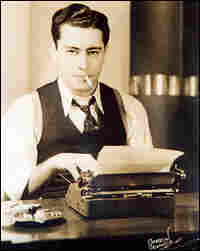 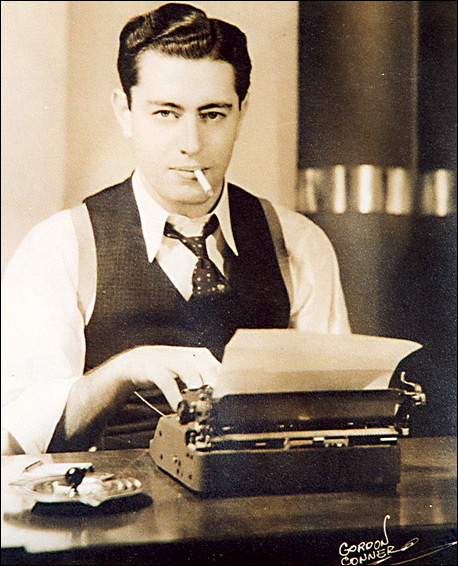 Fred Foy started as the announcer on the Lone Ranger radio show in Detroit back in 1948. And he filled the same job on the TV series that followed.

"We never dreamed that this would become a legend, when we were doing the show," Foy tells NPR's Robert Siegel.

At 86, Foy's still delivering the goods. For Siegel's on-air story, he read the opening narration from The Lone Ranger. You can hear that outcue here:

Fran Striker composed a creed for his vigilante hero, a statement of belief and purpose that's part of why the character still resonates with fans. It begins with these words: 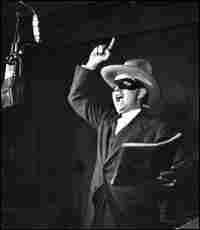 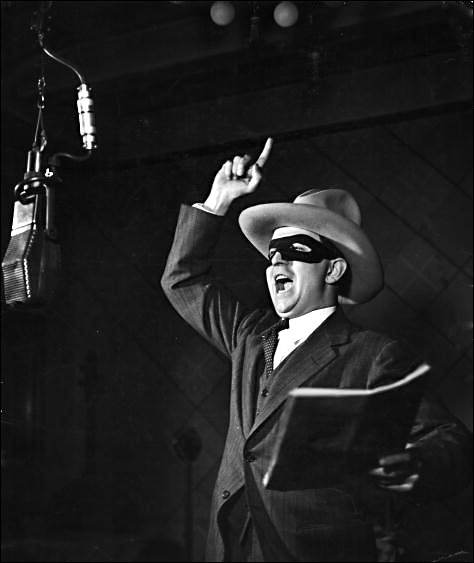 Earl Grasser, in the studio but masked anyway, portraying the Lone Ranger on the original WXYZ radio show on Jan. 1, 1937. 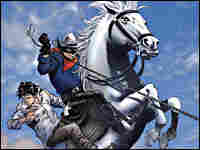 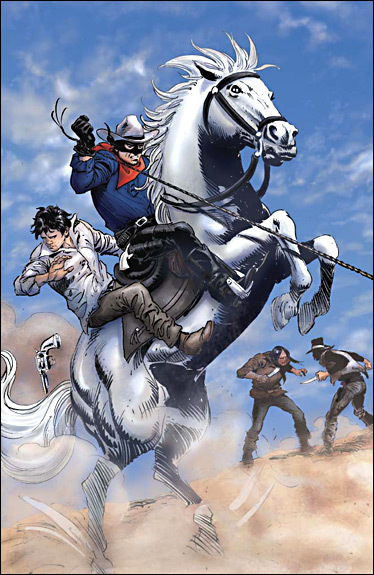 Why He's Drawn to the Lone Ranger

What Cassaday and Matthews Want to Achieve

Overhauling Tonto for a New Age

In 1874, six Texas Rangers were betrayed by a guide and ambushed at Bryant's Gap. Riding on a canyon floor, they came under rifle fire from a gang of outlaws on the cliffs above.

Five died; the sixth was left for dead and would have died that day but for an amazing coincidence: After the shooting was over, an Indian man happened upon the scene of the ambush. The ranger, who was wounded but still clinging to life, had saved that Indian from outlaw raiders a few years earlier, when the two were just boys.

The Indian recognized his boyhood companion, carried him to a nearby cave and nursed him back to health. Four days later, the surviving Ranger came to. And he asked his savior what had happened to his comrades.

The Indian showed him the graves of the other five Rangers — and did the subtraction. "You only Ranger left," Tonto said. "You Lone Ranger."

And he's been the Lone Ranger ever since — on radio, in movies, in novels, on television, in comic books.

His story is absolutely fictitious. Basic facts — names, dates, places — have all been adjusted and retrofitted over the 75 years since he first hit the airwaves.

But some things are always the same: He's always on horseback. He always wears a mask. He always pursues justice. And he never accepts praise or payment.

The Writer Behind the Ranger

In 1933, Fran Striker, a self-described hack writer, was in Buffalo, N.Y., writing radio scripts for, among other stations, WXYZ in Detroit.

And the owner of WXYZ, George Trendle, wanted a Western.

Striker started writing. And over the course of a dozen episodes, a character took shape: an expert rider, a marksman who never shot to kill, a paragon of virtue.

Gary Hoppenstand, an American Studies professor and editor of the scholarly Journal of Popular Culture, ranks the Lone Ranger among a handful of important iconic figures in American popular culture. He's a vigilante lawman who protects the criminal justice system by working outside it — a hero made for radio audiences of the Great Depression.

A masked vigilante who operated outside the bounds of government — but in the interests of the law-abiding public — resonated with that public. And he was "wonderful escapist enjoyment, as well," Hoppenstand says.

For the first 10 episodes of The Lone Ranger, the Ranger actually rode alone. (This was before they cooked up the backstory of the ambush at Bryant's Gap.) As writer Fran Striker told his son, Fran Junior, that posed a problem for creating dialogue.

"The Lone Ranger had nobody to talk to if he was a lone ranger," Striker says. "So it was suggested they create a sidekick for TLR. Script 11 introduced Tonto. And [he] was developed solely for the purpose of giving the Lone Ranger someone to talk to."

"I always looked at the Lone Ranger as like your idealized White Man and Tonto as the idealized Native American," says Mark Ellis, a writer and Lone Ranger fan who compiled a fictional timeline of the hero's life. "As a kid growing up, my idea of a Native American was based on, basically, Tonto, who was a good person. He was very moral. He was very smart, even if he spoke rather broken English."

"If the Lone Ranger accepts the Indian as his closest companion, it's obvious to the child listener that great men have no racial or religious prejudice," Fran Striker Jr. says. He says that in all the Lone Ranger episodes, there is never a disparaging word about any minority group.

Of course, what had sufficed as racial equality in 1933 could easily provoke cynicism by the time the show was on television in the 1950s and 60s.

"Bill Cosby used to do a routine where he could never understand why the Lone Ranger would always send Tonto into town for supplies, and then he would get beaten up," Mark Ellis remembers.

Behind the Mask, Bent on Revenge — and Adventure

In a contemporary graphic-novel treatment of the old story, Tonto acquires grammar. It's a darker version of the tale, a revenge story. But the familiar hallmarks are there. Including the mask.

Why the mask? Well, the idea was that the Butch Cavendish Gang — the bad guys who had killed his comrades in that ambush — should not know that one of them survived, and was out to seek revenge.

"And the mask, so the legend goes, was cut from his dead brother's vest," says Terry Salomonson, lifelong fan and collector of Lone Ranger memorabilia.

But why did he always wear the mask? Even when he and Tonto were riding alone across the Texas wilderness?

"Overcaution," Salomonson says. There's dialogue to support that theory: "No one is going to know I'm alive," says the Ranger. "I'm supposed to be dead, and I'm going to stay that way."

The mask, pop-culture professor Gary Hoppenstand points out, is "the very symbol of the outlaws" the Lone Ranger combats. But it's more than that.

"I think what it plays into is the audience's sense of escapist fantasy," Hoppenstand says. "The idea is that in their imagination, in their dreams, all they need to do is don their own mask, and they, too could have these grand and exciting adventures."

So who actually knew the face of the Lone Ranger? His nephew did. Tonto did, of course. And, as Salomonson recalls, President Ulysses S. Grant did. The two had a meeting at a railroad siding in St. Louis, as part of a 64-episode series about something called the Legion of the Black Arrow — "a particular group of individuals that were trying to carve out their country, so to speak, in the West," Salomonson says.

Grant, being the president, wouldn't talk to a masked man. The Lone Ranger, being a patriot, broke his rule just that once.

'Shiny Things for the Mind'

Something else about the Lone Ranger: He rode a white stallion named Silver. And his six-shooter fired silver bullets. Writer Mark Ellis says these accessories were designed to be indelible in the mind's eye.

"The silver bullets, the mask and the white stallion, Silver — those were what was known, I guess, in the old days of radio as 'shiny things for the mind,' so that the imagination could latch on and make it easier to visualize the characters and the places," Ellis says.

"My 4-year-old and I just stumbled upon some books we have, these Golden Books from the 1950s," Chabon says. "And my son was immediately rapt.

"There's something about the mask and the hat and the horse and the silver bullets and the faithful Indian friend — there's something really powerful there in that character," Chabon says. "There's some reason why the Lone Ranger continues to endure, even though he's far less visible now than he was."

The Lone Ranger — in character for 75 years, and still going.

"I believe that to have a friend,
a man must be one.

That all men are created equal
and that everyone has within himself
the power to make this a better world.

That God put the firewood there
but that every man
must gather and light it himself.

In being prepared
physically, mentally, and morally
to fight when necessary
for that which is right.

That a man should make the most
of what equipment he has.

That 'This government,
of the people, by the people
and for the people'
shall live always.

That men should live by
the rule of what is best
for the greatest number.

That sooner or later...
somewhere...somehow...
we must settle with the world
and make payment for what we have taken.

That all things change but truth,
and that truth alone, lives on forever.

In my Creator, my country, my fellow man."