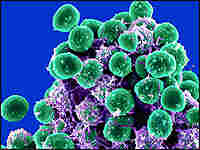 Staphylococcus aureus is mutating into strains that are resistant to more and more antibiotics. National Institutes of Health hide caption

So far, nearly all recognized cases of the multiply drug resistant staph have been among gay and bisexual men. The cases are showing up most often in San Francisco, Los Angeles and New York.

"We initially saw just a few sporadic cases," says Dr. Steve Boswell, the clinic's president and CEO. "But over a period of 18 to 24 months, the number of cases climbed significantly."

Currently one or two cases show up at the Fenway Center each week, Boswell says.

The infection ranges from mild to very serious. Across the country, a few men have even died.

MDR staph is related to an MRSA strain called USA-300 that has appeared in schools, prisons and athletic teams around the country. But MDR staph is even more resistant to antibiotics.

Ordinary resistant USA-300 staph can escape being killed by methicillin and other penicillin antibiotics. The new MDR type also resists treatment by clindamycin, which is often recommended to treat resistant staph. It's also resistant to erythromycin and to mupirocin, a topical antibiotic that's used to kill lurking staph on the skin to prevent recurrent infections.

Ominously, the new MDR variant has in some cases shown it can develop resistance to even more stand-by antibiotics, such as vancomycin and Bactrim. That would leave doctors with perilously few, and costly, alternatives.

"They grow much more rapidly," he says. "Hours can make a difference."

An article in the online version of the Annals of Internal Medicine documents the spread of MDR staph. Its first author, epidemiologist Binh An Diep, says the bacterium has made striking inroads in some communities.

Among gay men with resistant staph infections, Diep says, about 20 percent in San Francisco and up to 50 percent in Boston "are infected with this more-difficult-to-treat form of USA-300."

Incidence of the new variant is 13 times higher in San Francisco's heavily gay Castro neighborhood and surrounding zip codes than in the city's general population.

That concentration — and the fact that many infections appear on the buttocks and the genital region — is leading researchers to suggest that MDR staph is being spread through sexual contact. That leads some to worry this new infection could stigmatize gay men once again.

"We are worried about the fact that this could be taken to mean that this is another gay man plague," Diep says. "This is really not what we want to push forth here. I think there's a message of hope — that just soap and water is the best defense against community-acquired MRSA infection."

Even so, experience suggests the MDR staph won't stay confined to the gay community.

"Because USA-300 and other Staph aureus are so easily spread — just through [skin-to-skin] contact transmission — we don't think it will be restricted to the men-who-have-sex-with-men population, but will be spread into the general population," Diep says.

Already, researchers have found the new variant in an 81-year-old woman in New York City. 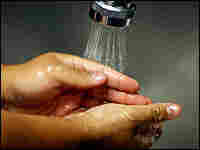 - Washing your hands thoroughly with soap and water or using an alcohol-based hand sanitizer.

- Cleaning and covering cuts and scrapes until they are healed.

- Avoiding sharing personal items such as toothbrushes, razors and towels.

MSRA infections have garnered much news coverage recently because of the release of the first nationwide study of the bacterium published in the Journal of the American Medical Association.

The study, conducted in 2005, showed a surprisingly high number of MRSA infections, which are a type of staph infection. This type of infection was found to be three times more prevalent than previously believed.

Recent studies are also showing that the germ is continuing to evolve into strains that are resistant to even more antibiotics.

Here are some answers about MRSA:

MRSA stands for methicillin-resistant Staphylococcus aureus. Staph is a common bacterium, present on the skin or in the noses of about 20 percent to 30 percent of the population. It's usually nothing to worry about. MRSA is a strain of staph that has become resistant to treatment with antibiotics, including penicillin, amoxicillin, oxacillin, methicillin and others. That makes MRSA harder to treat than regular staph infections.

Both often start out as mild infections on the skin, showing up as pimples or boils. Infections with garden-variety staph are easily treated in most cases. Both staph and MRSA can cause more serious skin infections or they can lead to pneumonia or infections of the bloodstream, urinary tract or the lining of the brain. Surgical wounds are often prime targets for these germs.

How do you catch MRSA?

MRSA is nearly always connected to health care facilities. Most people who have MRSA have been hospitalized within the past year, or they've gotten treatment in an outpatient facility or nursing home. People can acquire MRSA in health care facilities but not show any signs of infection for weeks or months.

But in recent years, MRSA has spread beyond these facilities into places where people are in close contact, such as athletic facilities. The Centers for Disease Control and Prevention (CDC) estimates that about 15 percent of MRSA cases in the United States occur outside health care settings.

Skin-to-skin contact with a person who carries MRSA is believed to be the most common way people get MRSA in the community. In this situation, people who are otherwise healthy may get a skin infection with MRSA. It's also possible to get MRSA from surfaces that are contaminated with the germ, but this is less likely than person-to-person contact.

Who is at risk for MRSA?

The CDC says it has investigated clusters of MRSA skin infections among athletes, military recruits, children, men who have sex with men, and prisoners. Risk factors include close skin-to-skin contact, openings in the skin such as cuts or abrasions, crowded living conditions and poor hygiene.

Recommendations for preventing infections in schools focus on good hygiene. Cleaning regimens vary from district to district. The CDC says that in most cases, it is not necessary to close schools because a student has an MRSA infection. Covering infections will greatly reduce the risks of surfaces becoming contaminated. The CDC says the only surfaces that need to be cleaned are those that have been recently touched by someone with MRSA. "In general," the CDC says, "it is not necessary to close schools to 'disinfect' them."

What about health clubs?

The CDC says that the environment has not played a significant role in MRSA outbreaks, but it advises that you always practice good hygiene. At health clubs, this would include showering after working out and using a barrier such as clothing or a towel between your skin and shared equipment. The CDC also recommends wiping surfaces of equipment before and after use.

Why the sudden outbreak of MRSA?

There hasn't been a sudden increase. Drug-resistant staph germs have been spreading across the country for years now, causing deaths from time to time. In the JAMA study published last fall, the CDC estimated that 94,000 Americans get potentially life-threatening MRSA infections every year. That's three times the previous estimates and came as a surprise to many people.

How is MRSA treated if it is resistant to antibiotics?

So far, MRSA is not resistant to all antibiotics. Vancomycin is one treatment. If your doctor prescribes an antibiotic, take the whole prescription — stopping too soon can cause bacteria to become resistant to that antibiotic.

What is the new resistant staph being reported in gay communities?

It's a variant of the MRSA that's spreading nationally. It's resistant to more antibiotics than regular MRSA — not just penicillin-type drugs like methicillin but also clindamycin, erythromycin and mupirocin. The new strain is called multiply drug-resistant MRSA (MDR-MRSA).

The strain has caused serious infections in hundreds of people so far, mostly in the gay communities of San Francisco, Boston, Los Angeles and New York. Doctors say these infections are more fast-moving, so any delay in recognizing them and treating them with the right antibiotic can cause life-threatening infections.

Researchers think many of the infections so far have been transmitted during sexual activity. But MDR-MRSA is spread through skin-to-skin contact and sometimes by contaminated surfaces or shared towels. So anyone can get infected. The precautions are the same — frequent and thorough washing, and immediate attention to any boils or painful rashes.