Accessibility links
KT Tunstall Savors the Life 'Fantastic' With a soaring career and a marriage on the way, the Grammy-nominated singer-songwriter is having a really good year — and it's only January. The Scot stops by to sing a few songs off her new album, Drastic Fantastic. 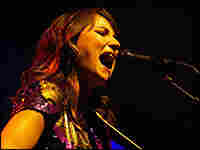 We've all heard about the Beatles on the Ed Sullivan Show. Comedian Steven Wright's career was launched when David Letterman liked his act so much, the host invited him back the very next night. But in today's multimedia, million-channel world, it's increasingly rare that just one or two TV performances have that much impact on a performer's career.

Two years ago this week, Scottish musician KT Tunstall appeared on the Today Show with nothing but an acoustic guitar, a tambourine and an array of foot pedals on the floor in front of her. Folks on her message boards are still competing to find the highest quality video of that performance.

Next, Katharine McPhee covered Tunstall's "Black Horse and the Cherry Tree" on American Idol. Then Tunstall's music was included in the film The Devil Wears Prada and she was off. Her debut album, Eye to the Telescope, went on to sell 4 million copies worldwide. Her sophomore effort, Drastic Fantastic, debuted in September at No. 9 on the billboard chart.

But what seems like an overnight success story is actually the result of more than 15 years of hard work. And if Tunstall has anything to say about it, there will be many more chapters written. In this interview she talks about the impact of success on her music, the genesis of her guitar style, and what it's like to play music for her deaf brother.

On our blog, video: KT Tunstall performs "If Only" live and gives a demonstration of how she uses a loop pedal to become her own one-woman band.