Accessibility links
Melancholy Gloom, Beautiful and Bruised In "Serpentine," it takes about 40 seconds for Chris Bathgate to introduce himself as a skilled purveyor of lovely gloom. Throughout the song, a variety of handsome instrumental window dressing obscures a sad rumination on estrangement. 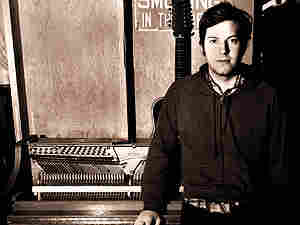 About one second into "Serpentine," it's clear that Chris Bathgate knows his way around pretty, minor-key indie-folk: The mournful piano line which opens the song makes that instantaneously clear. One hauntingly dusky verse later, he goes one step further, unveiling a ghostly series of "oohs," each as infectious as it is portentous. In all, it takes about 40 seconds for Bathgate to introduce himself as a skilled purveyor of lovely gloom — and if that's too much time, a mere glance at the interior album artwork shows an image of cartoon cats in formalwear, carrying a coffin.

After dumping out his toolbox in the time it takes most singer-songwriters to make sure the microphone is on, Bathgate spends the rest of "Serpentine" fiddling with his toys, introducing strings and yet more sad piano sounds as he goes along. All that handsome instrumental window dressing obscures a sad rumination on estrangement — "Does my name sting your tongue? / Now does it, babe?" — but that's no surprise. If Bathgate has mastered one thing in his young and enormously promising career, it's the art of distilling alienation into bruised-sounding beauty.