Accessibility links
The Rise and Fall of Vee-Jay Records It's not often that you hear of a record company being destroyed by success, but that was the fate of one of America's most prominent soul labels, Vee-Jay Records. They recorded John Lee Hooker, the Four Seasons and Betty Everett, but the music has been unavailable for decades. A new box set ends the wait.

Listen
The Rise and Fall of Vee-Jay Records 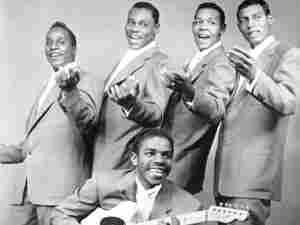 It's not often that you hear of a record company being destroyed by success, but that was the fate of one of America's most prominent blues, jazz, and soul labels, Vee-Jay Records. The music they recorded fell victim to legal problems after the label's collapse and has been unavailable for years, but now, Vee-Jay has launched a reissue program with Shout! Factory records. Vee-Jay: The Definitive Collection is a four-disc set that came out this past summer.

In 1953, Vivian Carter Bracken and her husband, James, borrowed $500 from a pawnbroker because they wanted to record a group they'd found in Gary, Ind., where they owned a record store. They took their initials, V and J, and Vee-Jay Records was born. Right away, they had success — so much so that they had to lease the record, Baby, It's You by the Spaniels, to another label for distribution. But it was a Top 10 hit, and by the time the group's second record came out a year later, the Brackens were on firmer financial ground and had a crossover hit on their hands.

Naturally, this attracted attention, so when a Chicago slaughterhouse worker named Jimmy Reed walked into their store asking to be recorded after being turned down by Chess, they did a session with him. The first record they put out by him went nowhere, but the second one was a Top 10 R&B hit.

With that, Vee-Jay was on the map. Another doo-wop group, the El Dorados, took off soon afterward with "At My Front Door," also known as "Crazy Little Mama," which was a Top 10 crossover hit, and the Brackens moved their operation to Chicago. There was talent all over the place, and Chess — which was located just across the street from Vee-Jay for a while — wasn't taking it all. Perhaps because Vivian had a radio background, she was able to get Ewart Abner, Chicago's top promotion man, to join her team. Convincing her brother, Calvin Carter, to become the label's talent scout was probably a bit easier.

While Chess continued to focus on blues, Vee-Jay knew there was something new happening, and in 1958, it discovered a group that not only recorded a Top 10 hit right out of the box, but also became deeply associated with Chicago for the next 40 years: The Dells.

If the Dells were a harbinger of soul music, the other group the label recorded that year was already making the transition. Jerry Butler and the Impressions made "For Your Precious Love," but soon went their separate ways. Butler stayed on to become another Vee-Jay hit machine. Not that the label gave up on classic doo-wop, recording one of the great cult masterpieces of the genre.

Nobody's quite sure what Sheriff and the Ravels are singing on "Shombalor," although there are references to chicken knees and Nazis along the way. Vee-Jay was also home to one of the last great doo-wop records, 1961's "Duke of Earl," by Gene Chandler.

By then, Vee-Jay was one of America's top labels, with a strong jazz catalog, some top gospel groups, and Jerry Butler, Jimmy Reed, John Lee Hooker and Betty Everett cranking out hit after hit. The first hint of disaster came in 1962, with their biggest record to date.

The Four Seasons hit "Sherry" was so big that Vee-Jay's owners found themselves without the money to pay for pressing more copies of the records, although the label stumbled along for a while. The worst thing it could have done would be to sign another hit group, but it did. And what a group: Capitol Records already had passed on the option to release The Beatles in America, but the Brackens jumped at the chance. "Please Please Me" and "From Me to You" both came out on Vee-Jay, followed by an album at the end of 1963. The Four Seasons and the Beatles both went to greener pastures, and Vee-Jay wound up in court, its day in the sun over.

The Success and Undoing of Vee-Jay Records

The Success and Undoing of Vee-Jay Records 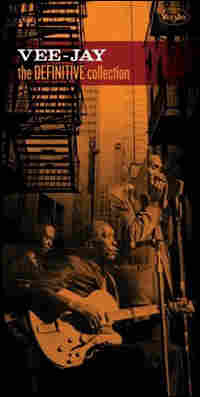 'I Wish You Would' by Billy Boy Arnold

'High and Lonesome' by Jimmy Reed and His Trio

'I Love You Honey' by John Lee Hooker

'I Don't Know What You've Got, But It's Got Me' by Little Richard

In 1953, Vivian and James Bracken from Gary, Ind., borrowed $500 from a pawnbroker to start a record company. Thirteen years later, Vee-Jay Records became the country's biggest independent, black-owned record label, and for a time, it was bigger than Motown.

Vee-Jay was even the Beatles' first American label. Yet three years later, the company folded, leaving behind $3 million in debt, a slew of hits and a rich legacy of black American music captured on the four-disc Vee-Jay: The Definitive Collection box set compiled by Michael Ribas, a longtime fan of the label.

The story of Vee-Jay is littered with irony. The Brackens spent the entire $500 on their first recordings — including "High and Lonesome" by Jimmy Reed — but had no cash to actually distribute those records.

Catering to the big blues and gospel market in nearby Chicago was a wise choice. Reed was Vee-Jay's first star and helped the label take on local blues giant Chess Records.

A year later, Vee-Jay released "Uncloudy Day" by the Staple Singers, with a 12-year-old Mavis on lead vocals. The Staples went on to international fame with Stax Records. Vee-Jay was doing well with regional hits but had yet to crack the mainstream. That changed in 1958 with "For Your Precious Love" by Jerry Butler & the Impressions.

Jerry Butler & the Impressions soared on the charts, selling nearly a million copies. But the Impressions, including Butler's childhood friend Curtis Mayfield, took umbrage at the billing, and they soon disbanded, only to surface big-time later at Motown Records.

Vee-Jay's records were crossing over into the pop charts, but the label could not seem to capitalize on its success. Vee-Jay had recorded a novelty song by Hank Ballard & the Midnighters, "The Twist," but never released it. A missed opportunity perhaps, but then, that same year, label-hopping John Lee Hooker had a big hit with "I Love You Honey."

Despite growing success and trend-setting artists, Vee-Jay was having money problems. Even in the era of payola, the label was known in the industry as being very generous. According to the box set's compiler, Ribas, business manager Ewart Abner in particular had some unusual practices.

Ribas says, "As they got bigger, he came up with crazy, crazy schemes. He would take the payroll, and fly to Las Vegas, and gamble it off. And luckily he won a few times. And that kind of got to his head and made him think that he could help run the company by gambling.

"Another crazy stunt that he pulled was there was a big convention for black DJs. He flew in 15 Scandinavian prostitutes, fresh from Scandinavia directly to the convention. And you can understand why he was having pop hits because he was doing things like that! He knew exactly how to get his records played."

Vee-Jay was in the big league and decided to do what no other black-owned label had dared to do: It began signing white acts, among them Hoyt Axton and, under license, The Four Seasons.

In 1963, British label EMI offered Vee-Jay a group that had been turned down by Capitol Records — The Beatles. Vee-Jay did not really want the Beatles, either. It wanted another EMI hit, "I Remember You" by Frank Ifield, which was a monster smash worldwide at the time. EMI told Vee-Jay it could have the hit but only if it also agreed to take the other group.

It sold 2.5 million Beatles records in one month, but Vee-Jay could not keep the records pressed and on the shelves or pay the artist royalties. Then, to strike another blow, lawsuits came from both the Four Seasons and Capitol Records, the latter regretting that it had passed up the Beatles.

Vee-Jay shut its doors in 1964. For a label that had once been ahead of its time, it was over. Eerily, one of the last singles was from an icon of the past: Little Richard, in full gospel mode on "I Don't Know What You've Got, But It's Got Me," featuring a young Jimi Hendrix on guitar.

In the end, Vee-Jay's success was also its undoing, and it is easy to view the label as just a footnote in the career of the Beatles. But more important is the enormous influence of its catalog, particularly the blues of Reed and Hooker. The sound of pop music would be very different if it were not for the likes of Vee-Jay Records. Ask the Rolling Stones. Ask the Beatles.