Accessibility links
The Magnetic Fields: Dourness and 'Distortion' The band's new album, Distortion, was influenced heavily by the feedback-laden guitars of The Jesus and Mary Chain. Songwriter Stephin Merritt and his band set typically glum lyrics to loud, fast, and fuzzy instrumentals. 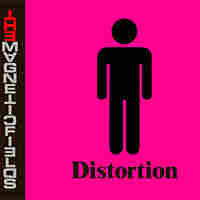 In fall 2007, Stephin Merritt came to NPR Studio 4A to write and record an entire song — in two days. The results are documented with video on NPR's Project Song: 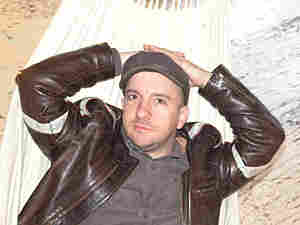 In the '90s, Stephin Merritt's primary band, The Magnetic Fields, released six albums, climaxing with the three-CD 69 Love Songs. In this decade, it's released just two albums, but the latest was well worth the wait.

One reason people love Stephin Merritt is that he's neat. He prefers shapely tunes to messy emotions, which he keeps at an ironic distance while writing in the first person. And though we call The Magnetic Fields a rock band — because what else can we call it? — the ukulele he likes to wield isn't exactly built for rocking out. So what will his adoring fans think when they put on the band's new album, Distortion?

Merritt wanted to finish this album quickly, with the same instrumentation on every song. He also wanted a contrast with 2004's i, which he describes as "self-consciously soft-rock." So he turned to one of his favorite rock albums, The Jesus and Mary Chain's feedback-heavy 1985 classic Psychocandy. I'm sure he's telling the truth about this — he had to try hard to get feedback out of cello and piano. The new album is loud, fast, fuzzy.

But there are some differences from Psychocandy. The Jesus and Mary Chain are true formalists, which is why Merritt loves them. But compare them to "California Girls," from Distortion: "They come on like squares / then get off like squirrels / I hate California girls." It's a very Merritt-like turn of phrase, followed by John Woo's guitar rising distinctly from the murk. This is far from neat. But it has a lot more definition, and wit, than Psychocandy. Shirley Simms, who splits the vocals with Merritt, is also a force for clarity.

In 1999, The Magnetic Fields arrayed 69 songs about love over three CDs, a once-in-a-lifetime opus Merritt will never match. But to me, this new album he's tossed off has a consistency and weight that's more impressive than any of the other numerous products of his fecundity and facility. Distortion has it both ways: It rocks out, and its momentum counterbalances Merritt's typically dour mood.