The third report in a four-part series 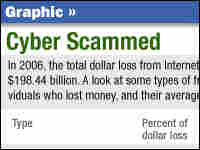 See the Most Common Types of Fraud Reported by Victims
Alice Kreit, NPR 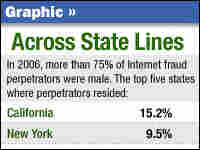 At the Federal Bureau of Investigation, "bot roast" isn't the latest mystery meat from the agency's cafeteria.

It's the name of an investigation that has caught criminals responsible for more than $20 million in economic losses to computer users. The criminals use botnets — scores of compromised computers that they take over and control — to commit identity theft, launch denial-of-service attacks and install malicious software that logs users' keystrokes.

Since June, "Operation Bot Roast" has caught eight people who have been indicted, pled guilty or been sentenced for botnet-related crimes. Additionally, 13 search warrants were served in the U.S. and by overseas law-enforcement partners in connection with the operation.

The agency's investigation reflects a worldwide explosion in cyber fraud. In 2006, the latest year for which data is available, complaints to the FBI's Internet Crime Complaint Center dipped 10 percent to 207,492, but total losses by individuals rose 8 percent, to $198.4 million.

Perpetrators are increasingly organized and span the globe, says Shawn Henry, deputy assistant director of the cyber division at the FBI. Members of cyber fraud networks share profits and carry out crimes depending on their expertise. One member might write spam e-mails, another may harvest credit card numbers, while others launder money and make financial transfers.

"They never meet, never see each other and never touch each other, but they are organized and they are together," Henry says. "That's an 'ah ha' moment, when we watch crime move from the physical world into the virtual world."

As law enforcement devotes more resources to fighting cyber fraud — the FBI has agents in 60 countries investigating cyber crimes — individuals have a responsibility to protect themselves, says Susan Grant, director of consumer protection for the Consumer Federation of America.

She warns computer users to be extremely skeptical of offers for free or cheap deals. She says computer users should never accept offers to wire money for others in exchange for a profit, and users should not accept check or money orders to send to third parties. And promises to win, borrow or inherit money in exchange for a fee are almost always a scam, Grant says. Still, "people from all walks of life can be scam victims. No one is immune."

Liane Hansen visited the Computer Crime and Intellectual Property Section of the U.S. Department of Justice to find out more about cyber fraud and how to prevent it.